Birds Of The Past Present And Future 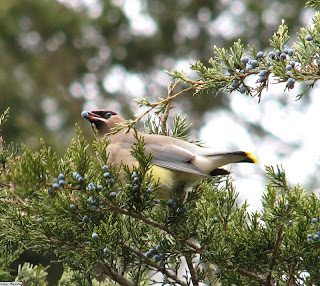 I happened to notice over the last month just how many versions there are of Charles Dickens' A Christmas Carol. Most of the time they change a few details around and give it a new name but in the end they are basically the same story. This gave me the idea to organize this post into birds of the past, present and future.

Part 1-Birds of The Past-Salmon River Christmas Count: I have participated in the Salmon River Christmas Christmas count for the last few years by joining other birders to count birds in my home town of Portland. It was nice just being one of the birders and not having the responsibility of being a team leader. This year I received a call from the group leader of Portland telling me that their was a vacant spot in the East Haddam territory because the captain of that area, had recently moved to Texas. She wanted to know if I could take his place in covering his former territory. I wasn't overly excited about the idea. First of all, Clay is a great birder. He even found a Western Tanager a couple of years ago during the Christmas Count. He went all out to do this count including owling and even searching for ducks by using his canoe. Those were shoes that I knew I couldn't fill but I decided to do my best to try to help out. 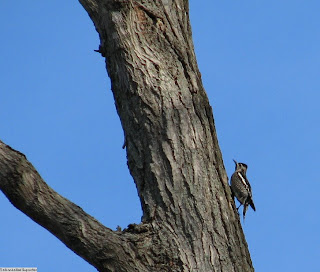 I started out by making three dry runs through the territory before I was comfortable with the area. I was able to get help from three other excellent birders. Thanks to Adrian, Beth, and Andrew! I wouldn't have been in over my head without them.

Some of the highlights included:

Over all, I think we did okay considering it was the first time we covered the area. The most challenging part was trying to figure out how much time to invest in each area before moving on. I was supposed to take part in another count but it was postponed due to weather. That should be coming up this weekend. 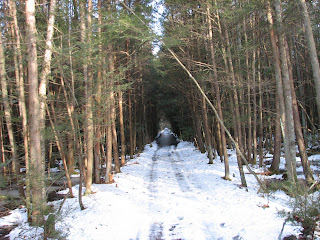 Part 2- Birds Of The Present- I spent this weekend camping at Pachaug Forest in Voluntown, Connecticut. Yes, I do know that it is December. It was a bit chilly with a temperature of about 20 degrees but that's a heatwave in places like Minnesota. People that know me aren't even surprised any more when I tell them that I'm doing something......unconventional.

There was one other camper when I first arrived. It did appear that they had a wood stove in their tent as evidenced by the chimney jutting out from the top. I didn't see many birds outside of the usual Hermit Thrushes, woodpeckers, Kinglets, creepers and other assorted winter woodland birds. I was hoping to come across some winter finches but that never happened.

When the night set in, I was all alone. I thought it fitting when the song here -Here Comes The Night started playing on the radio. I have to admit that it was a little creepy being out there alone. I could feel my adrenaline rise a little making me more aware of sound and movement in the vast darkness surrounding me. In the course of every day life , the accumulating number of minor concerns can lead to anxiety that doesn't make make a lot of sense to me. At times I can feel anxious or stressed out without even knowing what the cause is! We are prepared for fight or flight, but against what? At least in the woods I know what the source of my fear is. Being alone in the woods and surrounded by darkness makes you more vulnerable. The unlikely possibility that someone or something may sneak up on me does sometimes enter my mind. I consider that feeling just part of my camping experience and it really doesn't bother me. Spending time alone in the woods gives me a chance to clear my mind of needless thoughts. It is kind of like clearing temporary files/cache from an Internet browser.

I regret not having recorded the vocalizations of an owl that I heard the last time I was camping. This time the owls were fairly quiet but if you listen closely to the video you will hear an owl call out with a short hoot at the beginning and then again at the end of the video.

Can you hear the owl call in the background? What kind of owl do you think it is?

Part 3-Birds Of The Future:

Some of you may remember this game from last year. Simply keep a list of every species of bird that you see in January in your home state starting January first and ending January 31st. Every species you see in your state counts whether you see it at home, work, or while you're out birding (except for dead or captive birds). Remember, a House Sparrow is worth just as much as a Snow Bunting! I set a goal to see at least 90 species. I'm really hoping to reach 95 or more this year. Set a goal that is realistic for you in your particular state and try to reach or exceed it.

Why? you may ask. Because, It makes the month of January more fun!

I'm not a birder, but I'm glad you liked my brief encounter with the chickadees. Be well.

I camped in the snow once...ONCE...tee hee.. It was a record minus cold...and I wont do it again...
Loved the video clips..and the owl hoots...
Happy New Year to you and yours!

You're a brave man, Larry. I prefer inside plumbing and electrical outlets. I did enjoy the owl...creepy, but I can't identify it. Not a GHO. That's all I have for ya.

And, I'm in for the January count.

Anvilcloud-yes-I will be trying the peanut butter method to draw in the chcikadees.

dawn-surprisingly,the cold wasn't an issue but I did spend more time than usual trying to gather firewood.

Mary-Glad you will be participating in the count.-"Brave"-that is a nice choice of a word-I'll bet other words may have crossed you're mind.

I was wondering if you would be doing winter camping this year. I do like the video of the fire and Owl. No guesses on the species though, as my contact with owls has been limited to one silent Snowy Owl. I will have to see about the January bird count. It is -20 C here today. (below zero F)

Hi Larry, thank you for stopping by my blog! I'm going to spend a little time investigating yours now ; )

Love the photo of the Cedar Waxwing! Just perfect. You gotta love the little whistle they have too. We usually see them in flocks during the months of January and February. How they love the crabapple tree just outside my kitchen window!

Glad it was you out there in the dark and not me. Loved the sound of the owl though. Beautiful.

Larry, I came by to see if you were doing the Big January and I'm so glad you are. Count me in! I've already started with 11 species in my yard so far today! I'll do a post soon! BTW, a Gila woodpecker was my first bird of 2009!

As for the owl, I am clueless! Like mary, I only know it's not a great horned owl! I'd love to see a red-throated loon though!

Good luck with your January birding!

Ruth-Yes-the camping was still good-even in the winter.I don't blameyou-I wouldn't go to far in that weather either.-You can start by counting what you can see from your window and car-then add on more when it gets warmer.I'd like to see a Snowy Ow. We have them in Connecticut but I haven't wanted to travel the distance to see one yet.

Sharon-I liked your blog-just happened to pick it up off of someone elses list.Waxwings are great birds-they do make a funny ittle sound.That's how I usually find them.ou are lucky to get them in your yard.-I rarely do.

Kathiebirds-I think the Owl might just be a Barred Owl that got tired of talking too much.Glad you are doing the Big January-Sounds like you're off to a good start!

I recently came accross your blog and have been reading along. I thought I would leave my first comment. I dont know what to

say except that I have enjoyed reading. Nice blog. I will keep visiting this blog very often.

December camping??? You're CRAZY, dude! BTW, sorry for my long, recent absence. Been busy with offline life. My best to you & yours for 2009!

I'm not sure I could handles the minus zero temps alone at night in the woods but I really enjoyed reading your account of it.
thanks

Hi Larry,
I enjoyed this post a lot. You had a good year in 2008 and it sounds like a 2009 is a good year to come.
I would love to try winter camping sometime but it would definitely have to be at least 20 degrees (above zero) for me too!
I'll take your January challenge too and give myself a goal of 50 birds--that will give me a reason to get out of the house when the weather's decent.
BTW, I'm pretty sure the owl in your video is a Barred Owl. Sometimes I hear them make that call when I'm out on the deerstand in the morning before it's light.

I love being in the woods. Nothing like nice, quiet woods.

The lovely crackling fire with the haunting owl calling from the dark.

I've not dropped by in soooo long and I'll be back more frequently, now.

Lana- know it sounds crazy but I liked it.I've been cutting down on my blog reading time too. Birding, working and posting take up so much time that something has to give.I'd like to be able to read every blog each day but that is awfully difficult.-Doing things at your own pace will prevent burnout.

Sarala-Thanks-Happy New Year to you and your family as well.

HI Larry,
a nice bird watching tour again...I love waxing... I saw the bohemian waxing in Finland for the first time (it was in October). Then few days later, there was some at home in Reykjavík that I managed to see. These are my favorites birds, they are cute and their song is beautiful... You did a nice video too.

Chris-Thanks-The Bohemian Waxwing has eluded me so far. I look forward to seeing them one day.