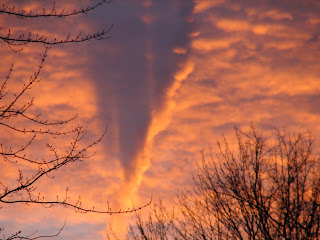 I put in a solid 10 hour day of birding Sunday for a Christmas Count. I was driving across the bridge to meet with the other participants of the count when I saw this mysterious cloud . My common sense told me that there wouldn't be a giant tornado in Connecticut during the month of December . Still, I did a double take when I saw this interesting cloud formation illuminated by the late afternoon sun.
Posted by Larry at 1:24:00 PM

What a fantastic photo! The colors and the cloud formation is incredible.

8 hours for the bird count!! I am doing my first one ever this Saturday. I guess I should pack a lunch!

Actually it was more like 10 hours with the owling included( more on that later).You don't have to put that much time in to a count.-I was subbing for a vacant captain spot so that's why it took so long. Otherwise, half a day works fine usually.

I believe what you observed is what is known as a sundog; light from ice crystals in the upper atmosphere refracted into various shapes. These shapes can be circular, elongated (like yours), intensely bright or diffuse. They occur especially when the sun is low in the sky. There are interesting examples here and here (similar to yours).

Clouds and light can cause some amazing illusions. Earlier this year I observed snowcapped mountains in the distance behind my house!

It does look like a tornado, doesn't it. It does look beautiful and gives the sky a lot of extra personality.

This totally reminds me of when I had that strange, colored line of cloud across the sky here. If you didn't see that post (& the 2, related, short videos there,) I highly recommend it!

That is beautiful and I can imagine it giving you pause on whether or not to return to the storm cellar. I worked in Connecticut one year--1980 or maybe 1979 and there was a terrible tornado in the Windsor Locks area--I can't remember the time of year, but don't think it was December.
Happy birding.

dawn-thanks-more of them to come yet.

steadyjohn-thanks for the information and links.-I will have to read a little bit more about sundogs.

Natural Moments-I much prefer a sky with a little personality.

Beth-That was the one giant Tornado in 1979.It wiped out a whole bunch of planes.

That is a seriously eerie shot you took!

Hi Larry,
Do you think it was a cold air funnel? Sometimes we get them here in Minnesota when certain types of weather systems are coming through. It's a very cool picture though!

What's crazy is that I, too, took a picture of a fake tornado in the last week.

Mine is not 10% as cool as yours though!

Larry, how amnazing is that! And goreous too! Are you sure you weren't having a heavenly visitation?

Rick-It sure caught my attention as I was crossing the bridge!

Ruthiej-I'm not sure what it was but it was pretty cool looking-even more so in real ife than in the photo.

Steve-That's a strage coincidence!what is going on in Connectiut? Are we being swarmed by Tornado look-a-likes?

Kathiebirds-That would be a nice gesture but i'm sure that I'm not high on the priority list for heavenly visitations-but you never know.

dzugman-Thanks- I had nothing to do with the clouds but a least I did think to stop and take a photo.Several people looked at me like I was crazy when they saw me taking a photo of the sky.

That's a weird sky. I think it's sort of like a tornado, but it couldn't touch down because it's not warm enough.

Hi,
Yeh a fantastic photo, but also terrific to see what mother nature can do... We are so small...

Beautiful picture! You should have posted it on Skywatch. Our Christmas bird count is tomorrow and we are being hammered with a severe winter storm. I wonder how it will happen?

Christine-Maybe-A science teacher that I was taling to on a bus gave me an explanation.He basically said that it had elements that would make up a tornado but with out the nergy.-Of course, he didn't even see the photo.

Ruth-I had one scheduled for Saturday-just got word it was cancelled.-I don't really know what the skywatch thing is. Bloggers take photos of the sky and post it? I've seen the skywatch posts but never gave it much thought.

That's a really amazing picture - so glad you captured it.

Bravo on a great photo, Larry! I'll bet you snapped and ran the other way!

Nan-Thanks-Nan-I'm glad I had a camera handy.

Patrice-Happy Holidays to you and your family as well.

Mary-No-but I called my wife to warn her about it.