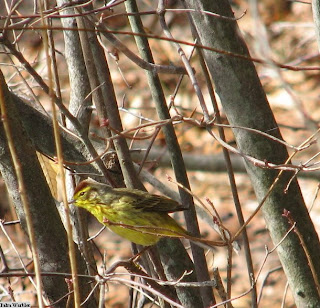 This Saturday, I met up with a friend from the Hartford Audubon to show him a few of my favorite local birding spots. Our first stop was at the Portland Fairgrounds where we found a flock of Wilson's Snipe sitting silently in the wet grass along side the skating pond. Some of the other species we found here included a Red-tailed Hawk, Killdeer, Belted kingfisher, Red-winged Blackbirds, Rough-winged Swallows and Tree Swallows .

We visited several other locations but our best moments came on one of the dirt roads in the Meshomasic Forest. I rarely see birds reported at this location but there are plenty of birds to be seen in this forest, especially during Spring Migration. As we were driving along the dirt roads we spotted an Eastern Phoebe that had made itself at home next to a small stream. After seeing what seems to be an endless supply of robins it was a real treat to see another thrush, the Hermit Thrush, standing silently on the ground amongst a patch of leaves.

Palm Warbler-I saw eight Palm Warblers at the Portland Reservoir on Sunday. They moved as a group in the lower branches making soft trills and chip notes all the while wagging their tails.

Pine Warbler-I hear quite a few of them hiding in the pines but only had a good view of one that perched at the top of a tree for a few seconds. Every year I have to remind myself of the difference between the sound of a Chipping Sparrow and the Pine Warbler. 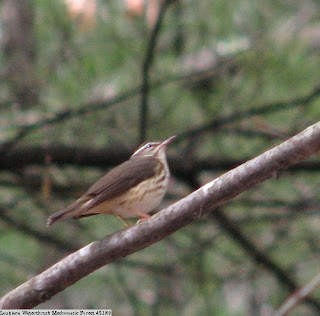 Louisiana Waterthrush -This was the birding highlight of my weekend. I hear the waterthrush singing before I even parked my truck. We we able to locate the area from which the bird was singing then managed to call it out with an Ipod. It landed on a branch just ten feet from us and put on a great singing display. It gave us wonderful views although the lighting was not favorable for taking pictures or video. If you click on the April 2008 post titled Camping And Birding In Kent Connecticut, you will find two videos that feature the Louisiana Waterthrush singing.
click to play
I had much better luck capturing this video of this Palm Warbler. It repeatedly fluffed its feathers out as it preened. Actually the word fluffing probably isn't a good description. It seemed much more dramatic than that. 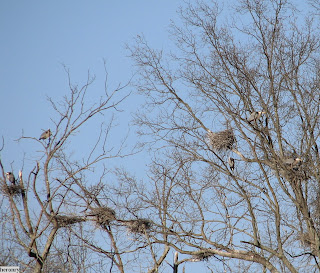 I visited this heronry (undisclosed location) and tried counting the nests. I gave up after tallying 100 nests when I realized that many of them weren't within my view. I decided to start using the word heronry as opposed to heron Rookery after reading this post from the Body Soul and Spirit blog. 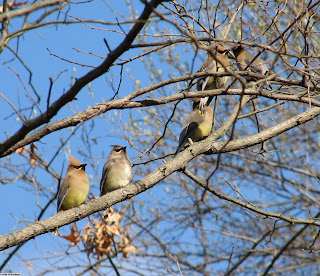 I came across a small flock of Cedar Waxwings in Wangunk Meadows.It seems they were lining up on a branch to have their picture taken. They didn't seem to be very camera shy. Are they proud of the way they look or maybe just a little drunk on berries?
click to play
If you listen closely you can hear the high pitched bzeee notes of the waxwings. They make one last alarm call before flying off in search of another worthy branch upon which to form their magic line.
Have you seen your first warblers of spring yet?
Posted by Larry at 8:00:00 AM

Oh great birdies for you in Ct. I have been seeing those warblers for a bit now..since i am still in the south...northern parulas and yellow throated warblers as well.
we just saw the Blue Grosbeak today...comes every spring here at my sisters feeders...we are now looking forward to the Indigo buntings arrival.
Have fun..I am sending more warblers your way!

Thanks for visiting. I love the Cedar Wax Wings. They love our Pyracantha berries and are so very pretty. I was holding my cat when I played the video and she's looking everywhere for the birds!

Larry please send some of the warblers up my way her in Massachusetts!! I LOVED the video of the Palm Warbler. I have never seen a bird do that with such enthusiasm before.

Loved the Louisiana Waterthrush photo as I am not at all familiar with that bird but will have to keep my eyes open.

BTW: As you saw in my blog I have only seen a Pine Warbler this year. I can't wait to see the rest though. The warblers will be my favorite birds of the season I believe!

...loved the footage of the Palm Warbler preening! He is definitely a fast-action bird. Your heronry shots are great. I visit one also! I go back and forth between calling it a heronry and a rookery. The local birders refer to the place as the rookery, so I use both names. Love the Cedar Waxwings too!!

Larry, Do you have bird calls on an iPod? You called it out with an iPod? I'm flabbergasted. Great photos. Thanks so much.

I've never even seen a Pine Warbler. That's a really beautiful picture of the Louisiana Watethrush. Love your videos. It's super helpful for me to see and listen to a birdsong at the same time.

Only now am I learning what a Warbler is.

Larry, will you go back to the heronry when the birds begin nesting? That would certainly be exciting for me to see. And it sure was cool watching your video of the cedar waxwings. Funny how I haven't seen any waxwings since late Feb/early March.

Orange-crowned warbler--but does it count if I went down to Texas to see it? I will definitely note my first warblers up here, once I see them!

Awesome birds, as usual! No, no warblers in our area yet, but they're not so common here, that I've noticed. Only rarely do I catch sight of a yellow-rumped or pine warbler. There are some prothonotary warblers around the Pearl River swamp, but I don't get over there much. Perhaps I need to make an exception!

Larry, I saw my 1st Palm Warbler today. Thanks for sending them my way! ;o)

Well, I haven't seen my first warbler yet, unless I am mistaking the identity of the chipping sparrow I think I just saw??? Hmm. Love the Cedar Waxwings! Great post!

Dawn-Blue Grosbeak and Yellow-throated Warblers are hard to find in CT.

Mildred-We have a cat that does the same thing if you turn the volume up.

Kallen-You are going to have a great year seeing all thoe new warblers.You need to learn the song of the Louisiana Waterthrush to find it.You usually hear them before seeing the.-You got your first Palm Warbler too-congratulations on that.

Kelly-thanks-Glad you enjoyed the videos etc. Heronry is a little tough to get used to but I'm sticking with it.

Lynne-Thanks-I do better by seeing and hearing too.-I'm okay with listening to bird songs on cd but can't get into it for long periods of time.-I usually just check on specific songs of specific species.

mathew-You spend lots of time near the shore so keep an eye on any trees or bushes you come upon in those areas.-You might just catch a glimpse ofone.

Mary C. -I'll go back if its not too flooded.

Lana-Prothonotary Warbler is one that is chased after in CT.

Patrice-Yes-but it wasn't my ipod.It wrks but the key is not to over do it and probably best not to do it at all during nesting periods.

On Saturday I saw my first warblers, yellow-rumps, some at Lone Elk Park, and others at August A. Busch Conservation Area. My Missouri Dept. of Conservation calendar says warbler migration begins on the 19th, so I'l be heading out to see what I can find.

Thanks for the link, Larry. That is a very big heronry and I think you are wise to keep it a secret of sorts. I am amazed again at the number of birds you see each time you are out. I will look for the same ones in 2-3 weeks.

All I've seen here are Pine Warblers, though I am sure if I went looking, I'd see more...lol. Love hearing the Waxwings!

Spencer-You've got a lot to look forward to this season.

Jayne-You should give it a try!

HI Larry,
A very nice birding day, nice that you saw this warbler.

Larry - very nice. That rookery (heronry?) is particularly cool. We had the same three warblers to start the spring as you did, maybe just a day or two earlier down south here. You should have Ovenbird and Black and White Warbler any day now.... I expect to start seeing Northern Parulas, Common Yellowthroats and others this week...

Have a great spring!
W&L

I have seen orange-crowned warblers, black-throated grays and Lucy's so far. What a treat to see and hear those eastern birds!

What a great birding day! I especially like the pictures/video of the cedar waxwings- they're one of my favorite birds to watch.

I haven't seen any warblers yet this year, but I've very anxious to get out there since Pine/Palm Warblers have already been sighted and there's a lot of buzz over a Townsend's Warbler seen at the reservoir in my old Boston neighborhood.

Looking at my blog archive, April 21st last year I had already seen a yellow-rumped warbler and then on May 5th I saw my first yellow warbler. The Charles River beckons! :)

Warren and Lisa-I'll be looking forward to those new warblers.I didn't get them last weekend but I expect this weekend should be better.

Kathiebirds-Likewise with the Western Birds.Too bad we couldn't trade them like baseball cards.

BirdingGirl-Godd luck with the warblers this year. Are you going to chase the Townsend's?