My Search For Birds Led Me To Dinosaurs! 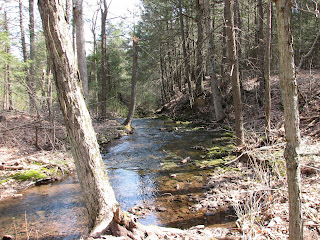 I walked what must have been close to 20 miles through 6 different parks this past weekend looking for new places to go birding but despite my efforts, Yellow-rumped Warbler was the only new species of warbler for this month. The truth is that migrating birds don't care how hard you try to find them. They will go where they want when they want. I may not have seen the variety of warblers that I had hoped for but I did find some interesting things during my travels.

The first photo is from a park in Middletown called Tynan Memorial Park. It passes by some farm fields and enters a wooded area that is lined with some impressive Hemlocks. The main trail connects with the Mattabasset Trail and trail to Mount Higby. I had never been to this park before and only came across it by chance later in the morning. The standout birds here were a singing Ruby-crowned Kinglet and.. 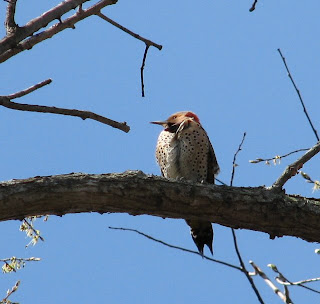 this very vocal Northern Flicker. I came across a couple who were out hiking and we talked about birds for a few minutes. The Northern Flickers have been so loud the last couple of weeks that I've confused them with Pileated Woodpecker calls a couple of times. I also enjoyed watching of a pair of Sharp-shinned Hawks circling above my head before they glided off out of view. 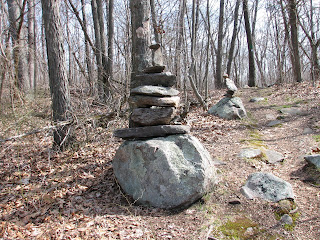 Another park that I visited for the first time was the 300 acre Canfield Meadow Woods Nature Preserve in Essex and Deep River. I used the trail entrance off of 154 in the town of Deep River. There are several old stone walls still intact throughout the preserve. They are the remnants of farms from 100 years ago. The Blue Jays were very active during my hike. They were displaying all kinds of vocal tricks including some nice imitations of a Red-shouldered Hawk call. The only warblers that I encountered here were Pine Warblers but some of the swampy habitat along with some steep rocky hillsides looks like it might be good habitat for other species later in the spring. 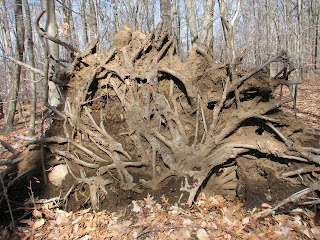 The informative signs along some of the trails reminded me of the pop-up videos that they add to some of the movies on television. I assumed that this tree toppled over because the roots weren't deep enough. 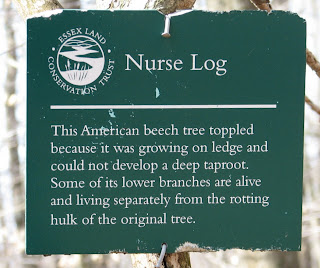 I didn't know that it was a beech tree and that parts of it that were alive. I think that this preserve would be worth a visit during the nesting season. The fact that the trees are not so dense should make for good viewing opportunities and I have a hunch that there could be some interesting nesting species here. 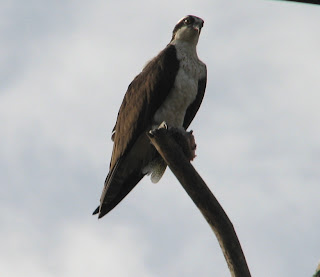 I saw this Osprey perched next to Beseck Lake in Middlefield. It seemed to have a little snack tucked away under its foot.
-
I thought that the names of the roads in the lake area were interesting. There were road names like: Seminole, Seneca, Algonquin, Pawnee, Pequot, Chipeway, Mohican, Iroquois, Cherokee, Kickapoo, Sioux and Chicopee. Do you think there might be a common theme there?
-
I drove along shore of the lake until I located a hiking trail at the end of Mattabeseck Road. It was a fairly steep climb to the top of the hill. The place was alive with the sound of various woodpeckers calling, drumming and pecking away. 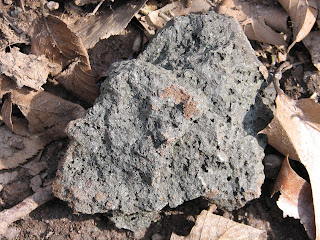 There were lots of these porous rocks lying around. I think they are of the volcanic variety since part of a volcanic ridge runs through the area. I was impressed with all the Hermit Thrushes I found here which totaled five. I didn't see many over the winter so it was surprising to find so many. I found Pine Warblers, Yellow-rumped Warblers and Palm Warblers near the entrance which was just across from the lake. I chased a singing Ruby-crowned Kinglet for 10 minutes but couldn't come up with a worthy photo or video. They sure do have a big song for such a little bird though. 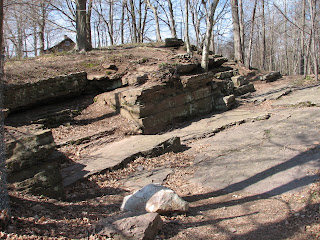 After leaving the Beseck Lake area I took a ride up Powder Hill Road near the old ski resort. I saw a sign that said Powder Hill Dinosaur Park. At first I accidentally drove right past the park and into someones driveway. I was wondering where the park was until I realized that the rock area pictured above is the entire park. 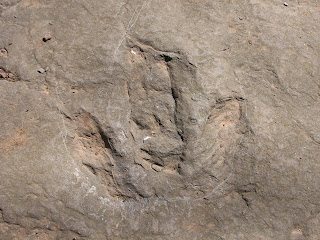 It wasn't until I actually walked over to the brownstone area and looked down that I realized why it was named dinosaur park. I couldn't believe that there were actual dinosaur footprints right out in the open! Most people in Connecticut have heard of Dinosaur Park in Rocky Hill. All the footprints there are carefully protected and preserved. This dinky little park has a worn out sign that is barely legible and the park is hidden away in this old section of town. Who put it there? Where did it come from? How come I've never seen or heard of it before? When I have time I want to go back and see how many footprints are actually out there.
click to play
I also visited Hurd park in East Hampton. I seem to have good luck with Barred Owls. That seems to be the only owl that I find on a consistent basis. I assure you that I was not drinking when I took this video footage. I was in an awkward position on the hillside but did my best to get in record the owl before it flew off into the woods.
-
Besides the owl, I counted 4 Louisiana Waterthrushes here. I noticed that starting from the main entrance there is a gradual decline all the way to the end of the park so I rolled my windows down, turned off my engine and coasted in neutral for almost the entire distance. This was a nice way to cover ground while birding by ear. I hiked down one steep trail that led to the river and spotted a secretive brown bird hiding in the mud banks along a stream. It turned out to be a Winter Wren.
-
I would have to say that my most unexpected surprise of the weekend was the dinosaur park I found in the Baileyville section of Middlefield.
-
What was the most interesting park that you came across unexpectedly?
Posted by Larry at 5:32:00 PM

Great Dino print..I am surpised it isnt protected.
You are giving me so many ideas of places to go when I get back to CT. to visit my family.
I lived there 20 years of my life and haven't been to most of the places you write of.

I like the Owl video even though you were drunk LOL..

I don't know if I would call it the most unusual, but Bluff Point Preserve in Groton was a pleasant surprise. It's much larger than I expected and there is a lot of diverse coastal acreage.

You had a powerpacked weekend! Keep it up and live life to the fullest.

*I Donated to Cornell Ornithology!*
http://www.opticsplanet.net/cornell-lab-of-ornithology.html

Enjoyed your weekend outing culminating with the trip back in time.

Considering the current thought that birds are the current relatives of Dinosaurs, I think the area is quite aptly named. I am surprised that the tracks aren't marked and protested.
I think my most surprising park was in Texas, a cave with a "natural bridge" entrance. The best part was that they had just excavated a pathway and the leaving were in a ruble pile for the taking.

Love the dino print! You have the same amt of warblers as I do. I am getting out there extra early today to search for more. Maybe they arrived recently w/ all of the nice weather we have been having. I also saw a ruby crowned and winter wren this week. I guess we are getting the same influx of birds?

Dawn-I do plan to organie my quick links at some point.It was strange to find prints out in the open like that.

Mathew Housekeeper-I only went to Bluff Point once.-I do need to go back there-good birding spot.

Whitemist-Yes-I was thinking of that connection to-birding mixed with dinosauring.-You must have picked up some nice stuff at those caves.

Kallen-Looks like we are on the same track with the birds.I know that they show the birds coming in on radar but I just read other peoples reports rather than check the radar myself.

That's WAY cool! My husband & I had breakfast out on the deck this past weekend, watching the birds. We talked about how we have dinosaurs in our yard. Funny what time does to terrible lizards!

BTW, my unexpected park was discovering the Flatwoods, about a mile from our house. I was SOOO delighted! (And still am...)