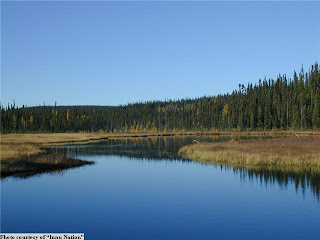 We often about the destruction of habitat and the declining numbers of various species of birds. Here is some good news for both birds and birders. The following is a guest post from David Childs of the Boreal Songbird Initiative. Please direct any comments you might have to David or visit The Boreal Bird Blog. I wanted to help spread the good news to anyone who wasn't aware of it. (photo courtesy of “Innu Nation”)

There have been two wonderful announcements for birds in the past week or so. It started last Sunday when the Premier of Quebec, Jean Charest, announced that the province of Quebec was protecting around 4.5 million acres of Boreal Forest through the creation of 14 new national parks and adding land to an already existing park. The total land protected is more than double the size of Yellowstone National Park (around 2.2 million acres).

This has enormous implications for many of the migratory birds that breed in the Boreal Forest to our North. While many of us get excited in the spring for incoming migrants like the Blackpoll Warbler, it’s easy to forget that their health and numbers largely depend on the status of their breeding grounds in Canada. 300 of the 700 species of bird that occur in the US and Canada breed in the Boreal Forest.

Just one day later, the US added to the momentum. President Barack Obama signed a landmark conservation bill that protected around 2 million acres spread across 9 US states. The land protected included a diverse selection of wilderness, including wetlands, forests, and desert – all of which will be beneficial to a wide variety of North American birds.

Together, about 6.5 million acres were permanently protected over the span of two days and two countries. While the timing was coincidental, this one-two punch of great news made last week a truly great week for North American birds and the birders who adore them.

It is nice to have some one who has an inkling of conservation in the White house now. This is an important step.

That is indeed great news!

That's nice. I think the Boreal Forest is an interesting habitat.

Thank you, Larry. Finally some good news for a change!

Awesome! Canada's always been pretty good about conservation (which I always appreciated,) but it's nice to have a President who's on that side of the fence again, too!

I hope the conservation message continues to be heard in subsequent generations. Great gains have been made in the past 25 years.

...thank goodness! It's nice to know many species will continue to have a place to nest in the spring and summer!