Osprey Mate-feeding Ritual, and A Lifer! 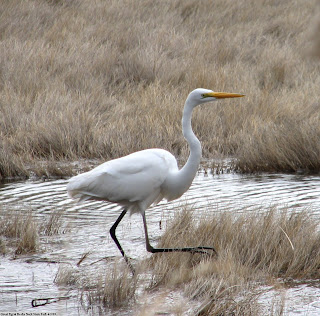 I spent some time at Rocky Neck State Park in East Lyme on Saturday. This park is not as popular as Hammonasset amongst birders because it has less habitat and probably fewer species on an average. There are a couple of nice viewing platforms overlooking the marsh. It turned out to be a great spot to see both Snowy and Great Egrets. I saw at least a dozen of each. I like watching egrets lift their feet out of the water. You can see the blackish legs and feet on the Great Egret in the above photo. I seem to get better results taking photos of white birds on overcast days when my camera is in auto-mode. (Click on the photos for more detail). 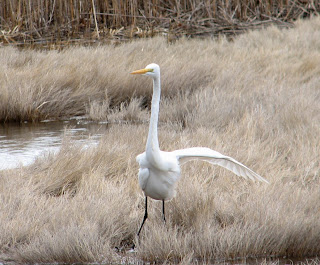 Excuse me- Mr. Great Egret, Can you tell me where I can find a Snowy Egret? Over there? Okay, thanks you. 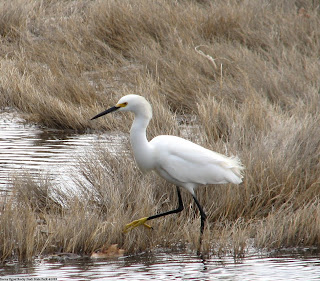 This adult snowy is showing off its yellow feet which really contrast with the black legs. They also acquire lacy plumes on their head neck and back during breeding season. The plume feathers are noticeable on the back of this bird. In the late 1800's the plume feathers of the Snowy Egrets were popular decorations for women's hats with the feathers being were worth twice as much as gold at the time. Snowy Egrets were nearly hunted to extinction before laws were passed to protect them.
click to play
Here's a short video of the Snowy Egret gracefully making its way through the marsh. 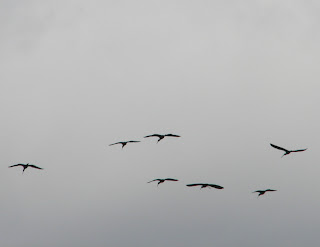 I saw this flock of birds fly overhead. Identifying birds in flight is not one of my strong points but the bills on these birds give them away so I have a pretty good idea of what they are.
-
-Care to venture a guess before clicking the link? 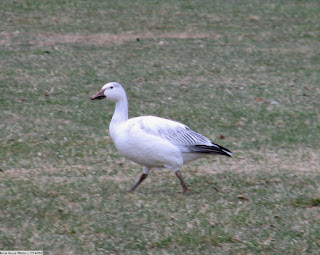 I was driving to work on my way home from work last week when I saw a large white bird mixed in with some Canada Geese. It was grazing on the front lawn of the Bizhub corporation. At first, I thought it might turn out to be a Greater-White-fronted Goose which I had seen at the same location last fall. Upon closer inspection, I decided it was probably a Snow Goose based on its size, color, and black feathers on its wing tips. The problem was , that I had never seen one before and didn't have my binoculars with me. I came back two days later with binoculars and a camera. Luckily, the goose was still there. I was able to use the gigantic Bizhub sign as a bird hide to help me capture a photo and now it's officially a lifer.
click to play
This video was taken at the Four Mile River State Boat Launch in Old Lyme. There are a lot more platforms at Great Island Boat Launch but this one gives you the best view. I stayed in my vehicle so as not to disturb them.
-
I noticed on more than one occasion Saturday that one Osprey would bring a fish to the other that was waiting on the platform. After the one Osprey would deliver a fish, the other would take it to a different location to eat it. It just so happens that this is exactly the behavior that is described on New York Wild website which states the following:
-
- Soon after the female arrives, the male begins to bring food to her. The female may take the food to a perch to eat, returning after her meal with material to line the nest.
-
I was glad that I took the time to read that because there seemed to be a pattern to what I observed the Osprey doing in terms of catching fish and collecting nesting material but I wasn't sure what the pattern was. Little discoveries like that make bird watching more interesting-wouldn't you agree?
Posted by Larry at 11:09:00 AM

Nice pictures! I also like rocky neck, maybe cause it is not so popular and have had a few occasions to visit there.

Great photos of the Egret and FANTASTIC video of the Osprey. They were all great finds and the video is so interesting to watch.

Great photographs. It must have been wonderful to see this in person. Very interesting.

Wow- these pictures are great! I enjoyed the video of the snowy egret too. Pictures don't always do a bird justice. Getting to see their movements is really interesting and helpful.

How exciting to have photographed this! Thanks for sharing with us!

I'd rather see the plumes on the bird instead of in a hat!

Hi LArry,
Well done for the osprey mating behavior, it has probably been marvelous to see that!!!

Larry, thanks for posting about the osprey's mating behavior. That is certainly something we all want to keep in mind this time of year. Now, to get out and find a pair to observe. ;)

You are a lucky man, Larry. I loved the yellow feet and black legs. Oh, just wonderful. And the video of the 'walking on water' took my breath away.

Great post Larry! I especially like the videos this time. Tell me, did you get to see what the egret does when the water gets too deep to walk in? Does it turn around or fly away?

Whitemist-It is a nice shore spot. I think I'll make another stopthere to see if I have any luck with shorebirds.

BirdingGirl-Video is a nice alternative since I have an awful lot of failures in my photography attempts and the videos tell a nice story.

Mary C.-Thanks-I'm sure you can turn up a pair somewhere in your travels.

Nan-Thanks Nan-I'm glad you enjoyed it.I think the way they walk and show their feet off is pretty neat.

Ruthiej-I'll have to think about that one. I do remeber seeing the Great Egret with water all the way up its legs.

Larry,
I don't know where to begin..all that I read and watched was really interesting and I just loved those first shots of that great egret against all that tall brownish grass..made your whites on the bird really pop!
Your video of the osprey was great..and reminded me of part of the book I am now reading about the famous red-tails who live in central park ny..it is a great book and a true story..red-tails in love by marie winn.
You sure seem to have some great spots to bird..lucky guy!!
Thanks for stopping by my blog today..appreciated your comments!
:)

Great post..Loved the video..I always like the videos you put in..
and the observation about the Osprey was very interesting..I didnt realize that happened.
Congrats on your lifer!

Larry, what a treasure trove this day was! Congrats on the lifer. Nice videos. And what interesting behavior you observed! Those osprey are magnificent!

I always learn so much from your posts as you go on the most productive outings. Wonderful pictures to go with the post.

SO much good info here--thanks! I agree that overcast days are best for photographing large, white birds. They just reflect SO much of that light they tend to come out with a blue glow under bright sunlight.
Cool on the snowy egret & the ospreys, too! So awesome!

Tina-Thank you-that's a good point about the grass background.I think that helped the birds show up well.I also read that book and enjoyed it. I didn't like the title but I liked the book.

Lana-Exactly-I've had times when it is a nice sunny morning only to find out that it was too much light for photos of white birds.Of course if I knew what I was doing then I would make adjustments but I'm still hooked on the auto setting.I don't want to be a photographer-just let the camera do the work.