The Wicked Twitch Of The West 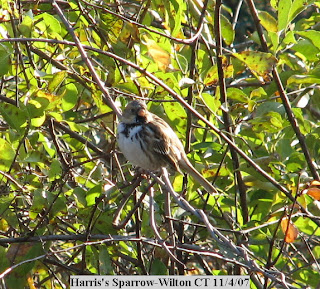 The above photo is that of a Harris's Sparrow. It is the largest sparrow in North America and it is rare to see them in CT. This bird was reported last night on the CT Rare Bird Report (B-mail). I decided this was a bird worth "twitching"(traveling to search for). A common reason that birders seek out rare birds is to add them to one of their lists. This is not a primary motivating factor for me. I just decided that I wanted to see this species of sparrow which I had never seen before. The area where it was reported, Allen's Meadow (Wilton, CT), has been on my radar as a place to go birding for a while now. It became a popular birding spot after a Brit birder named Luke started reporting rare and uncommon birds from this location.

What really made this a wicked twitch was the traffic! It seems like the majority of the rare birds that are reported in CT are located somewhere near the shore, but particularly in the western part of the state. It would appear that there are more rare birds in western CT along with a lot of active birders. The ride to Allen's Meadows was supposed to be about an hour's drive according to Mapquest. I left at 6am: "The early twitcher catches the bird", right? It actually took me over two hours to get there. The traffic was brutal! I asked a worker at one of the service stations if it was like this all the time and he said that this was just an average day of traffic. I had to pry my hands off of the steering wheel by the time I arrived at my destination. I can't imagine how someone could sit in that kind of traffic every day. 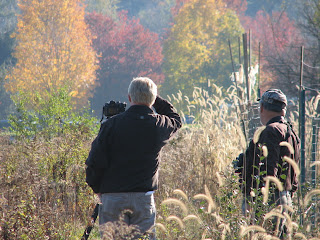 When I first arrived at the meadows there was already two birders searching the area. After about half an hour of searching, the Harris's Sparrow was finally located. It was perched near the top of a bush next to a community garden. I made a few notes and rudimentary sketches of the sparrow before attempting to photograph it. I couldn't get too close because I didn't want to take a chance of spoiling someone else's opportunity by scaring off the bird. I enjoyed conversing with the other birders who came along, a few of whom I had met before. It's also fun to help others to locate the reported bird. 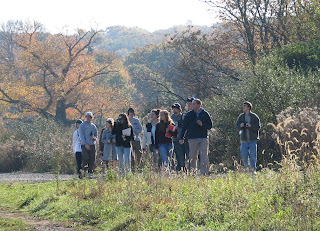 Next came a class of budding birders on a mission to find the prized sparrow. Up until the time of my departure they hadn't found it. I saw some other interesting birds during my visit here including: two Eastern Meadowlarks, one Fox Sparrow, two Brown Creepers. These are fairly difficult birds to find in my home town. Allen's Meadows isn't much to look at. It's just a couple of athletic fields with some weedy areas and a patch of woods toward the back- but it has produced several rarities over the past few years.
On the way back home, I made a stop in East Haven, where a Common Ground Dove has been reported for the last couple of weeks. The bird has been seen near a brushy edge of an empty industrial parking lot. Armed with a folding chair, binoculars, and a camera, etc., it kind of felt like I was on a police stake-out. I carefully searched as many as fifty Mourning Doves at a time. Unfortunately, I never did see the Common Ground Dove. If I found what I was looking for every time, it would take some of the fun out of it. White-crowned Sparrows and a Sharp-shinned Hawk were there. It's amazing how birds see a hawk coming and scatter well before you even notice it.
While I was there, a well known birder named Dori stopped by to check on the status of the dove. She told me about how this area was identified as a productive birding area during a Christmas Count from a previous year. She keeps a continual supply of bird seed on the ground near a brushy border in this industrial lot. In this way, birds that would normally be hidden deep in the cover are drawn out for easy viewing. This has led to the sighting of some rare birds here.
Was seeing a Harris's Sparrow for the first time worth two hours of grueling traffic? To me, it was-absolutely. Not only was it a lifer, but it was an impressive looking bird to see. Was sitting in an industrial parking lot looking for a Common Ground Dove that never showed up worth it? Not really, but I have no regrets about that either. In a way, it's a gamble. Instead of gambling with money, you're gambling with your time. The question is: How much time are you willing to put in trying to find that special bird before you decide to fold your hand and call it quits? The answer is entirely up to you.
Posted by Larry at 3:29:00 PM

I've had a single Harris' sparrow stop over in my yard for the last few springs. Isn't it a handsome bird?

Congrats on the sighting. I heard about this bird on our Jersey listserv. I had a shadowy, brief view of one in NJ last year, but not well enough to "count" for me.

Wow, the Harris Sparrow would be a great find for sure! Bravo!

Back in Michigan, I waited all year for a Harris' Sparrow to turn up close to Ann Arbor and finding a Harris was the main drive behind my winter walks through the Arb (well, Bachman's Sparrow would have been a nice reward as well, just mentioning it).

Congrats on seeing such a great bird!

Surely a bird worth twitching for! I've been on the lookout for one myself.
Vern

That's one cool sparrow Larry! I've never driven anywhere to see a bird but then again, I'm still trying to get out of my back yard.

Thank you for visiting, Larry--now I have your blog to read and enjoy. I will add a link to it on my blog lists, though I'm not as organized as you are with yours. Maybe one of these days.
I'm not a birder as such--we feed birds yearround, create habitat for them and watch them, and keep the furchildren except for the three old cats indoors, and I am slowly learning more...your blog will be a priceless info source. !

Lynne-I remember that.You are fortunate that Minnesota is within the Harris's migration range.

Patrick-Don't you hate when that happens? That's somethin that will get you talking to yourself.-I'm sure you'll see one eventually.

Monarch-Have they ever turned up in your nets?

jochen-Thanks-you've got to have a few that escape you so that it will keep you challenge.

PA birder-hopefully they will head further south to your area.

Jayne-Maybe a rare bird will show up at one of your neighbors to get you started!

jodi-thanks-I've added your blog to my list as well. Some of the people who visit my blog are pretty good flower gardneners.

I would have loved to have seen that Harris's Sparrow! What a bird!

If I had time to spare (it's minimal) I'd do the same thing. I'd buy some camouflage wear and sit and wait. Enjoy meeting others, too.

Mary-I had time to spare because I've been on vacation. Believe me-blogging takes up a lot more time than an occasional twitch.

Wow, Larry, I checked my field guide and that Harris' sparrow really was way out of its normal area! I'm glad you got to see it. I occasionally see a few in my yard during spring migration. They are a very handsome little sparrow.

Nice lifer, Larry! I try to limit my twitches to a half-hour drive (which means I don't go after many birds). But I love sparrows, and would probably drive a couple hours to see a Harris's -- just to say I'd done it, you know?

Lucky! I've never seen this sparrow. You got a great picture and it was very considerate of you to be mindful of other birders.

I've had birders practically shove me out of the way for a photo of a Kirtland's.