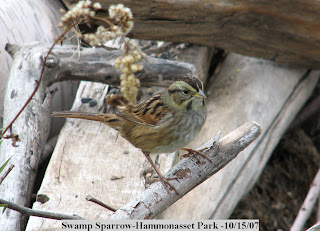 Here are a few photos that I took recently and didn't really know what to do with them. The first photo is of a Swamp Sparrow. I noticed that a bit of yellow is showing at the base of the bill as described in Sibley's Guide.It seems to have a yellowish tinge about the face as well. I used the method of pulling up in my truck and waiting for the bird to land on the brush pile to get this photo. If only an Ivory-billed Woodpecker would land on the pile I'd be all set. First someone has to make up their mind as to whether they still exist or not. Do you think the Ivory-billed Woodpecker still exists? 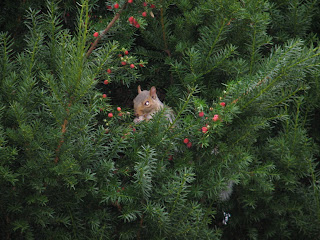 This squirrel is a very mischievous fellow. He will often follow me over to the metal cans where I keep my birdseed and jump right in within minutes after I take the cover off. I should probably have a name for him. What should we call him? 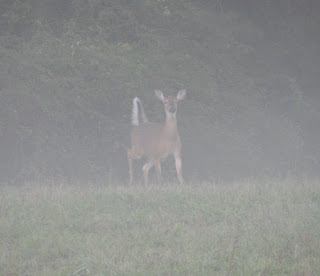 A deer in the mist. Look at the tail on this one. It looks like a Christmas Tree or maybe a bottle brush that Fuller Brush might sell. It would sure come in handy for cleaning my tube feeders. Do you remember the Fuller Brush Company? 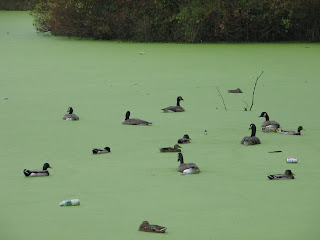 How would you like to go swimming in this pond? All you need is a couple of hams thrown in and you'd have enough pea soup to feed a whole city. 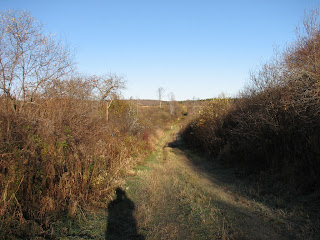 This was taken at Eugene D. Moran Wildlife area in Massachusetts. It was quite a long drive getting up there. The area was beautiful! It had a clear stream, fruit trees, stands of conifers, and big open fields. Unfortunately, the place was loaded with hunters before I had a chance to do much birding. I talked to one of the hunters who gave me some pointers on how to avoid being shot. I decided to move on after seeing a Dick Cheney look-a-like. I did have a nice view of a Red-shouldered Hawk gliding around. They flap their wings pretty quick in between gliding. I also spooked up a Ruffed Grouse at Notch view preserve which was right down the road.
There was one moment when I attracted the attention of some Black-capped Chickadees after pishing. I was hoping to find Boreal Chickadees which had been reported in the area. Instead I had eight ornery chickadees flying right towards my face! I've been trying to get a look at a Boreal Chickadees for a couple of years. Have you ever seen a Boreal Chickadee?
Posted by Larry at 7:23:00 PM

No Boreal Chickadees for me. Why I haven't even seen a Ruffed Grouse for many a year and they are the state bird of PA! Here, the Chickadee question is if it is Carolina, Black-capped, or a hyrbrid of the two?
Vern

Hi Larry,
I believe there's an Ivory Billed Woodpecker (hopefully 2!) out there somewhere.

I know what I call those squirrels, but it wouldn't be very nice to say it here!

I don't know how those deer can make their tails look so big--it must be something like the cat does when she makes her tail big. When the deer are just walking around, their tails are not big at all.

I vaguely remember the Fuller Brush man....my mom had a vegetable brush and that's where we used to get our hairbrushes also.

And it's too bad people have to throw their cans and bottles out into that pond, isn't it? Even if the pond looks like pea soup, that doesn't mean it's a garbage dump.

In closing, I have never seen a Boreal Chickadee either. Maybe someday when I'm visiting northern Minnesota....

That swamp sparrow has a very unusual face. I wonder if it stuck its head in something that gave off a yellow dye - like pollen or spores.

Regarding the ivory-billed woodpecker, I think that if any existed that the search teams would have gotten better evidence by now. At least that goes for the Arkansas site and the Florida panhandle site. I suppose there could be ivory-bills extant somewhere else, but sites with appropriate habitat are relatively few.

I have not seen a Borel Chickadee in these parts - nor black-capped!

You made me laugh out loud when you commented on that pea soup pond! It's OK - just not very good looking. The algae is good food.

My best treat on this post is the photo of that beautiful Swamp Sparrow! When I enlargd that photo, I gasped. A delight.

Our local chapter of the Ontario Field Naturalists had a speaker last week who spoke on the topic, "Does the ivory-billed woodpecker still exist?" I didn't go, so I don't have answers :-) The sparrow picture is really excellent.

Hi Larry - that's a beautiful photo of the swamp sparrow. As for an Ivory-billed, I would repeat what John wrote. I love that pic of the squirrel. As for a name...how about Mischief? I think Ruthie may have something there about the deer's tail - at least that's what it looks like in the picture - she was startled, and like a cat wanted to look larger in order to "scare off" her intruder. A pea soup pond - eww! I guess it doesn't bother the mallards and Canada geese, but too bad about the trash floating around. Yes, I remember the Fuller Brush Company. My mom used to buy from them, and then I remember buying from Fuller Brush back in the 1970s, maybe even the early 80s. But I haven't seen one since. I would love to see a Boreal Chickadee some time in my lifetime. That would be a lifer. Right now, I'll be content to enjoy my chestnut-backed chickadees at my feeders.

I would be interested to see what happens to the Boreal Chickadee with climate change! Maybe another extinction!! Regarding the Ivorybilled, its more about if you believe that video or not! Obviously I didn't answer that question as you can see!

Pa-birder-Trying to figure out a hybrid must really be a challenge.

ruthie j-You have more faith than I when it comes to the IBWP.I need to see a photo.Your tail theory makes sense.-You're right-people shouldn't toss in trash even if the pond is green.

Mary-Yes the ducks do seem to be eating up the algae.-Glad you like the Sparrow pick.

John-I agree with you on the IBWP.Maybe the sparrow does have something on its face.I've never noticed such a yellow tinge on as Swamp Sparrow's face before.-Maybe he was jealous of all the Savannahs that were around.

Mary C-Mischief it is then!-I miss some of those old fashioned companies like Fuller Brush or dairies that deliver milk to your doorstep.

Monarch-I've noticed that giving your opinion on IBWP can be like talking about politics or religion.-Some people get very defensive about it, so I don't blame you for not giving an opinion.-I hope Boreal Chickadees don't beccome extinct but I'm sure we will have to face the possible extinction of some species.

Larry, you are so funny! Pea soup indeed...blech. :c) Nope, have never seen a Boreal Chickadee down South...and unless one gets really misdirected by On-Star, I doubt I ever will.

Yes Fuller Brush is still in business. This is our 101st year and we are still going strong. If you would like a catalog just drop me a line or fill out my online forum at
http://www.myfullerbrush.com/catalog.asp

Emails are never sold or given out to anyone.

Aw, dang--I was gonna vote for naming him Jumpy. He's so cute!

Never seen a boreal chickadee; aren't they out west?

I know Fuller Brush man from things like Bugs Bunny, etc., not from experience.

And I hope the ivory-billed is still alive. But I agree with the others that you'd think someone would've gotten a good look at one by now....

I like it when you're funny, Larry! Thanks for the smiles!

I love the pea soup picture and yes - I've seen boreal chickadees, but had to go all the way to the Adirondacks for them.

Fuller brush Man-Normally I woldn't want a sales pitch on a bird blog, but I guess I asked for that one.-Glad FB is still in business!

dzugman-they'rein the Boreal Zone-North and Northwest but they some time are irruptive heading south.

Laura-Good for you-I've tried a couple of times but no luck yet.I wasn't joking though-I was being serious

I love the picture of you casting a long shadow. I took a similar one recently.

As for that rascally squirrel . . . my name for him would change depending on my mood :0)

When you're bored this winter - rent "Over The Hedge" Seriously. I defy you not to crack up when the squirrel "Hammy" is on caffeine.