Zeroing In On Particular Species 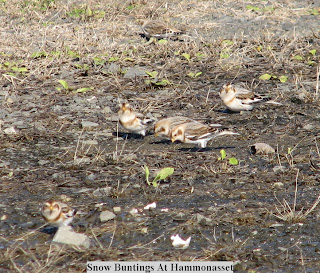 Part of what helps to keep birding interesting for me is to approach it in different ways. Most recently, I've decided to zero in on trying to find certain species. I've been looking for species that I haven't previously seen or ones that I haven't seen much of during the year.

The Casino Effect-Rare birds are reported by birders in Connecticut almost every day. I believe you would have a reasonable chance of relocating some of them if you went back to the same location within a short period of time. There are, however, certain species of birds that don't tend to stay in one place for very long. When one of these nomadic species are reported, it can be very tempting to try to search for them where they were originally found even though the chances are that they probably will be long gone by the time you get there. There may be only one or two reports of a certain species in the whole state but suddenly droves of other birders will have high hopes of finding that same species. It reminds me of people who play slot machines at the casino. The place is filled with people losing money. No one pays much attention to the people who are losing but if one machine suddenly pays off it gets everyone's attention. The nice thing about searching for elusive birds is that you never really lose. You still have a great time trying even if you don't always succeed.

Hammonasset-The day after Thanksgiving, I spent a few hours at Hammonasset. During my visit I was fortunate enough to see two new species (lifers)! These would be the Lapland Longspur and the Northern Gannet.

Let me give you a bit of detail about how I came about finding these birds. I ran into Adrian, Beth, and Fran, all fellow members of The Hartford Audubon . We were all checking through flocks of House Finches hoping to find a Redpoll mixed in. They mentioned seeing a Purple Finch and I happened to come across a couple of Fox Sparrows. We scanned through a flock of Horned Lark at the parking lot near the nature center hoping to find a longspur but there was none. Only a single Snow Bunting was mixed in with the flock. I was particularly interested in seeing a longspur as I had never seen one. They gave me some information about other locations in the park that they have been seen before. I found another flock of Horned Larks at the end of the West Beach Parking Lot. I searched through them one by one and Shazaam! There it was-the Lapland Longspur. It's not that rare of a bird to see but it was for me. It was not in breeding plumage and really blended in with the larks. What made it even more fun for me was that I found it myself. Adrian and Beth are always finding good birds. I finally beat them to the punch on this one and was able to show them where it was. They told me about some Northern Gannets which had been seen at Meig's Point, which is also located within the park. I went to look for them and sure enough they were still there. I watched them as they took turns diving into the water. There was also a swallow flying around the park. It was reported to be a Cave Swallow.

On my way back home, I noticed two Canada Geese with yellow neck collars swimming in a small pond. I checked the numbers and realized they were the same two that I had reported seeing last winter. 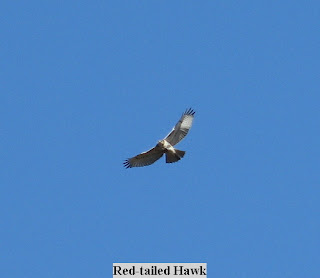 On Saturday, I visited East Granby Farms for a few hours. This is also the sight of one of the Hawk Watch locations in CT. There is a fellow named Joe who counts hawks there from about September until December every year. He's been helpful in giving me tips about identifying hawks in flight. 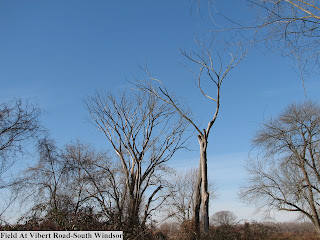 On Sunday, I briefly stopped at Glastonbury Meadows before heading over to the famous Station 43 area in South Windsor. This is a large area of farm fields that can be accessed from several locations by roads which divide them. The above photo is the area where I had a brief look at a Northern Shrike. The Shrike, which had been perched on one of those trees, dove into some brush looking for another bird to snack on. I spent a couple of hours birding with a veteran birder named Paul D. He keeps a list of everything he sees. He's been doing this for many years. We were surprised to find ten Ruddy Ducks in the CT River which is a bit unusual. Another birder named Rick told us about a male Baltimore Oriole he had seen. It's pretty late in the year to be seeing an Oriole! Paul and I had no luck in finding it though. We did see several Fox Sparrows and also a very sneaky Brown Creeper. 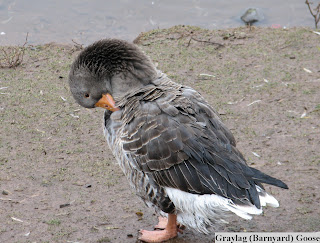 I had the day off Monday but it turned out to be a rainy day. I visited Lyman's Orchard in Middlefield CT, which has a large farm type store called The Apple Barrel. They have a pond which is loaded with ducks and geese. The majority are Canada Geese and Mallards. I was hoping to find a Greater White-fronted Goose, which had been reported here. I did see the similar looking Graylag seen in the above photo. I'm wondering if I'll know GWFG when I see one. I made an attempt to record a video of several hundred ducks and geese, which were making a tremendous racket. I kept pressing the shutter button halfway down to focus like I do when taking pictures. When I played it back, I discovered that pushing the shutter button halfway pauses the video. Hopefully, I'll have better success next time.
-
It won't be long before the Christmas Bird Counts start.
Will you be participating in a Christmas Bird Count?
Posted by Larry at 6:03:00 PM

In the wintertime, I tend to go after a particular bird(s); in the spring/summer, there are so many birds that I just see what I see. I'm still looking for those "dirty birds" of your previous post, the horned lark and snow buntings, longspurs, all of which would be lifers for me. So far, nothing, but I'm hoping we'll get a good snow soon and I'll find some.

I haven't decided about the CBC; depends on the family's travel schedule.

Congrats on the lifers! I have a 2007 list of 207 birds, which were for the most part mostly found within a 30 mile radius of my home, though I did travel a little further to get my lifer Loggerhead Shirke and lifer Short-eared Owl. Though I usually don't travel too far I like you do take the opportunity to visit specific habitat at specific times of the year to find particular birds. Sometimes I get them sometimes I don't. As far as CBC's go I'm doing at least 3 and maybe a 4th.
Vern

dguzman-Arepeople reporting seeing those birds in your area? Christmas count can be great fun!

pabirder-I'm similar with my birding in that I don't often travel outside of a 30 mile range-usually not beyond 10 miles.I will have to start a year list next year. I counted 100 in January but stopped after that so I have no clue as to how many I've seen this year but I doubt it would reach 207.-Nice list Vern!Loggerhead Shrike!I don't think those have been reporte in CT for years.

Haven't done CBC before but since I'm such a "counter", I'm considering it.

wonderful list of birds that you have here! Yes, I am a CBC counter! We always do it the first week we are allowed.

I always look forward to the CBCs! They are fun (and good excersise before more holiday fun!)

Lots of cool birds for you Larry! I have yet to see horned larks or snow buntings here this winter, but they're always fun to watch.

No CBC for me as it's our busy time at work and my Saturdays in December are already spoken for. I keep trying to convince the people in charge of the local CBC to move their location circle a couple miles farther south so I can count in my backyard after work, but they apparently aren't going to change just for me (sigh)

Christmas Bird Count sounds fun and I considered it down here BUT I never have time to count. Maybe another year.