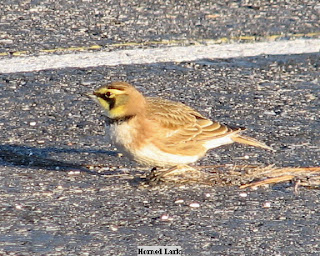 The first 78 species on my January list were compiled independently. In order to exceed 90, I would need to visit the western part of the state looking for species that I am less familiar with. On Saturday, I met up with a group of birders who had one common goal; to add as many species to their January list as they could. I arrived at a commuter parking lot in Chester, CT at 7:30am so that we could carpool for the trip. We didn't return to that parking lot until 6pm! 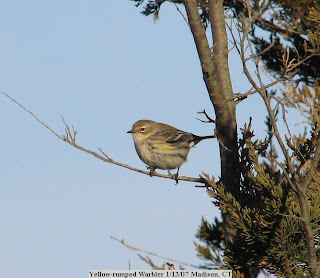 I like the idea of carpooling if you're going to be putting on a lot of miles for a birding excursion. It's cheaper, more efficient, and seems like the environmentally conscious thing to do. Adrian and Beth led the trip, which focused on the Connecticut shoreline. We made numerous stops between Old Saybrook and Stratford.

Here are some of the highlights of the trip: 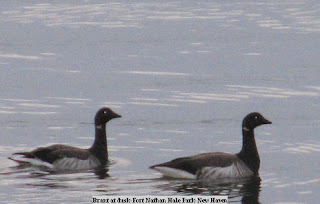 I received a lot of help with finding and identifying the birds that I saw on Saturday, but I was careful to make sure that I could recognize the identifying field marks on each species that I added to the list. This final big day of birding was very enjoyable as well as a great learning experience. I was also able to surpass my goal of seeing 90 species in the month of January!

So there it is.....the final list. I actually saw 3 less species than last year, but I was able to find 80 species without help versus finding only 68 on my own last year. A few species that I was surprised not to have seen during January included: Yellow-bellied Sapsucker, Hairy Woodpecker, Pileated Woodpecker-(update-just seen today-1/30/08), and Brown-headed Cowbird. Next year I would like to see if I can find ninety species on my own. I had fun this month but I'm looking forward to taking a different approach to the type of birding I do in February. I hope you all enjoyed your January birding! -(This post was edited 1/30/08 to add Pileated Woodpecker).

Larry,
You are now officially a Lister! Sorry bud nothing you can do to convicnce me differetnly! I can see it now, a list while driving to work, a list for birds seen while going to the mail box, a list for those birds seen by yourself, with one other birder, with 2 or more others! As you see the list just goes on and on. Seriously though, glad you had fun with your January listing efforts. Enjoy your Feburary biriding list or not, and all through the year,
Vern

PaBirder-I'm officially a Jamuary lister but there are other aspects of birding that I enjoy much more.-I'm not planning any other lists for this year-and thanks-

Way to go Larry! You have some very nice birds on your January list! Rough-winged Swallows!.....It'll be a few more months before I'll even be thinking about swallows up my way!

Great list! I am most surprised by the rough-winged swallows. They really shouldn't be here at this time of year.

Very impressive! I'm surprised by the palm warbler as well. I haven't seen any warblers at all in PA this winter, which is only serving to sharpen my impatience for the spring migration.

Hey Larry, Congratulations! That's an amazing number of birds and I'm glad you had a nice day to go out searching with other birders. I think it's great you've seen so much improvement in your bird ID skills and now have more confidence in your own ability to ID them on your own. 2008 has started off as a good birding year for you.

Wonderful! I was delighted to learn (through my eBird reports,) that I've seen almost 1000 birds in my yard this month. Woo hoo!

Tom - The Rough-winged Swallows were an added bonus. They had been reported on the rare bird report in previous weeks.

John - I guess I should have told those Swallows that they don't belong here! I don't think they know.

Dguzman - Actually, it was a Pine Warbler. Hammonasset is known to have unusual species show up in the Winter months.

Ruthiej - Thanks...it's always easier to identify a bird after you've seen it a few times.

Ok. I've been keeping a list and it will most definitely pale in comparison to yours! Bravo, Larry! I'm very impressed. I hope you have many lifers in 2008.

Way to go Larry! I am beyond impressed. I am proud of you.

Wow, wow, wow Larry! What a list you have there! Congratulations!

You efforts have been well rewarded. What an impressive list. My January list stayed at 30 birds and the weather here has been too frightful for bird-watching. Spring is coming...

How cool is it to see a lifer in January? Listing can be amazingly fun AND it I have found that you go birding more when you have a quest such as a big month! Good birding to you and may you see even more birds in February!

Well Larry, I was wondering how you would do. Congratulations! I made it to 86 species, though if I was better at identifying sparrows I may have gone higher. I am researching one last sparrow I saw last night but I haven't counted it yet since I am unsure. My final day of birding will be posted soon. I just finished writing Tuesday's post which has a big surprise if you want to see it! Congrats on the pileated. I love them!

j. Karl-That would be really something to have a Pileated Family living in your yard-I'd love that.

Mary-It doesn't matter how many species you see-the fun is all in the effort.

birdfreak-It is nice to know that birding can be good even in the month of January.

Kathiesbirds-I know that you gave it a great effort and saw a lot of great birds.-I'm glad you participated!

Larry, what a wonderful day and love your photos as always! The horned lark has to be my favorite for sure!

Larry, my final total is now posted and though I tried hard, you still beat me. I made it to 89though. I'll be ready when 2009 arrives to give you a run for your money!