Weekend Three In The January Quest For Birds One of the fun things about keeping a January list is that species such as the Northern Mockingbird, pictured above, take on new importance. Every species you find makes your list grow by one. I've become better at learning to identify species that I don't normally see and have also learned more about where I can find them. Probably what I enjoy most about the experience are the unexpected surprises that happen along the way.

1/19/08-Saturday Morning In Old Saybrook: I visited the Old Saybrook area hoping to find Long-tailed Ducks, grebes and Monk Parakeets. I didn't find any of these. Maybe I wasn't looking in the right places or they just knew I was coming!

My first stop in Old Saybrook was at North Cove. I was immediately encouraged when I looked across the water to see a nice little group of ducks just waiting to be seen. The only problem was that they were decoys-can I count those? As I looked to the right of the decoys, I did see what looked to be ducks of the non-plastic variety. They were very small though, so I decided to set up my scope. As I've said before the scope is tough to use mainly because the tripod is too flimsy and I have to hunch over to use it. I remedied the height problem by setting up a folding chair so that I was more comfortable. Just as I was getting ready to focus in on one of the ducks....BANG!....a hunters gun went off and so did the ducks. I did finally locate them. They were Hooded Mergansers and Buffleheads, two species that I look forward to seeing each winter.

I tried a few other spots in the area but it wasn't until I checked out the Saybrook Jetty that I came across some new species. There was one particular duck that looked familiar to me as it repeatedly made short dives in to the water. "Ruddy Duck" I thought. The only problem was that I remember Ruddy Ducks having their tails stick up. I checked to see if there were any other possibilities but that's what it was. There were also at least a dozen more Buffleheads and Hooded Mergansers, but then I saw a shaggy-crested Red-breasted Merganser. I spotted a Common Loon while in the Saybrook area. 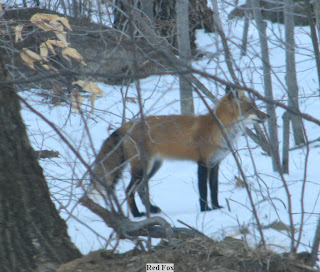 1/20/08- Meshomasic State Forest: On Sunday morning I visited Meshomasic Forest, right here in my hometown of Portland. As I was driving down one of the dirt roads, I was surprised by a Red Fox crossing in front of my truck. As I hurried to get my camera , it stared right at me! I was only able to catch a photo through my windshield before the fox was gone. I think they are such elegant looking animals. This is only the second time I've seen a fox in Portland, although I've had numerous Eastern Coyote sightings.

As I was approaching the reservoir entrance area, I saw that an old tree was burning. I decided to inform the fire department, but I assured them that it didn't appear to be an immediate threat. Then I had to hurry out of the woods or one of their trucks might force me off the narrow dirt roads. No luck with birds here.
-
1/20/08- Wangunk Meadows: It was wicked cold and windy when I reached the meadows. I don't mind the cold but have never cared much for wind. I walked along the river until I reached South Glastonbury. Along the way, I had a brief but close up-view of a Merlin as it zoomed right past me. I could see its pointed wings and dark colored body. I had seen the same bird two weeks earlier. Still, I wish that I could get a better look at it while it was perched.
-
Further into the wooded section I came across 6 Eastern Bluebirds. I seem to find them in wooded areas, more often in the winter than I do in the spring. I was hoping I would see a Wood Thrush, Hairy Woodpecker, or a Pileated Woodpecker; strike one-strike two-strike three! On my way out I heard a very odd sound, like a cross between a loon and a cat meowing. I have no idea what it was. So it was an interesting morning for me and I felt pretty good after walking a few miles.
-
During last week, I saw some Wild Turkeys in Bloomfield and a Purple Finch at the bird feeder at my workplace. Common Grackle was another recent addition. Since my last update, I added nine new species but each one is getting harder to come by. That brings my total up to 75 for this month, with one more weekend of birding to go!
Posted by Larry at 8:57:00 PM

What a week Larry! Love that photo of the red fox... so beautiful.

Your list is impressive Larry. My January list is not going to increase I fear. It has been so cold and windy. I would be happy to see a fox though.

Oh, well, I have a count in the mid-thirties but the month isn't over yet.

I commend you for braving wind. The cold is OK but the wind makes me retreat.

Larry,
Sounds like you're pushing hard for a big January list! I have a friend who keeps monthly lists, pushing for 100 each month. Do you think you will be go for as many speicies as possible each month? With e-bird it is real easy to keep track of. I really just pay attention to the year list. I like the story about the decoy. That has happened to me more than once. And no, sorry to say I don't believe you can count them unless you have a "Fake Bird" list going as well.
Vern

As to the tree on fire; I think you could have handled it yourself, Larry, without involving Portland's bravest. Do I have to spell it out? Or, you could have thrown some snow on it! Ha! Great photos, thanks.

Jayne-It is a beautiful animal.-I just wish it stayed longer so I could film it.

Pa-birder-I'm actually an anti-lister-this is just a once a year treat for now but I do want to use e-bird.

steadyjohn-At one point I sneezed and almost took care of the problem.-I did actually tell them that it would probably burn out itself-but Portland's finest love this stuff-without it they'd be bored!

Larry, in spite of all my birding efforts you are still 10 birds ahead of me! It's a race to the finish line now! Good luck this weekend!

Kathiebirds-I'm going to be cheating a bit as I am tagging along with some birders who are pretty experienced with the January listing thing.-good luck!

I hope you had a good weekend. I was busy most of the day Saturday and Sunday it rained. I'm way behind you now I'm sure. I'm waitng for your new post to see what you "captured!"