January Is A Great Month To Keep A List Of Birds 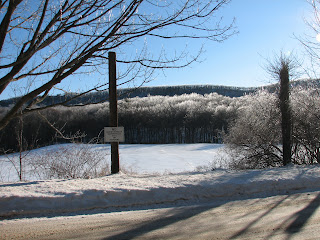 Last year I was introduced to a listing game called "Big January." The goal is to find as many species as possible between January 1st and January 31st with a minimum goal of 90 species(for CT). Some birders take this game very seriously and go at it with a vengeance! With the encouragement of another birder, I decided to give it a try last January and actually ended up exceeding the 90 species- but... I had a lot of help. It was a fun experience. I had a chance to see several new species of birds and visited some great birding areas for the first time. I learned that the key to getting a good list is to make lots of visits to the shoreline areas. On the down side, by the end of the month, I realized that the scope and tripod I own aren't adequate for serious birding. 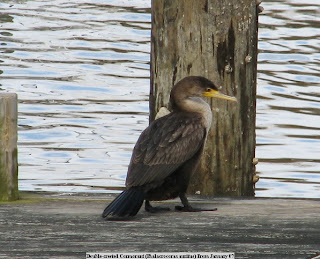 This year, I decided that I probably don't have time to rack up a big list of birds. Who needs to play this silly listing game anyway? At least that's what I thought until I saw Common Redpolls at my workplace bird feeder on January first and a Gray Catbird a few days later. Then I started thinking-Those would make for two pretty good birds to start a list. So I am making a compromise. I'll keep a list of species that I see in January but I'm not going to worry about how many I end up with. If it's 70, that's fine with me. If it's 95, great! Either way, it's a nice way to make the month of January a little more interesting. So far, I've only managed to get out for one morning of birding and stayed in my local area. Besides the two species I mentioned above, here's what I've got so far:
-
Canada Goose, Mute Swan, Mallard, Common Merganser, Northern Harrier, Sharp-shinned Hawk, Red-shouldered Hawk, Red-tailed Hawk, American kestrel, Ring-necked Pheasant, Herring Gull, Greater Black-backed Gull, Rock Pigeon, Mourning Dove, Belted Kingfisher, Red-bellied Woodpecker, Downy Woodpecker, Northern Flicker, Blue Jay, American Crow, Black-capped Chickadee, Tufted Titmouse, Red-breasted Nuthatch, White-breasted Nuthatch, Brown Creeper, Carolina Wren, American Robin, Northern mockingbird, European Starling, Cedar Waxwing, American Tree Sparrow, Savannah Sparrow, Song Sparrow, White-throated Sparrow, White-crowned Sparrow, Dark-eyed Junco, Northern Cardinal, Red-winged Blackbird, House Finch, American Goldfinch, and House Sparrow.
-
I think that adds up to a total of 43 so far-not much, but it's a start. I will keep you updated on any new additions as the month rolls along. The ones in red are the ones that I considered the more difficult species to find.
-
Are you keeping track of the species you see in January? If not, you've still got 21 days to get your list together and join in on the fun! Set your own goal if you'd like to or just keep track of your total whatever it may be. Any species you see in your state for the month of January counts- as long as it's not caged or domestic. You can post your results on your blog or mine at the end of the month.
Posted by Larry at 7:36:00 PM

I have only cleared 90 species in January once, in 2006 when I saw 97 species. I also came close in 2004 with 82. I should clear 90 easily this year since I am already up to 75. (Those are not state lists, but they were compiled over a few states with similar avifauna.)

There certainly a lot of ways to play the "birding game". My local list has always been very important to me, and also keeping track of the numbers EBIRD.ORG. EBIRD also help track lists by location, last I finished January w/ 111 in Mass. (thanks to an 88 species day during the superbowl of birding in essex county) and 235 for the year. This year I will also keep track of my "human powered birds", from home, via walking or bicycling...note the BiGBY link for human powered birding on my blog. There are nearly 200 people onboard from aorund the globe!.

Sounds fun! I wonder how many we could see in northern Illinos? We'll let you know! :-)

Larry, I'm so found of brown creepers. I saw my first one in Livermore Falls, Maine a few years ago. Haven't seen any since I moved away. It's such a sweet, plain looking bird; easily overlooked but so interesting to watch! Sounds like a fun game, maybe I'll join...

Tom-It looks like I hit upon a topic of interest for you.-I'm really not in to the listing games yet but keeping track of january species seems like an easy enough way to play the listing game for a short time.-111 sounds like an impressive list for january.-I finished in the mid 90's last year.-As I said, I don't think I'll be putting as much effort in this year but will still keep track.

birdfreak-great! I'll be curious to see how you make out.

kathie-Good Kathie-Don't worry about how big the list is-just see what you end up with and let us know!

john-Let us know how you make out this year in your home state!

January is a great time of the year for listers! You have 11 more months to get those birds you missed in January! Yep, do keep track for sure!

monarch-I'm not really a lister(other than a life list)-but keeping track of birds on a list for 1 month is an easy way to start.

Larry, you have convinced me. For the first time, I will make a list from January 1 to January 31. I just made a note here on my desk. I've never listed before, so this should be interesting. I'm sure I won't have a high number, but I might surprise myself and will let you know what I find.