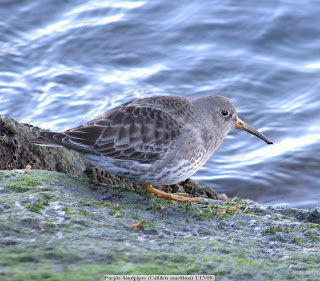 Learning to identify shorebirds has been a slow process for me. I was at Meig's Point today in Madison, CT, struggling to see distant shorebirds using a sub par scope and the windy conditions only made things tougher. I decided to walk out onto the rock jetty to get a closer look. It took a while to make my way to the end because some of the rocks were quite slippery but it turned out to be worth it. I was able to see features on this Purple Sandpiper; like orange at the base of the bill and orange feet that I wasn't able to see from a distance. 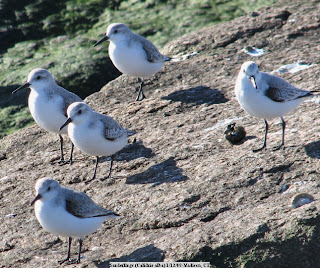 I saw these Sanderlings flying as a flock and landing on a rock, but to be honest I wasn't sure that's what they were until I looked at them from 10 feet away. It was nice to be able to see their black bill, black legs, and white breast. One of the shorebirds that I saw while out there had me guessing so I asked a forum to help identify the photo of what turned out to be a Dunlin. 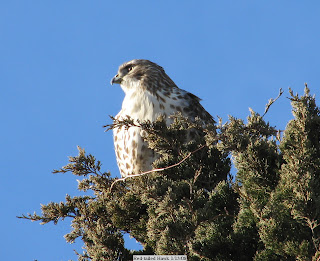 I saw this juvenile Red-tailed Hawk while walking the trail on Willard's Island in Hammonasset Park. I was caught off guard when a Northern Harrier buzzed right over the head of the red-tail. This hawk didn't even flinch. 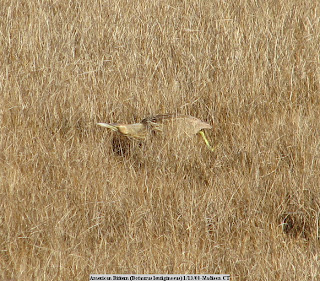 If I hadn't been looking right at this American Bittern , I probably never would have noticed it. Can you see the bill, the eye, and the back leg? Sneaky birds they are, I tell you!
-
Saturday's Yellow-breasted Chat-I was only able to squeeze in a couple of hours of birding on Saturday but I did see my first Yellow-breasted Chat on Lieutenant River Lane in Old Lyme. I was once close enough to a chat where I could actually hear the bird but never even had a glimpse of it. I had to wait about an hour but finally got a great look at it. First a male cardinal popped up on top of a bush and started chirping. After the cardinal gave "the coast is clear" signal, the chat decided to join him. It's breast looked like it was painted with yellow fluorescent paint.
-
Total for January is up to 66-I was able to add 22 species to the January list bringing the total to 66. Every bird from here on in is going to be much tougher for me to come by. Here are the species that I added to the list this weekend: Red-throated Loon, Double-crested Cormorant, American Bittern, Great Blue Heron, Turkey Vulture, American Black Duck, Common Goldeneye, Bald Eagle, Cooper's Hawk, Black-bellied Plover, Ruddy Turnstone, Sanderling, Purple Sandpiper, Dunlin, Ring-billed gull, Horned Lark, Ruby-crowned Kinglet, Eastern Bluebird, Yellow-rumped Warbler, Yellow-breasted Chat, Eastern Towhee, and Red-crossbill.
-
I'll leave you with this short video of Purple Sandpipers feeding at the end of the rock jetty at Meig's Point in Hammonasset Sate park today.
Posted by Larry at 7:30:00 PM

Wow, these are pretty good additions to your list!
And very nice pictures, too.
Congratulations!! I haven't seen a Purple Sandpiper since 1992, so it's been a while. Thanks for the pic and for reminding me I ought to go and search for one soon...

Larry,
Great January list! I'm glad you live somewhere where in the winter you can still get some shorebirds. No such luck here. Congrats on the Yellow-breasted Chat and the Bittern. My own year list is only at 59. I guess I need to get out more.
Vern

jochen-Thanks for the nice comments-and go get that Purple Sandpiper!

Pa-birder-If I couldn't go to the shore my list would be about 45.
During the Christmas count I mentioned that some groups hit 117 while my local group hit about 60 or 70-The most important thing is enjoying seeing the birds that you do come across-I think.

Great birding. I love your photos.

Never seen a Purple Sandpiper!! Every time I go to see one they are not there! Great work and love your video!

Liked that video, I could hear the wind whipping.

Great Post. A Chat in the middle of the winter! And Common Redpolls, too. Wow, you do live in a different part of the world than I do! I'd love to see a Purple Sandpiper! Thanks for sharing the video.

Monarch-And they were probably there 5 minutes before you arrived!

Laura-If I could have rules like that my January list would get bigger at a much faster rate!

greg-The Chat was a bird reported on the rare bird report.-redpolls are here this year because of the winter finch irruption but aren't normally in CT.-Purple Sanpipers aren't too much of a problem to find though.-thanks

Nice Photos Larry, the video of the Purples is very nice as well as the posture of Bittern! Coastal trips are always nice for us "landlocked" birders, especially in January...when almost everything is a year bird!

Shore birds puzzle me, too, Larry. Probably if I went with some naturalists (we have a great Naturalists society here in my part of Nova Scotia) or hung out with a birder or two, I'd learn more quickly than by saying, "I must bring my birding book with me down to the shore!' Because we know that will not likely happen! (I'll bring my native plant book, always!)

Larry, I am quite jealous of your January numbers! Having a newborn son has put a damper on my winter birding. The trade-off is well worth it, although I am very much looking forward to getting back out in the field to raise the old life list up a bit here and there.

Sara at Come Away With Me said...

Thank you for visiting Come Away With Me and leaving an encouraging comment. I see that you love birds! I haven enjoyed looking at your photos. There are so many colorful birds out there, but we don't see many of them here in Southern California...or maybe I'm just not looking!

Cool blog! I envy you the Purple Sandpipers - never been on the right coast at the right time to see one. Good luck with the January list!

Tom-Thanks-I thought the Bittern posture was pretty cool myself.I guess I'm lucky not to be too far from the coast.

jodi-I am learning shorebirds but at a very slow level.Some times I do birds with people who know a lot about shorebirds which can be discouraging when I realize I've got a lot to learn but hopefully a little bit of knowledge rubs off on me.

Nervous Birds-The birds will be waiting there for you whenever you're ready.-I always thought that nervous birds was a humorous name for a blog-very catchy.

sara-Your welcome-I would think there should be plenty where you are-maybe it's time you turn your camera on to some more birds!

John-thanks John-I enjoy keeping an eye on your blog as well.

Larry, just checked my list for this month. I'm only at 46! I'll post it on my Blog in the next couplke of days. Guess I'd better hurry up and get out there! I was lucky to see white-throated swifts yesteday. I've never seen purple sandpipers though. That bittern picture is awesome!