A Case Of Mistaken Identity 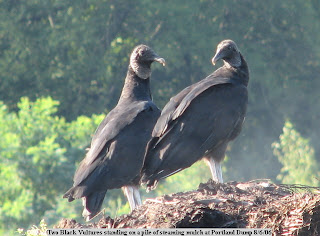 Last August I bought a 1 gig sd card which meant I could take a lot of pictures with my camera at one time instead of the limit of about 10 that I had before that. I was very well pleased with this new option-which gave me an idea. I thought-I should leave my binoculars and field guide at home so that I can concentrate on taking lots of new pictures-maybe even some that are worth looking at.

So here's what happened. I was driving around town looking for some photo opportunities ,when I passed by the town dump and saw some Turkey Vultures---a lot of them.
I walked in slowly (it was closed), and started clicking away. I noticed that a few of the vultures didn't have red about the head and figured they must be immature . -no problem.

Later that day, I took a look in my field guide at the Turkey Vultures and saw that the immature ones didn't have red on the head.-"O.K. that must have been it"-I said.

A Black Vulture never even crossed my mind at the time, because I've never even seen one reported around Portland. I'd never seen one myself before, and they're still very uncommon for most of the state. They are known to be more aggressive than a Turkey Vulture, capable of driving them away from a carcass. They hunt by sight, not smell and occasionally kill small animals to eat.
Months later , when I keyed in on the two vultures in the photo, the light bulb went on-then a sick feeling came over me. I decided to pull out the field guide to look up Black Vulture. Wouldn't you know the description matched my photos to a tee. I had missed out on what have been an exciting find for me.

I'll never intentionally leave my binoculars and field guide behind again.
Posted by Larry at 7:29:00 PM

Oh well, it was exciting after the fact! You still learned alot about black vultures and carrying the "essentials". Nice picture- a black vulture would be a lifer for me!

Lynne-What you say is true.