Note taking And Checklists-How Much Is Enough? 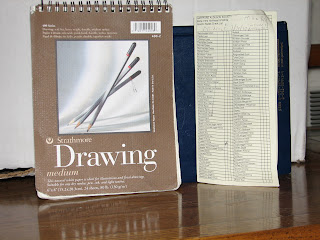 I recently posted a 1972 Checklist from a CT. Birder. After I saw that list, I started to rethink my current system of keeping records. What is that system? Therein lies the problem. I haven't stuck with a consistent way of recording what I see.

When I started actively birding, I simply kept a life list. I then progressed to taking notes and recording the different species I had seen at each location. The problem with this method, was that the combination of field notes and a list of species seen made for a mess.

I bought some Thayer birding software called Birder's Diary to try to clean things up. This worked very well for about two years. I kept records of what I had seen at each location. It allows you to generate a very handy report. It does allow you to get a profile of what types of birds you are seeing in each area. I compiled a bunch of information over the two years. Then I started thinking-who cares? Is it really worth the extra time and effort to do this?

When I saw that 1972 report, I thought that it would be interesting to look back on what birds you were seeing form 30 years back. I decided to go back to the basic checklist method to record not just the species seen but also the actual numbers of birds. I realized after one day of trying to do this that it was not for me. I can't go out to watch birds and try to get an exact count at the same time. It just disrupts the flow of things. It just takes the pleasure out of it.

This week I came up with a compromise for myself. I came up with a system that would allow me to keep a record of species seen as well as a rough estimate of number of birds seen. On the checklist I will do the following:

This may seem complicated, but it is much easier for me than to try to count actual numbers of birds. I also keep a small sketch pad to make notes or sketches.

That's where I'm at for the moment. Trying to maintain a balance between keeping some kind of record without taking the fun out of birding. Hopefully, this system will work out. Do you keep records of what you see? What type of system do you have for keeping records?

I sort of keep a life list, but that's about it anymore. For a while I kept place lists, but find the record-keeping to be too tedious.

I almost think that I can remember a place by the birds I've seen there and almost don't need to write them down.