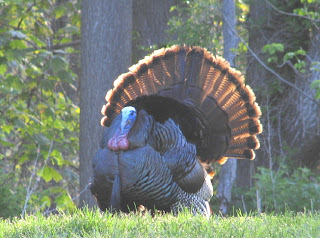 I read a recent article in the Hartford Courant which stated there has been a big decrease in Connecticut's Wild Turkey population over the last few years. They are attributing much of the decline to the wet spring weather we've had in Connecticut over the last two years.

If there is a lot of wet weather when hens are sitting on the nest, they don't have a chance to dry their feathers. This causes them to give off a stronger scent which makes it much easier for predators like coyotes and fishers to find them. After the predators find them they generally don't want to make small talk-they just eat them. Last June there was more wet weather, causing some of the newly hatched young turkeys to get a pneumonia-like illness that kills them.
Wild Turkey was one of the last birds to make it on to my January List. A couple of years of good spring weather should bring the numbers back up.
Here are a few interesting facts about the Wild Turkey :

They are going to be tracking sightings of Wild Turkey in Connecticut between June 1st and August 31st. This should help them get a better idea of what the numbers are at now. They estimated the poulation at about 40,000 four years ago. If you would like to report a sighting starting in June , you can call 860-642-7239 or e-mail- michael.gregonis@po.state.ct.us.

Interesting facts regarding these Turkey! Wonder what is going on with them?? Thanks for keeping us posted on the situation!