Does This Day Have To Come To An End? 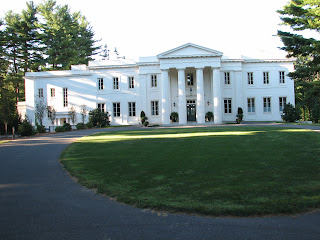 It was Sunday morning, and I was already heading toward one of my most familiar birding spots. Suddenly, I decided to turn around and head in another direction. I was due to try a new location. Some times it's sort of like an internal battle to try something new as opposed to the status quo. I find this applies to life in general, not just birding. I ended up at the grounds of The Wadsworth Mansion on the grounds of Long Hill Estate. The estate was owned by Colonel Wadsworth, who was an authority on the science of forestry and conservation. He had the same guys do his landscaping that designed Central Park in New York. it's a really nice area with a variety of plantings, surrounded by dense forest. 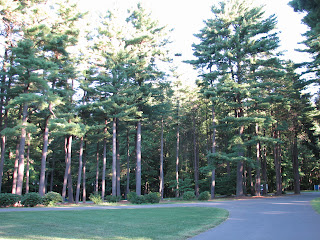 It offers a nice mix of History and natural beauty. I don't know why I've never bothered visiting this spot, but I'm glad that I did. As I was walking one of trails through the area, I spooked up a couple of young White-tailed Deer. I enjoyed views of Pileated Woodpeckers, Pine Warblers, and Common Ravens. There was a couple of drawbacks to birding here. The trees were tall and dense. This made it a bit difficult to lock in on some of the birds. There also had to be hundreds of American Robins there. 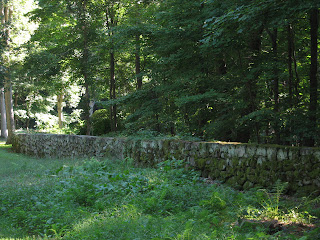 I really enjoyed walking around these grounds though. I want to take a trip back here when there are fewer leaves on the trees.
After I left, I drove by the house that I spent the first six years of my life in. The house and yard did not look the way that I remembered it. One thing that did occur to me was that we were somewhat poor in the material sense. I had no awareness of this at the time. I only have good memories of living in that neighborhood. It's amazing how much fun we created (kids in the neighborhood) with so little. I never worried about what we ate for supper, or whether my sneakers had holes in them. We didn't have a lot of fancy toys. In some ways, I feel sorry for kids of today that have so much to keep them entertained. You don't need to use your creativity to have fun anymore.
Do You remember your first home? 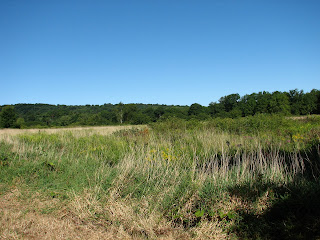 I took a ride to nearby Miller Road in Middlefield. There are a few large houses in the area, but they managed not to wreck the surrounding land.Birding this area is a little different for me.You actually just walk along the road which is bordered by fields, swamp, streams and woods. I often end up talking to the neighbors walking by, who are proud that they've been able to help protect the remaining land.

The weather was so beautiful today, that I moved along at a snail's pace. The cool, crisp air was so refreshing. It didn't matter which birds I saw because they all looked incredible standing out in sharp contrast against the blue sky. I did see a male Scarlet Tanager in non-breeding plumage. It was a kind of greenish yellow color with black wings. For a moment, I thought that I had spotted something really unusual. There was also about six Palm Warblers feeding in a couple of trees. 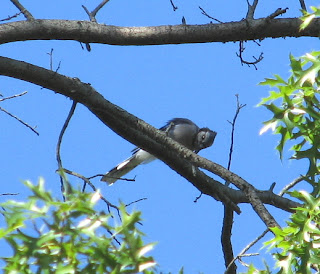 I noticed the way Red-winged Blackbirds react when they are scared off by me. A few fly off followed by a few more, and then the whole crowd. Like a Cavalry abandoning a battlefield. Blue Jays, on the other hand, seem to have a specific strategy in mind.There was a group of about 8 Blue Jays in the area.They started making alarm calls when I entered their territory. They then took position in certain trees that surrounded my location. Keeping contact through vocalizations, they slowly worked their way closer to me until they reached their desired locations. I like Blue jays. They seem very clever to me.

I wished this morning could have lasted longer. I felt like dropping all of my responsibilities, and just savoring the entire day. I know that Fall is almost here. I know there will be more days like this one. I am thankful for that.
Posted by Larry at 4:38:00 PM

To bad we can't mess with time and reset it to live over again! Fall is almost here and birds are already moving!

And I'm thankful for you and your posts, Larry. I know what you mean about wishing for more free time to enjoy nature, wishing that it would last longer. And when I can't get out I turn to your blog. And yes, there will be more days...

The birds are moving out here. The RW Blackbirds are gone and other than finches and chickadees, things sound pretty quiet in the bush. I moved many, many times as a child. I was looking at pictures of my 4th birthday party when we lived in Pembroke ON. The house was old and shabby, lightbulbs at end of an electrical cord. But I didn't notice or remember that. Material things are not that important.

Patrice-thanks-Don't put the beauty of nature on hold-seize the day!

uth-You're right-material things are not that important--but it's hard to pass them up when they fall in to your lap.

Hi Larry,
(I accidentally deleted my comment, so I'll try again)
This was an interesting post--especially the part about you driving past your childhood home and the memories you had. I was just thinking about this myself yesterday and how as an adult I realized our family was "poor" in a monetary sense when we were growing up. I never felt under-privileged or deprived because all of our neighborhood playmates were pretty much in the same boat. We all wore hand-me-downs and made our own fun. A really big deal was coming up with 25 cents and riding our bikes uptown to buy a can of cold Shasta grape pop. Those were definitely the good old days!

Larry, your walk sounds so refreshing! Your descriptions of the rw blackbirds and blue jays is dead on.

I haven't seen the house I grew up in for about 20 years. It's not in a very good part of the city. What was a nice neighborhood is now dangerous, I'm afraid.

Like you, I didn't realize we were a bit poor. We had most of what we needed but not everything we wanted. The childhoods we experienced were loaded with physical activity and fun - our imaginations were wild. Every day was a new adventure - usually outdoors with friends. No cell phones, text messaging, computers, cars. We walked. Those were the days.

No one can tell me that the 60s and 70s weren't the absolute best time to grow up. Things were changing, but nowhere near as frenetically as now; it was safer (in the burbs and smaller cities, anyway) and quieter. Life was all about playing outside with your friends and siblings, enjoying the sunshine and the rain, and just being a kid. Now it's all cellphones and computers and "busy busy busy."

That was a lovely walk, Larry - both the birding and the look back at your childhood.

I, too, grew up in a home where there were many children and not much money. It wouldn't have occurred to us that we were poor. Our riches were like yours - the natural places we explored and the friends who accompanied us on those adventures.

I never knew ravens were so interesting to watch. But then, I had never gotten to really observe them before our little vacation!

I am jealous you got to see pileated woodpeckers. They are just starting to make their re-appearance here in NE. I hope they will one day be common enough that sightings don't make it on the rare bird alert for our state!

And I grew up "poor" but didn't know it until we weren't anymore!

Mary-neighborhoods do change over the years.-Not always what they once were.-Yes there was plenty of physical activity-not as much any more unless you play team sports.

Dana-Pileateds are fairly common in Connecticut, but you have to go to certain habitat to find them-they can be shy too-Ravens are definitely interesting birds.

What a beautiful place and an even more beautiful day Larry. So glad it was so enjoyable.