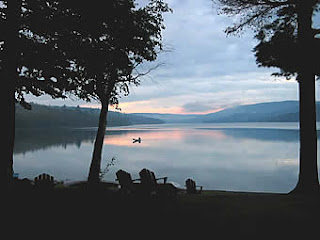 It was about 4 years ago that I was a part of a small group of fishermen who spent a week at Nahmakanta Lake Wilderness Camp in Maine. It was about a 10 hour drive to reach the camp, with the last hour being a drive down an old logging road. This is not everyone's idea of a vacation spot. It is in a remote area located in the middle of Maine's wilderness. It also lacks most modern conveniences. These are the types of areas that I prefer. I love hearing the sound of loons calling across the lake.
What follows are a few of my memories from this trip. Unfortunately, I never bothered taking photos ( I rarely did on these trips).
The Mysterious Animal At The Top Of A Tree
I believe it was the first day after we arrived, that I went for a walk on an abandoned logging road with my cousin Scott. The area was full of dead trees, many of which were filled with woodpecker holes. As we rounded a corner, we came to a sudden stop. There was a strange animal near the very top of one of the dead trees. We were totally confused. Was it a bear cub?-no, not a bear. The strange part was that it looked like a primate the way it used it's hands to grip the tree. It seemed to be eating bark. The animal then started climbing back down. Not knowing what we were dealing with, we decided to leave.
When we returned to the camp, we described the animal to Don (the owner), and asked him what it might be. At first he suggested a Fisher, but after further description he decided it was probably a Porcupine. I had no idea that Porcupines climbed trees. I thought that they looked like little balled up woodchucks with a spiked hairdo. We're still not certain as to what we saw, but we'll go with Porcupine. Here is a link to Porcupine. It sure didn't look like the one in this link.It's body was stretched out, it didn't have quills sticking up, and it had hands that really gripped the tree.
The Ravens In The Prehistoric Forest
On a second hike to a different area, we walked through an old growth forest. The whole area reminded us of a scene from Jurassic Park. The base of the giant trees had many exposed roots.These roots were covered with a thick moss, and there were tons of fern all around. We came to the edge of a cliff, that overlooked a huge gorge.It was then, that we started to hear the strange sounding communication taking place between two large black crows. Although I wasn't a birder at that time, we figured out that they must have been Common Ravens. We watched them interact and communicate for at least 20 minutes.We were fascinated by their array of strange sounds. We also decided by their actions, that they must be very intelligent.
Two Years later, I would once again find myself in awe of Ravens. On a very windy day, I saw two Ravens seemingly being blown all over the place by the gusty winds. It wasn't until I watched them more closely, that I realised that they knew what they were doing. They put on an aerial acrobatics display that blew my mind. They were rolling, tumbling, twirling-you name it.They seemed like they must be having fun in some sort of way. Ravens are awesome!
The Boat-flipping Dust Devil
There was a group of us standing along the shoreline of beautiful Lake Nahmakanta on a bright and beautiful sunny day. As we looked to our right, we saw some trees rustling at the top of a steep hill. A burst of twirling wind could be seen traveling down the edge of the hill. It seemed to form a small cyclone.It was clear, but started to pick up debris as it traveled along the shoreline in our direction. We stood and watched with great curiosity. It wasn't until the funnel came within ten feet of us, that we decided to step back a bit. This turned out to be a good decision because of what happened next. Two boats were suddenly lifted 10 feet in to the air and flipped face down in to the lake. We watched as the funnel continued to travel along the lake and finally disappear. -(I used the term dust devil, but I believe there is a specific name for these type of mini-wind storms that occur in Maine. If you know what they are, please let me know)
We dragged the boats out of the water, and on to the shore. One was a canoe, and the other a fourteen foot Lund with a motor. The owners had taken a day trip to buy supplies for the camp. We wondered what the owners would think when we tried to explain what happened to their boats. An older gentleman who had been listening from his cabin said "Don't worry boys, I saw the entire thing." We were glad that he had seen it too.
This area is great for birding, wildlife, and fishing. The camp is run by Don and Angel
Hibbs. They are very nice people, and also very knowledgeable about the area. Their are canoes located at a dozen different ponds located 1/2 mile to 4 miles from the Maine Camp. All of them are completely undeveloped.
You have the option of cooking yourself, or preparing your own meals. We did a little of both. The food that Angel prepared was excellent. My favorite was the blackened salmon. Click here, if you would like to learn more about Nahmakanta Lake Camps.
Posted by Larry at 12:25:00 PM

Sounds like a perfect trip to remember for a very long time!

Sounds awesome. I couldn't believe how many dead porcupines we saw in Maine earlier this month.

Patrick-I wonder what happened to them?

Well, Larry, the boat-slipping sounds very eerie to me but I would love to witness it. Your descriptions of what you saw raised the hair on the back of me neck!

Nahmakanta Lake Wilderness Camp sounds like a wonderful spot. I'd miss modern conveniences after about two days but I think it would be worth it to see Ravens and some sort of creature resembling a porcupine atop a tree!

Mary-There are some really strange weather patterns in places like Northern Maine Woods. I've experienced 5 foot waves on a lake, a tornado, and this micro burst ot whatever it is.

Hi Larry,
That sounds like a great place for a vacation. I would surely enjoy the silence--no cars, trucks or planes going by.

Thanks for the wonderful story.

You make me long to run back to a forest, any forest. I love urban living but couldn't there be some real wilderness nearer to Chicago?
I agree with your opinions of ravens--what wonderful animals.

Ruthiej-The silence is golden- We're the loudest thing in the woods when we go!

Sarala-There may be wilderness closer than you think.-Have you checked out the acreage of the nearest preserved land?