The Birds Were hard To Come By 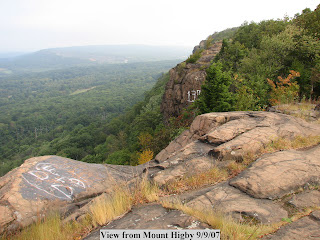 I decided to combine a little exercise with my birding Saturday. I hiked up Mount Higby in Middletown. This area is part of a long volcanic ridge. I've never seen any bird reports come from Mount Higby. My hope was that I might see a few birds on the way up, and perhaps some migrating hawks on the way back(they like to use the updraft from these ridges). The hike and view were very nice, despite the extreme humidity. There was a strong breeze, so that helped cool things off a bit.

Surprisingly, I only saw 3 birds on the way up! American Crow, Mourning Dove, and a Wild Turkey. I did hear a few birds including: Black-capped Chickadee, Cedar Waxwings, Blue Jays, and American Robins. I did take note of the fact that there wasn't any sign of water up there. No brooks,no puddles, not even ant spit. 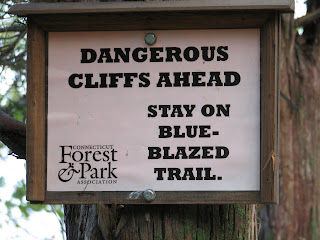 I could have hiked all the way over to West Peak, but I forgot to bring water with me. Besides, I didn't want to take a chance of running in to the Black Dog. There is a legend about a strange black dog that has been seen roaming the area by hikers. It supposedly makes no sound when it barks. I'm always curious as to how a legend originates. Are there any well-known legends where you live? 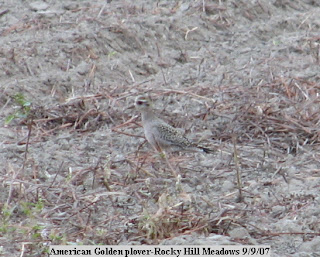 Sunday, I decided to start the morning at Rocky Hill Meadows.there have been good numbers of Baird's Sandpiper, Buff-breasted Sandpiper, and American Golden Plovers spotted in this area. I really like to check these fields out after it has rained. Unfortunately, it has not rained for some time. These shorebirds are considered to be "good birds" to see at an inland location. I could tell from the comments in reports, that the area was starting to get mobbed by birders. For this reason, I decided that I would be the first one there and the first one out. I quickly came upon two American Golden Plovers. To be honest, I wasn't sure what they were at first. I forgot my field guide, and have seen only one Golden Plover which happened to be in breeding plumage at the time. I identified it later using the photo. . This one has quite a prominent eye stripe. It's amazing how different shorebirds can look in different stages of plumage. Several cars started showing up, so I decided to head out and explore other areas. 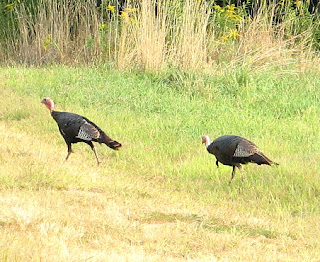 I took a ride to an area that is owned by the State of Connecticut. There are a few fields and wooded areas surrounding some mental health facilities. I caught a glimpse of these turkeys as I was driving along. I then traveled to a field on the corner of Silver Mine Road and Farm Road.It was there, that I saw a Sharp-shinned Hawk, 5 Black Vultures, and a Brown Thrasher. 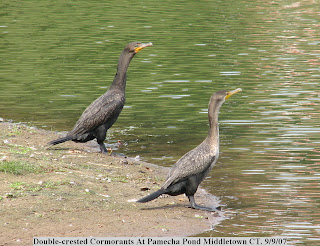 I pulled my truck over to get a photo of these Double-crested Cormorants that were in a dirty little city pond along route 17. Maybe it just looks dirtier than it is. I enjoyed seeing signs of life here. 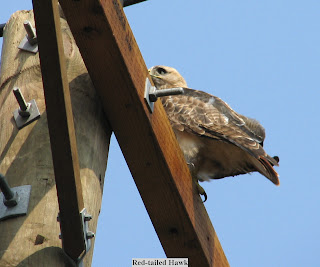 I continued to look for potential birding spots along the way.- I checked out a few cemeteries in the area to see how much land and how many trees they had. It seems that every fall, someone finds interesting birds such as a Lark Sparrow at some cemetery in Connecticut. I'd like to find one on my own some time! I ended the day getting a close view of this Red-tailed Hawk. Almost made for a good picture if I could have just seen more of it's face. I never committed to birding at one spot this weekend. I felt as though I was digging for change underneath couch cushions. Next week, I'm picking one nice spot that has water. I'm going to do a few hours of birding in that one area.
What was your favorite bird sighting this weekend?
Posted by Larry at 5:52:00 PM

The nutty red-breasted nuthatches were a blast to watch. The group of white-throated sparrows that moved in were sweet too.

Hi Larry,
I love the photo of the cormorants. I've only seen them while they're in the water.

I cannot think of any legends here in NE, but in TX there was the Chupacabras, a nasty fanged creature that sucked the blood out of its prey. Something weird turned up in TX (you may have read about it) that some are claiming is a real one.

Or perhaps a mangy, diseased dog...but that, too, could explain the origins of the legend.

Hi Larry,
I don't know of any local legends to share.

I like your wild turkey pictures...they must be young ones (short beard). I'm glad you got to visit so many different spots even though you didn't think it was a successful birding day, you may have found some good spots for next spring's migration!

My favorite sighting of the weekend was a hummingbird--sitting on my thumb (but you already knew that!)

We have a haunted old church near me, but I've never been.

My favorite sighting of the weekend was watching a pair of mature bald eagles flying together over a lake; the female then went to the nest tree while the male did some fishing--that was really exciting!

Hi Larry,
my favourite sighting was a huge warbler flock, comprising of more than 100 birds of 13 species. The favourite one must have been Black-and-white Warbler as I love the clownish way they hop through the branches. The rarest was surely a Cerulean Warbler. I knew it was a good bird but apparently fall sightings are very, very rare around the Great Lakes, so I was a rather happy chappy.

I didn't get out birding this weekend since it rained the whole time! But this does remind me of a time when I headed out to Hawk Mt.!

Lynne-I miss the White-throated Sparrows, and will be looking forward to their arrival.

dzugman-I enjoy watching eagles too.-Sounds like you had a great view of them.-Time to get some pictures of that church?

jochen-Wow! That is some great sighting.-I get a little overexcited when I see a large amount of Warblers.-Sounds like you did a good job being able to pick out 13 species!

Monarch-I'm going to attend my first Hawk Watch this year.-Is that what hawks use to tell time?

Larry, my goodness! You really get around! I think the heat is keeping me indoors a lot. I don't see much, as a result. My birdies are scorched. Over the weekend, I saw a Cooper's Hawk and I zoomed in on a bird that I thought might be a sandpiper but it turned out to be a Killdeer. Oh, well.

We had a rainy weekend and birds are getting more scarce here by the hour. It is hard to tell where migrants may turn up. You did very well, but you worked hard for your discoveries.

My favorite sighting of the weekend was a very cooperative Prarie Warbler...but it couldn't compare to the 2! Lark Sparrows at Jones Beach the weekend before...And yes, it was pretty darn cool to be in on their discovery.

I spied a couple of
American Goldfinches. Not a notable find but they were making a racket while perched on a wire outside my back window. I'm guessing the loud calls were because there were juveniles begging from a parent but I may be misinterpreting some bird behavior. Predictably the birds flew off before I could focus my camera.
Otherwise I've not had much opportunity for urban birding.

Hi Larry,
My favorite sighting of the weekend was an immature White Ibis. A rare bird for PA and a lifer for me!
Vern

Mary-I get aroumd , but I don't go very far.-All these spots are within 10 miles of each other. Killdeer are cool anyway!

Ruth-I could make it easier on myself if I just went to the hotspots, but that's not me.

Sarala-If it was notable to you to see those Goldinches,it wa a worthy sighting!

Vern-Congratulations on your lifer!
Oh-wow-I just realized you said White Ibis not White-faced.I wasn't even really aware of that bird until I just looked it up.