A Walk Along The Forgotten Tracks 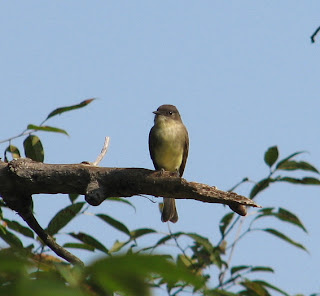 On Saturday, I decided to explore an undeveloped portion of the Airline Rail Trail. The trail was a former railroad line that ran from Boston to New York City. You can read about its fascinating history here.

It was a cool, overcast morning with much moisture in the air. I started my walk at Depot Hill Road in Portland. There was a parking area near a gate. Apparrently, this area is owned by a utility company. Right from the start, there was a flurry of avian activity-Northern Cardinals,Blue Jays,Tufted Titmice,Red-bellied Woodpeckers, American Goldfinches,White-breasted Nuthatches,Common Yellowthroats greeted me with a disorganized symphony of sounds.
There was something odd about the Yellowthroat that I saw. It had little dark marks on its cheeks. I later realized upon checking a field guide, that it was a first winter male.
After passing through this initial area, I continued to see a variety of birds. I was hearing chip notes coming from inside the tangled bushes along the way. I became a bit frustrated after a while as they turned out to be little brown sneaky birds that didn't want to come out in play. I doubt that they were Song Sparrows, as I have no problem phishing those birds out in to the open. I did see Carolina Wrens and House Wrens along the way.There were also a few Palm Warblers around. The have a habit of flicking their tale like an Eastern Phoebe does. I had a nice view of an Indigo Bunting which has a "wet" sounding chip note. 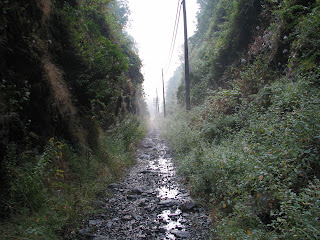 I passed through some areas that was just bursting with berries. The smell of wild grapes was delicious! As the fragrance wafted through the damp air, I could actually taste the grapes in the back of my throat. I walked through an area where the ledge had been blasted. It left a long rock corridor. Water trinkled down from the sides, even though we haven't had any real rain for weeks. It made the air seem thick, so that taking a deep breath required effort.

At one point, I heard a group-(It's actually called a murder of crows but it seems odd to say that )- of American Crows harassing a Common Raven.-(a group of Ravens has historically been called an unkindness of Ravens, but I only saw one Raven anyway. The Crows were being unkind to it though).

I passed under route 66 through a tunnel. Looking at the map, I had never seen this tunnel from the road, as it was completely hidden. I found that to be interesting. Even more interesting, was that there was a Northern Waterthrush piddling round in some puddles at the very end of the tunnel.I enjoyed watching it for a while as I slowly came closer to it. Northern Waterthrushes prefer slow running or still water where as the Louisianna Waterthrush prefers running water. During migration this rule does not hold as true. This particular bird clearly had a yellowish-tinged breast, which made identification easier. 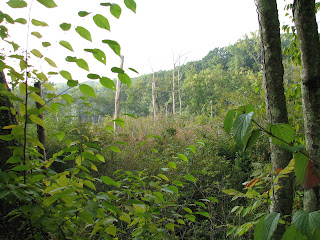 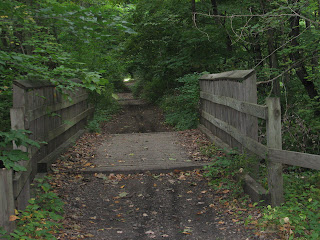 The last portion of the walk was a real surprise for me.The path cut right down the middle of a swampy area, but my feet stayed nice and dry-perfect viewing area. I enjoyed nice looks at 4 species of Woodpecker, Rose-breasted Grosbeak, Eastern Phoebe, unknown Warbler, and a myriad of other birdies. I stopped my walk at a road called Alden's Crossing.You could see a portion of the track tarred over.There was a nice little wooden bridge that stood above a stream.This made for a nice viewing area also. I had a terrific look at Wood Thrush, in all of its spotted glory. 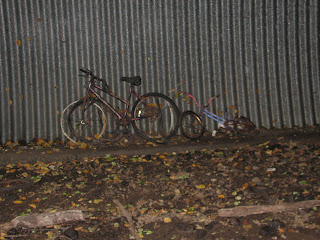 On my way back, I noticed the two bikes that had been abandoned in the tunnel. It was kind of sad to see the two bikes rusting away inside this old train tunnel. There was probably a time when these two bikes were cherished by the kids who owned them. Do they still come back to visit these trails? I can just imagine the number of people who must have traveled along this route, and the memories that traveled with them. These trails that have been left behind are a wonderful gift.

On my way back, I could detect the smell of a charcoal grill. Not a bad smell,-just enough to snap my mind back to the present. I'll be looking forward to walking the rest of this historic trail in the days ahead.
Posted by Larry at 8:30:00 AM

I haven't had much time to bird outside of my backyard lately so I really enjoy walking along with you. Your descriptions make it easy to immagine being there.

Nice post, I could almost see the trail from your description. I looked at the history of the rail, very interesting!

Gorgeous post, the kind that makes me want to be in nature. Isn't it great being a birder?

That my kind of exploring! So many great birds for sure!

Lynne-Glad you enjoyed it.-I've got a lot of walking to do.

Karl-Thanks for stopping in for a vistit!

Veery-Birding can lead you to a lot of great moments.

Monarch-Now that summers over,I imagine your posts will look much different.We'll see where your exploring brings you.

Interesting place Larry. Love the very wonderful descriptors you use. Makes us feel like we were there right along with you!

Wow, Larry, what a cool place! It must have been fun to see so many birds in kind of an undisturbed area.

Jayne-I thought I heard someone skulking in the bushes-maybe someone was there with me but I didn't know it.

ruthiej-I just really like trying anew place.-It adds quite a bit of interest for me.

Larry,
I swear you are a modern day Thoreau. We're lucky to have you!

Patrice-Thank you-I'm probably on par with whatever Thoreau is writing these days.=Actually you've reminded me of something-I've never read that book about Thoreau at that pond.-I'll put that on my books to take out at the library list.

Larry, you have been so busy and I regret missing your posts.

Your walk through this area looks loaded with life and I'm not speaking of birds only. It's lush and dense with water and protection. It's the sort of place I'd love to walk with you.

News: I'll be getting out of my back yard in October on a birding field trip! If I don't enjoy the group thing, I'll know where the hot spots are, at least :o)

Mary-I'll be interested to hear how the field trip goes.As far as missing my posts-Who has time to keep up with every blog on a daily basis. I just try to get to them as best as I can.

What an amazing place to go birding. One note on that grapey area, though--bears LOVE grapes, so look out!

I am completely intrigued by those bikes you found. You're sure they were abandoned? That seems so strange. I'm puzzled.

I need to find a beautiful walking place like this, especially one loaded with as much birdlife as yours!

dzugman-You can't see from the photo,but the bikes were rusted and one had a bent wheel.
I've seen bears a couple of times, and wouldn't mind seeing another.
It's always great to explore,even if the area doesn't always turn out be good for birding.

How do you have the energy to blog at 230 years old? Good to see someone with a blog of this type so close to home.-I'll add your conservacity blog to my blog list as well.-thanks for visiting.