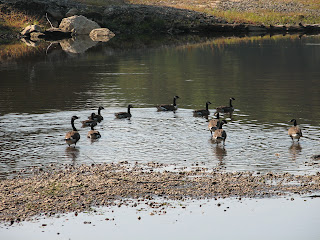 As I mentioned in my previous post, I have made a list of potential birding locations to explore. I have noticed a little area on the map called The Wopowag Wildlife Management area for some time now. On Friday, I finally decided to check it out first hand. It is located off of Wopowag Road, near the junction of 196 and 151 in East Hampton.

This area is a 400 acre patch of preserved land near the Salmon River.The accessibility to open area seemed to be very limited with a dirt road leading to the river being the primary path.There were also a couple of other short paths leading to the river through the woods.The woods were mixed deciduous and evergreen.There was also a lot of shrubs and thicket areas with areas of overgrown grass.
I only spent about 45 minutes in the area. My favorite birding moment came when I spotted one of those sparrows that I was not able to identify upon first spotting it. First I had to remind myself to keep my hands off the camera until I tried to get a better look at field marks. It had a rusty cap, eye ring, and a sort of pinkish bill.The bird had a dull washed out look overall.I checked the field guide and voila-it was a Field Sparrow ! It's not always that easy for me with sparrows. Some times I don't make a decision on the i.d. with juvenile birds. I was pleased to have been able to make the i.d. this time. One down, many more sparrow challenges to come.
Then I heard a noisy keeyar, keeyar, keeyar call. Oh I know that one-easy-a Red-shouldered Hawk-right? Wrong-It was a Blue Jay doing an imitation of one. I'll bet you that I was fooled by that call a couple of times over the last month and didn't even realize it. 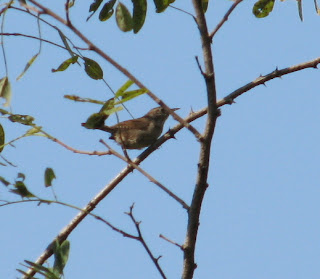 Can you tell what kind of tree this is ? Every time that I find a patch of these trees, I find a bunch of birds in them. There were House Wrens, Palm Warblers, and several other birds bopping around in them.

I worked my way down to the river where I saw the little flock of Canada Geese. It makes for a nice seen when they're in a river versus along side a pond where they walk all over their own droppings.

Across the street from the parking lot was a swampy area. I had a nice look at some male Eastern Towhees. There were four of them all together.

I would rate the area a c+. It has some potential, so I will be checking it out again in the future. It's one of those places that's worth a look before heading on to somewhere else. One of my favorite areas, Machimoudus Park, is right up the road.

I visited an undeveloped portion of the Airline Rail Trail today. I'll tell you all about that in my next post.

Larry, I've missed dropping by to see how your birding has been. You've obviously been doing very well. And Yes! - I can't tell you how many times a blue jay has faked me out doing a hawk call. Those rascally wittle birds :0)

I have seen very few Blue Jays here this year, likely few than I can count on one hand. I saw two yesterday. Your posts this week are methodical and interesting, but I had to poke a little fun at you today. All in good fun ;-)

Sparrows have always been, and will always be, difficult for me as the differences are sometims so very subtle. Looking forward to hearing about the Trail.

Cathy-Glad to hear that I'm not the only one who has been duped by the Blue Jay's Red-shouldered Hawk impersonation.

Jayne-I guess we just have to keep working at the Sparrows until we get them all!