Have you ever been fooled by bird songs? 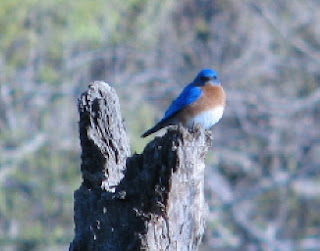 This Eastern Bluebird was not the bird I was hearing.

I heard a bird making a whistling type call in a patch of woods Saturday. It seemed to be coming from about 30 feet back in the woods. My first impression, was that the call sounded similar to an Eastern Bluebird's call. Could it be a variation of the Bluebird's call?

Just between you and me, I decided to try to imitate the call. Don't tell anyone because this is probably not a nice thing to do to a bird. Anyhow, I was able to mimic this call very well by whistling.

Sure enough, the bird came rapidly to the edge of the woods and landed right near me. -What was it? A Tufted Titmouse. The Tufted Titmouse has fooled me quite a few times with the variety of noises it makes. Have you ever had a similar experience?
Posted by Larry at 5:20:00 PM

They confuse me all the time and more-so with the mimic's! LOL I only wish the birds would listen to the tapes!

Birdsongs are not one of my best skills. The only warbler I can id by song is the black and white.

Those little titmice have fooled me for years, but slooowly I'm getting on to them.

I'm just not good enough to do birds by song, mostly, so I get fooled all the time!

Those Titmice are great foolers. They have such a wide range of vocalizations.

I love the challenge of identifying birds by their songs, but it takes some time in spring to remember all those songs forgotten over the winter.

Other sounds often confuse me - frogs, chipmunks that I mistake for birds.