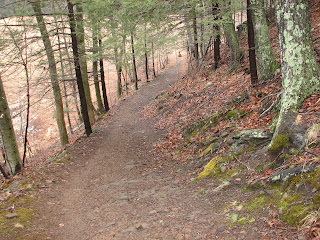 I visited Machimoudus Park today. I had the whole park to myself. Birds were singing away as I sauntered down trails like the one in the above picture. 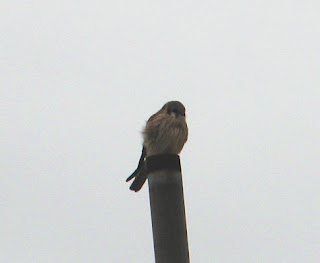 Machimoudus is a reliable place to find American Kestrel. It was very overcast today, and I was unable to get a good picture of this Kestrel. Interestingly, it would fly off when I tried to take its picture, but seemed to follow me after I left an area. 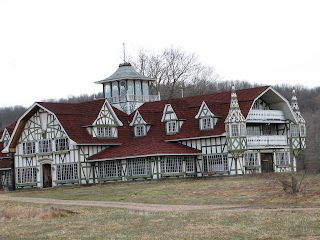 This is an interesting looking abandoned building on the grounds next to the park. 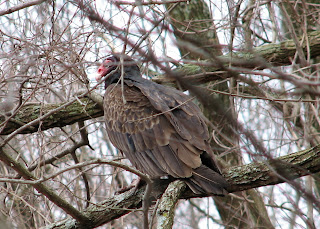 I saw this Turkey Vulture perched in the tree on my way out.

To sum up what I saw at the Park -( besides the Kestrel and Vulture).

I also saw a bunch of other stuff, but that should be enough detail.-Did you see any interesting birds today?

LOL- that turkey vulture can sing better than Sanjaya!!

Fox sparrows have been in my yard for the last few days and today I heard (but didn't see) a very wimpy sounding white-throated sparrow singing "Oh sweet Canada Canada". First of the spring!

No new birds this week:-( I wouldn't fly here either right now!
Ruth

You and Lynne have some nice birds. I'm afraid Ruth and I are in the same dull boat, except that I did see a pair of harriers doing an aerial mating display at Irwin Prairie close to Toledo. Very nice.

Lynne-Fox Sparrows are one of my favorites.-Love to watch them do the jump back scratch on the ground.
Ruth-Don't worry-they'll be coming any time now.
Cathy-Northern Harriers are great birds to watch-they can hover just above a field.

Wonderful list of birds you saw and looks like you had a wonderful day! Love your kestrel photo!

Most interesting thing today was a pair of chickadees checking out one of the nestboxes here.

Laura-It would be nice to have nesting Chickadees!