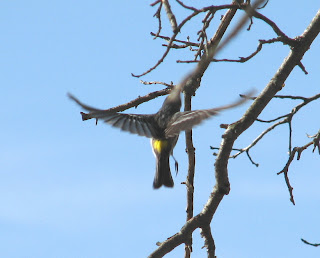 Saturday, I went on a birding field trip with The Hartford Audubon. They have numerous free field trips throughout the year.

I not only saw some nice birds, but also observed some interesting bird behavior.

22 people showed up. It was nice being around all the birders but a larger group can slow things down a little. The group leader, Stephanie, did a great job of making sure that we kept up a good pace.

The early part of the trip focused on observing birds that were around the airfields of Bradley International Airport. It was here, that I added my first lifer of the day. It was none other than the EASTERN MEADOWLARK. They can be found in certain areas of Connecticut during the year but I've never been in the right place at the right time. Savannah Sparrow, American Kestrel, and Upland Sandpiper were also seen at this location.

The Upland Sandpiper would have been a lifer for me as well, but I did not identify the bird to my own personal satisfaction. There was no question among the group that the bird was an Upland Sandpiper, but I wasn't confident about what I saw. A buffy appearance to the underside of the bird confused me. This may have been due to a reflection from the orange barrier that the bird was standing on. Do you have certain requirement before a bird makes your life list?

Next, we drove past some local farms, searching for more birds . We found a ROUGH-WINGED SWALLOW along the way. Someone spotted something that caught their interest in one field. It turned out to be 2 UPLAND SANDPIPERS! This view was much closer than the first. I was able to see the birds well enough to add to my life list.

We spent some time beside a farm pond which harbored a small Heron Rookery. We had nice views of a Yellow Warbler, Eastern Bluebird, Belted Kingfisher, Great Blue Herons and Killdeer at this location. One of the most exciting moments of the trip came when we saw a Red-tailed Hawk fly directly over us with a Red-winged Blackbird firmly attached to its back. The Blackbird piggy-backed for about 100 yards before letting go. What a sight that was! 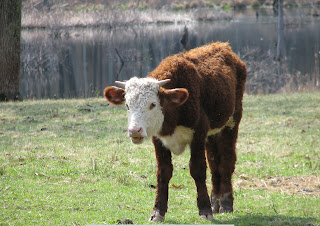 DO YOU HAVE A CAPTION FOR MY PHOTO? 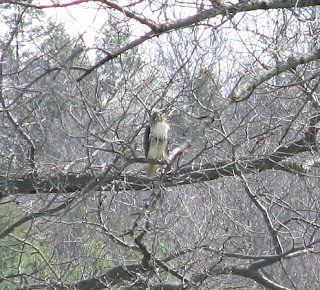 This Hawk had an unwelcome passenger.


The last stop for me was on an abandoned railroad trail. On the way in, we were checking out a patch of skunk cabbage. There were large numbers of Yellow-rumped Warblers. There were also Pine and Palm Warblers here. One pine warbler was seen taking material from an old nest for its own nest. A warbler that recycles-imagine that! On the way out we all saw our first BLUE-GREY GNATCATCHERS of the year.

I had to leave before the trip was finished but had a great time. I think we were at about 40 species before I left.
Posted by Larry at 11:59:00 PM

I definitely have to see the "lifer" well enough to pick up some definitive field marks (even if I didn't know the field marks before) that I can go back to my field guide with. For example, for the Eastern Meadowlark, the yellow breast with black band, which I could then go back with the general size, shape and location and say, yes, that was definitely a meadowlark. It's not enough for me for the guide to say it; if I didn't see it, it doesn't count. Also, for a life bird, I have to SEE it, not just hear it, no matter how definitive the call. My rules. I read Phoebe Snetsinger's book, Birding on Borrowed Time, and she felt the same way.

I agree with you.

You are definitely in Spring birding nirvana. Honest to goodness? The blackbird was riding the hawk?!

The requirement thing? When I began birding I cheated a lot. I just wanted those birds sooo bad. Today, I'm much more discerning and consequently - much more honest:0)

Cathy-I've seen birds chase hawks but this one was attatched for 100 yard ride!

I think seeing a bird or even hearing it (if that is the way to identify them) counts as being a lifer! Great list you have and the upland would have been a lifer for me also!

-I have no problem checking off a bird that I have heard on a checklist.-

If it is to go on my life list I want to have seen it as well or I don't feel I've had the full experience.-

If it was a rare bird that I have heard, I might put an H for heard on the list but would still hope to eventually see it.

Wow Larry, what a very wonderful day you had!