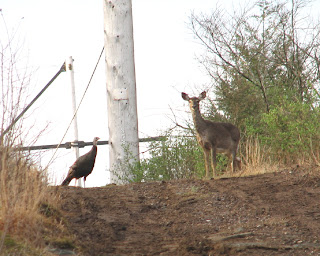 I started birding at 6am today. It seems to me, getting an early start usually pays dividends. My plan for today was to survey some of my favorite local birding spots (at least the ones that weren't flooded).

My first stop was the Old Marlboro Turnpike Power Lines. It was about this time that I had seen Prairie Warblers there last year. Unfortunately, there were no Prairie Warblers today. I was surprised when I saw a WHITE-TAILED DEER and a WILD TURKEY at the top of the hill. They seemed to be having a private conference.

There was also about 6 or so EASTERN TOWHEES singing- drink your tea-. I was fooled by one towhee that was calling out a single note. It was raspy sounding, so I thought it might be a Tanager.

After leaving the power lines, I drove a short way up the road to The Portland Reservoir.
The first thing I noticed was the CHIPPING SPARROWS. There was so many of them that I was hesitant to open my mouth in fear that one might fly in. I took a walk along the reservoir enjoying views of BELTED KINGFISHERS, BALTIMORE ORIOLES, and TREE SWALLOWS along the way.

At the end of the reservoir, there is a stand of pines on the left. It was here that I heard the little tin horn call of the Red-Breasted Nuthatch. I spotted the bird picking at a stump on the ground, but it flew further in to the woods before I took a picture. In this same area, there was a BLUE-HEADED VIREO, PINE WARBLERS, and BLACK-THROATED GREEN WARBLERS. The BT-Green has an easy to remember song which can be found here. 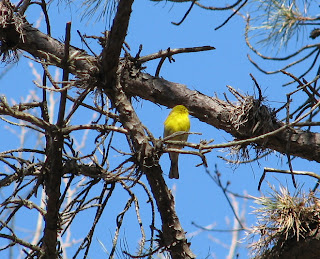 My last stop of the day was at the Portland Riverfront Trail. As I passed by the flooded field, I noticed some water birds on the far end. They looked very strange to me through the binoculars. I had forgotten to take my field guide, so I started to make primitive sketches. I took a photo that could be used for i.d. purposes. I recognized one of the birds as an AMERICAN WIGEON.

I moved a few feet up the path and saw my first BLACK AND WHITE WARBLER of the year. There was another warbler in the area that was making a strange buzzy song that was unfamiliar to me. It was similar in tone to a Blue-Winged Warbler's bee-buzz song, but the notes had a totally different pattern. I could not get a good look at this bird, and it was driving me crazy. I followed it for 30 minutes before finally, it showed itself. What was it?
It was a BLUE-WINGED WARBLER of course! I wasn't aware they had an alternate song. Not once did it bee-buzz me. Where was this bird's consideration?

When I returned home, I searched my field guides to determine the identity of the water birds I had seen earlier. It turns out they were BLUE-WINGED TEAL. I had never seen them before, and they did not look the way that I had envisioned them. I have seen Green-winged Teal which seem to match their name in appearance. Today was one of those days that I learned a few things.

1)Do you remember being excited about figuring out a new species or learning one of its songs?
2)-Can you think of a caption for the Deer and Turkey Photo?

Getting up early is the best way to go birding! So many great birds you had and can't wait to soon find some of those you located!

What this does make me realize is that I have to get out of my own backyard and visit some places! What a lovely day Larry.

Caption: Wow, a binocular-wielding biped. Is that a new species for you?

I'm sure I've had birding revelations; just can't think of any right now. Mostly it's just being pleased when I make an ID on my own, like my first-of-year red eyed vireo yesterday.

A great day of birding, Larry. Thanks for sharing it.

"He looks pretty scrawny, I think we can take him." (Sorry Larry)
Vern

Revelations birding? I am often overwhelmed with the feeling that nature is so vast and complex and that makes me feel small. Very humbling.

Betsy True gets my vote - though Hey! we're all pretty clever :0D

I have to think about the revelation thing.

I think I just got my first spam-(other than the kind from a can).
I like the creative captions y'all came up with.

PA birder-If you saw what I looked like you would laught at your caption. I'm a pretty big guy 6'1"
230.

Lynne-Thanks for tackling question one-I think taht I phrased the question poorly because I was lazy and tired.-I re-wrote it to more closely match what I was looking for.

Monarch-Even a birder as good as yourself would have a hard time locating the birds that I saw.-It would probably be easier just to find the same species(I know-what a wise-guy am I).

Cathy-They might have saying that because they just looked at me for the longest time it seemed.