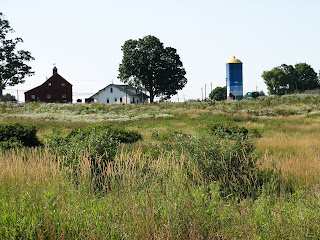 Every weekend, I try to come up with a specific game plan as to what type of birding I will do. On this particular Saturday, I decided to explore the farm fields in Granby CT area. I started later than I had planned (about 7am). I had played some poker at my parent's house the night before. Unfortunately for me, I couldn't stop winning. That's not good news if you plan on quitting early. If I'm not well rested in the morning, excuses start to enter my mind -(It's too far, you're starting too late, you're wasting gas-and on and on). Do you ever fall in to this negativity syndrome? Anyway, I finally gave myself a kick and hit the road. 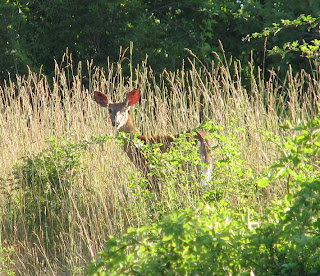 My first stop was Holcumb Farm in West Granby. Whenever I enter this field, I expect the theme to Little House On The Prairie To Start Playing.-hasn't happened yet though. I was hoping to see some Bobolinks and take a few pictures. I did see 3 Bobolinks but had no luck with getting a photo. I saw some other nice birds while I was here including Cedar Waxwings, Eastern Towhees, Eastern Phoebes, and Eastern Bluebirds. Have you ever seen a drunk Cedar Waxwing? A few years ago I came across Cedar Waxwings that seemed completely tame. They let me walk right up to them. I later found out that these birds can become intoxicated from eating too may berries. Too bad I didn't have a camera back then. There seems to have been Waxwing prohibition ever since I've bought my camera. I also heard one of the Empidonax Flycatchers. I got confused as to whether I heard a Fitz-bew or free-beer call. I'll have to go back and listen to their calls again. One other important note-Holcumb Farm had an electrical fence. I've always wanted to touch one to see how much of a shock you get. I'm just curious.- Have you ever touched an electrical fence? How much of a shock do you get? 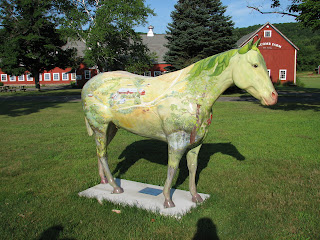 Granby had an event called the painted horse parade this year. Local artists painted scenes on horse statues which were displayed around town. Apparently, some of the horses didn't know the parade was over, because they never went home. Does this type of event take place in your region? 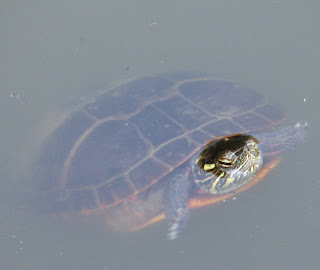 After making a stop at East Granby Farm-(Nice views of Killdeer, Swallows, and a Wood Duck), I ended up at Northwest Park in Windsor. I didn't spend much time there because it was a bit crowded with joggers, soccer teams, and people walking their dogs. This turtle came over to say hello to me.-What kind of turtle is it? 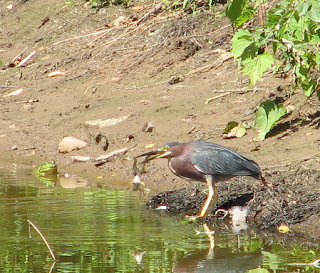 My best view of the day was probably of this Green Heron. This bird is not uncommon in Connecticut, but I don't see them all that often. The whole scale of common, uncommon, and rare doesn't match what I see anyway. I commonly see some uncommon birds, and rarely see some birds that are considered common. Wasn't it nice of this Heron to help the frog back in to the pond?
Posted by Larry at 9:49:00 PM

The horse photo and the Heron photo can be clicked to enlarge.-others can't. Why does this happen? -Do you need to reduce the size of the photos before posting them in order to make them clickable to enlarge?-thanks

Great photos! Thanks for taking us along on this nature fieldtrip!

Oh, and as for the electric fence: I'm a farm girl. I can't tell you how many times I've been stung!

-I have found that when I crop or otherwise mess around with photos before I post them they can't be clicked to enlarge.
-Never touched an electric fence, but I have put my tongue on a 9 volt battery. ZING!! (maybe that explains things...)
-Never seen drunken birds, but I have seen drunken bees.
-Negativity syndrome? That's the story of my dieting life!
-St. Paul, the birthplace of Charles Schultz, has big statues all over of Charlie Brown, Lucy, Linus and the gang.
-Painted turtle I think.
-LOL! The green heron pic is great! I didn't notice the frog at first.

Larry, these are terrific photos.

I get into the negative syndrome, too. It does take a kick in the butt to get going.

I would NEVER touch an electric fence. We all know you are a live wire - you don't need to prove it.

Oh, I'd be in heaven to walk into a bar and see drunken birds hopped on over to see me. Just kidding. I'm sure they can OD on berries. I saw CWs acting wild and risky on berries before.

I had trouble with clickable photos using Blogger upload before. The first one was clickable but the others weren't and I don't remember why. I started using Flicker in January.

Thanks Patrice-Guess the shock couldn't have been that bad then.
Jayne-Heronare taught proper manners around these parts.
Lynne-i've tried the 9 volt too-not bad.-I'd like to see drunk bees-must make for interesting observation.(the guys who dressed up like bees on SNL were probably drunk).
Mary-you have a funny way with words gift.-Maybe some day I'll try that flicker thing.

I love the green heron--another bird I've never seen in the wild.

I really like your deer picture--they have the most amazing ears!

I am so into seeing the bobolinks for sure! And those phoebes . . . . they are just not around as much as in previous years! I love your Green Heron shot!

Ruthiej-they do have pretty cool ears.-Green Herons are interesting to watch-they're kind of sneaky.
Monarch-I seemed to have noticed less Phoebes this year-although I was seeing them as late as December last year.

I guess it just goes with being a human being, Larry. But you did exactly the right thing - keep moving. The older I get the more important that gets - keep moving.

Ohhh. I want to see bobolinks so badly. It's been a couple years. I need to get into Amish country where there's a better chance.

Touch an electric fence? I'm such a chicken I'm careful when plugging in a lamp,

The heron picture: Riighhht. 'helping him back into the pond.' You're a hoot.

Cathy-I actually did get shocked from an electric lamp once-and I didn't like it.
Life is about foging ahead at times-we don't always have as much energy and enthusiasm as we would like.
No-really!-The Heron was helping Froggie back in to the pond-but then he changed his mind and ate him-I've got that photo too.

I absolutely love your photos! great to see a local blog. If you get a chance, visit my new blog. It's http://whatsnewaroundgranby.blogspot.com

Your comments and contributions are welcome!