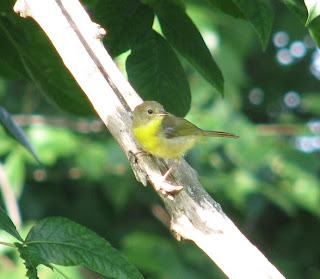 I decided to see if anything was new over at one of my favorite local birding spots-Wangunk Meadows in Portland. Not many people bird at this location, but it can be pretty good at times. I believe the top photo is that of a Common Yellowthroat. I'm thinking it must be a young bird or maybe a female. The features are subtle, and don't seem to match the field guide completely. I actually wondered if it might be a Nashville Warbler, at first. I've never seen a Nashville Warbler. If you look closely, it has an eye ring and what appears to be a little patch of rusty brown on the head.-both features of a Nashville according to Sibleys. Probably just the lighting. The field marks on many of the birds seemed to be more subtle than usual today. 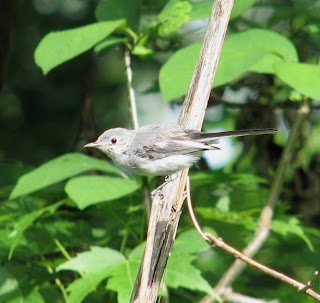 Here is a photo of a Blue-Gray Gnatcatcher. It was fluttering its wings while probing its beak in to a bush trying to catch bugs. Kinglets seem to have that same type of fluttering motion. These birds have a tail with a white boder on the outside edge. It is kind of difficult to see that from this photo. 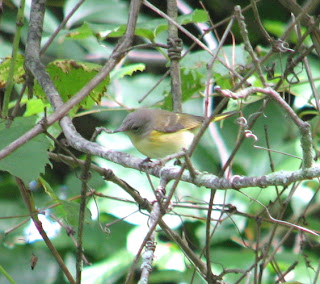 This is a young American Redstart featuring a grayish head, yellow on the sides, and yellow showing on the side of the tail in this photo. 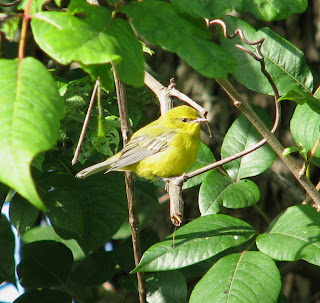 This is a Blue-winged Warbler. There was no bee-buzz sound today though. I think that they are fresh out of bee-buzz for the year. Fall migration is just around the corner.

I was fortunate to be able to get reasonably close to these tiny birds. They usually don't stay out in the open long enough to give me a chance to take their picture. Other times they stay within the foliage, and end up coming out blurry.

I also some other interesting birds. I spotted 4 Bobolinks mixed in with the 100's of Red-winged Blackbirds flocking in the main field. I saw a Solitary-Solitary Sandpiper picking through the mudflats along the river bank. There was a variety of Flycatchers: Eastern Phoebe, Eastern Wood-Pewee, Cedar Waxwings, Eastern Kingbird, Black and White Warbler,Great-crested Flycatcher, and Empidonax Flycatchers. The Empidonax flycatchers are getting on my nerves a little bit. They're not giving me any clues by making some noise.

I like birding alone, but wish you could have a life-line like you get on one of those quiz shows. It would be nice if someone like Ken Kaufman or Julie Zickefoose would suddenly materialize to help with a difficult identifications.

A fellow blogger, who also reads my blog, recently sent me an e-mail. It suggested that the phrase- "novice birder" which I use in my heading, does not match my birding ability. I have been birding every weekend for about 4 years now. If I were to talk to a non-birder about birds, they would think that I'm very knowledgeable. When I am birding with an experienced birder, I am a novice who makes many mistakes. I don't own Leica binoculars or scopes. I've never been birding in Texas, South America, or any other any other exotic locale. I'm uncomfortable trying to identify many sparrows, shorebirds, and Warblers within my own state. I often seek second opinions on the identification of birds. Thanks , but I'll stick with the title novice birder for a few more years. What level would you classify yourself as a birder? What are your strong points and weak points? 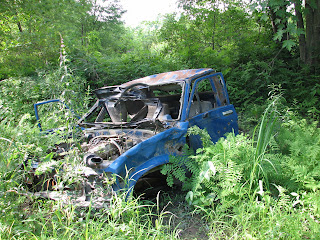 People have a habit of abandoning their cars at Wangunk Meadows. I've been looking for something that gets better gas mileage. This one has a few miles on it, but with some new tires and a fresh coat of paint, it should be as good as new.
Posted by Larry at 8:32:00 AM

Identifying warblers is a real challenge for me. They don't stay still long enough for me. You are an expert compared to me!
ruth

And-I'll bet you are an expert compared to a lot of people that you know!

Hey Larry - I love the way you ended this post - you had me laughing pretty good! I consider myself a backyard birder. And basically I consider many backyard birders novices when they get out in the field. It took me a while to distinguish between lesser goldfinches and American goldfinches a few years ago, but now I don't have that problem. So when it comes to my backyard birds, I could confidently (most of the time) be able to ID those birds. But put me out there in the woods or marshes, or even the ocean area, I would struggle to identify the birds. It's like the trip my husband and I took to northern California recently, and I had a tough time recognizing which raptors I saw. And the same goes for the shorebirds. Some of them look alike to me. ;-)

I love the warbler pictures!! I need to start hitting the trails and searching for some here.

Check the carfax on that truck..might say back country friendly truck!

Maryc-I would say the shorebirds are my weakest area-I just started to try identifying them last year.

Ron-I'm working on the car faz but can't make out the VIN.

I'm with mary c.. I am ok in my own backyard, but have never really ventured out and would feel very novice if I had to ID birds in the field. So, you ARE an expert compared to people like me! :c) Love the ride...lol.

Jayne-I don't think the word expert and me get along-If you knew about some of the bad calls I have made, you would not use the word expert.-Don't worry-there's plenty of other cars on the lot.

Hi Larry,
I think you're being too critical of your expertise. Getting out there every weekend is the best way to improve your birding skills. I spend lots of time listening to calls and trying to identify by sound which does help alot (as long as the birds are singing!) I've also learned the tip from other bloggers about getting a picture and then identifying once I've compared the picture with my field guides to pick out the distinguishing field marks. Warblers and sparrows ARE the most difficult (I think even expert birders will agree) because there are so many variations.

My binoculars cost less than $200 and so did my scope, I've never been to south Texas, Mexico, or anywhere else just to see birds, and I totally suck at shorebird & duck ID's (because I don't get enough opportunities to see them).

Maybe we should come up with some new definitions....I personally consider myself a "casual" birder (backyard and local area) vs. "hardcore" birder (driving hundreds of miles to see a rare bird or spending $$$$ on birding tours to distant locales)

Larry, your sense of humor cracks me UP!

Your photos are excellent, especially since they are difficult birds to catch. You have found some terrific spots to explore.

I don't consider you a novice! You know where to go, you have a network, and have found resources when you need information.

I don't have a scope and I have two pairs of binocs but neither are comfortable so I don't use them. I haven't even been to a birding event nor have I met a bird enthusiast (except for all of you). You have met a TRUE novice: me.

And I forgot to mention, there are some very experienced birders who still have trouble with raptors and sparrows. I'll never get it.

A new invention, the Hologram Ken Kaufman for birding help while on the trail! You could make a fortune. I love and hate birding alone. I love the solitude and peacefullness (and the rare opportunity to be alone) and yet birding with a few others can be so much more fulfilling.
Seeing a great bird without being able to share it with others is just not as good.
Those Empidonax Flycatchers (we call them all "Petey") can be so frustrating. If they don't call, forget it!
Great post!

Ruthie j-I'm like a level 2 Novice-
I've advanced in to the more challenging part of birding but I'm a beginner in that stage-Oh what does it really matter anyway-just something to post about I guess.-You Sounds like someone I would like to go birding with though.

Mary-Glad you have a good sense of humour-O.k.-Your a level 1 novice and I'm a level 2 novice-how's that?
Veery-Sounds like you and I share similar opinions about birding alone-thanks for the comments.

Larry, I have major warbler envy. Your pictures are fabulous!! I too don't think you give your birding skills enough credit. Me, I consider myself mostly a backyard birder.

"I'm uncomfortable trying to identify many sparrows, shorebirds, and Warblers within my own state. I often seek second opinions on the identification of birds."

Novice and experienced birders alike have their troubles identifying these birds. Just is that some will not admit it.

I have also witnessed plenty of experienced birders discussing what they saw and arguing about the ID. Include yours truly as being guilty of this one.

Love life, love birds and go about it the best way you see fit.

So I am reading along, enjoying your post, loving the pics AND THEN--the abandoned car. Both sad & funny.

John-Thanks-Sounds like good advice!
Monarch-thanks-I think that's the first bravo I've had this year!
kgmom-Sorry for the sudden shock-Some times I can't help myself.

Larry - I'm so behind on my blogging - thanks for dropping by mine and reassuring me that I'm still around;0)

Geeze. You've had some great birds this summer. Nice pictures.