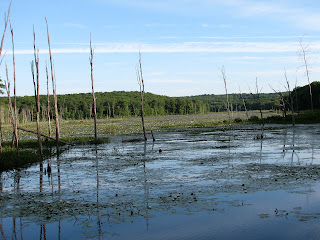 Saturday morning, I decided to explore a couple of locations in East Hampton, Connecticut. It was a cool, clear, sunny morning. I decided to make my first stop at Pine Brook Bog. I think
the main reason I occasionally visit this spot, is because I like the scenery. There's something about bogs that make feel like I'm looking back in time. I don't usually see a large variety of birds here. On this morning, I enjoyed nice views of Wood Ducks and Great Blue Herons feeding along the shallow edges. I only stayed for a few minutes before moving on to the next location. 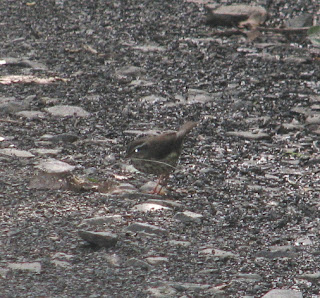 Next, I decided to walk along a portion of the Air line Rail Trail . I started at the Cranberry Bog entrance, and ended up at the Lyman Viaduct. I didn't walk more than 100 feet down the trail before I was rewarded with a great view of a Waterthrush with a bit of nesting material in its mouth.I would have liked to attempt a better photo, but didn't want to bother the bird. I was left with a question to answer-which Waterthrush is it-Louisiana or Northern? This bird seemed to be near slow moving water which is supposedly preferred by the Northern Waterthrush. Looking at this bird, the eye stripe seems to get wider and whiter behind the eye. It also seems to have pinkish legs and a fairly large bill. These are indicators pointing towards a Louisiana Waterthrush according to Bill Thompson III's book "Identify Yourself." I think I'm leaning toward the Louisiana.-What do you think? Either way it's a lot of fun doing a bit of birding detective work. 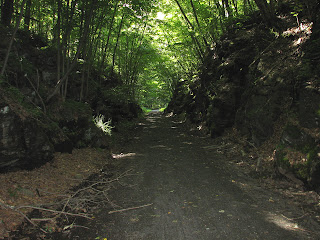 I walked further down the trail and entered a cool dark area that cuts through rock ledges. Water slowly trickles down the rock walls. I find this sound to be very soothing. I stood still just to listen and relax for a few minutes. Do you enjoy the sound of trickling water? 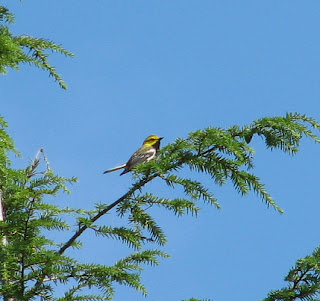 Along the way, I heard the keeyuur keyuur call of the Red-Shouldered Hawk but never did actually see the bird. There was a the sudden flash of a Pileated Woodpecker flying across the trail. The view was brief but unmistakable. I heard a loud PIK sound coming from a tree on my left. After careful searching, I was able to get a brief but clear glimpse of a Hairy Woodpecker. I heard the song of the Wood Thrush. The bird was in a ravine which seemed to amplify the song and create a beautiful echoing effect. My last memorable view was that of the Black-throated Green Warbler pictured above. The photo was taken from a distance, but you can clearly see the field marks. So often I hear the zee zee zee zee zo zeet song of this bird but rarely get a good look at this bird. I was fortunate to have such a nice view of one on this day. 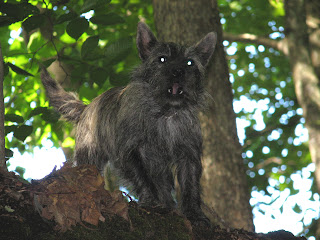 On the way out, I came across a couple of dogs. I called this one Toto. He seemed to pop up out of the woods from nowhere. Apparently, I was getting a little too close to his property boundary. 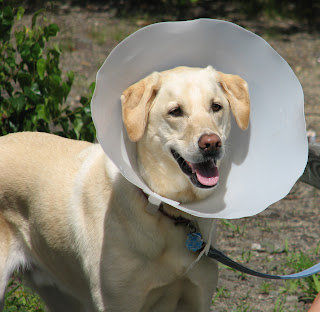 This dog recently had stitches and is wearing the cone so it doesn't take them out. When I see a dog wearing these, it reminds me of the old RCA Victor records which featured a picture of a dog sitting next to a Victrola. In this case, it looks like the dog got his head stuck in a Victrola.

I had to work to see the birds today. I would catch a little bit of a song, and then search carefully to catch a glimpse of the songster. I would often catch only brief glimpses, making it a challenge to make an identification. I liked it that way for a change. Some times, less is more. It's reminds me of a good book or movie that builds suspense. I don't always need to see everything in full view. A brief sound or glimpse helps to build a sense of curiosity.

It was not just the birding that I enjoyed. As I walked along the former train tracks, I wondered about the people who traveled through here in the past. The numerous stone walls winding through the dark woods added to the mystery. When walking old trails, do you ever think about the people who may have walked the same steps before you?

Larry, You have a writer's gift for capturing moments and detail. It's truly a pleasure to read your entries. And yes, I do wonder about people who may have walked before me--that's a great starting point for a story, you know.

It is more challenging to see birds in the summer, but you had a very successful day by my standards. Your warbler picture is great.
ruth

Sounds like you had a peaceful walk. Great shot of the warbler. Thanks for sharing.

Larry - Beautiful pic of the Black-Throated Green. One of my favorite warblers.

I'm impressed that you even try to see the birds. I usually just hear their songs, say their names to myself and continue walking. Guess I've been too frustrated too many times looking and it just makes a crook in my neck...

I, too, often wonder about the people who have been here before. Once, seemingly in the middle of NOWHERE, I came upon some myrtle... in the woods?? As I walked, I found the foundation of an old house. Hm....

Patrice-thanks for the compliment-If only I had the writer's gift of writing-then I'd be all set.

Ruth-It is more challenging but I think being challenged can be a positive thing.

Warren-Thanks-As a photographer(which I'm not)-that pic would be deleted immediately because it's too distant-
-As a birder-It's a keeper, because I don't often get good views of BT-Greens.

Jennifer-I'm always fascinated by the history of the land that I walk on.-I've worked on changing my viewing posture to avoid those crooks in the neck-Also,the place I went to was elevated to be nearly level with the treetops in some locations.

Thanks. This post is very good, Larry. I felt like I was with you on this tour. Water dripping down the rock is definitely something to stop and take in. I am amazed how keen my senses are since I've been nature hiking. You do a good job.

I'll never forget the first time I saw a dog wearing the elizabethan collar and wondered, "What's the lamp shade all about?"

So many great birds and love the waterthrush and Black-throated Green Warbler's the best! Glad things went good!

Mary-They sure are funny looking-Nature hiking does definitely seem to sharpen your senses.
Monarch-thanks!-You see so much though,that it probably isn't much of a big deal to you.