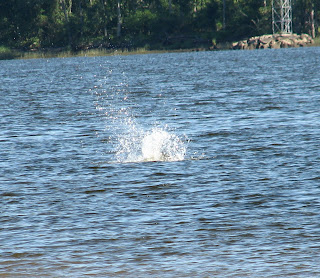 Last weekend, I stopped by a section of The Connecticut River in Chester. I thought of a story I heard about a Native American who used to fish this area long ago.-(1700's?)- I don't remember his real name , but it roughly translated to-"Seeker Of Fish."

He was seen by many, traveling along the river in his canoe. He was usually accompanied by his companion , a great white Osprey. The Osprey was described as being very white-(albino?)-and it would often perch on the front of his canoe. The two were known to share their fishing catches.

Children would often try to trick the "Indian." They would throw rocks near the canoe, making him think that fish were jumping in the water near him. Of course,it rarely worked. One day, this harmless game took a tragic turn. One of the rocks struck the fishermen on the head. He fell out of his canoe, and in to the depths of the river. He was never seen again.

Immediately after Seeker Of Fish fell in, the Osprey was seen plunging in to the water, where his friend had drowned. The Osprey never resurfaced. Over the years, there have been rumours of an all white Osprey in this same area. None have been confirmed.

On this particular day, I happened to catch a glimpse of an Osprey flying overhead. Was it whiter than normal ? (maybe just my imagination). Suddenly, the bird went in to a stoop, and plunged violently in to the water right before my eyes. It was exciting to watch, and I took several pictures.

Oddly enough, only one came out. It was the one above, of the big splash that it left behind. I never saw the bird come up. Maybe I just lost track of it. I searched the entire area, and there was no sign of the Osprey. I scanned the river one more time. As I looked in the area where the Osprey had taken his plunge, a single fish was floating on the surface of the water. ---a strange coincidence, or just failed photography?---hmmm.
Posted by Larry at 8:34:00 PM

I think it makes a great ghost story, or perhaps a legend to rival the Loch Ness Monster. Send your story to the National Inquirer. ;-)
I find the shutter delay on my camera just enough that I cannot catch moving birds.
Ruth

I think Seeker of Fish slipped you some of his peyote. :)

This is a terrific story Larry- a wonderful legend.

Never head about the "white" osprey but found this very interesting! I have not had good luck also with the diving Osprey! You did good with the splash!

Larry- I think you should think about submitting this story to Amy at Wildbird on the Fly. She runs a monthly contest called First Friday for bird related stories.

Larry, I could hear the Twilight Zone music playing in the background as I was reading this....
Very cool picture, BTW.

I love these old legends and think it's wonderful you had an experience that gave you a personal connection to the tale.

Enjoyed the story, Larry. I'm on a reading binge right now--and all written by and about Native Americans in Montana. They have a connectedness to our natural world that I truly envy. You inspire me. I'm planning a nature walk tomorrow and hope to report back with some photos for you! Take care,
Patrice

Monarch-You may want to consult with me before taking a trip to find the White Osprey.

Ruthiej-Twighlight Zone was one of my all time favorite programs-(origonal one only).

Mojoman-It's a lot easier to have a personal connection if develop one.

Larry, I loved this story and it put a smile on my face early this morning. When something exciting happens so fast, it causes some fumbling with the camera! The Osprey must have been doing some serious business.

I have problems with photographing Ospreys too............even though Jpanese ones aren't as spooky as yours..!