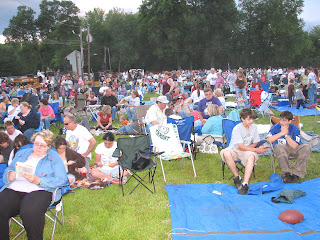 I thought that I'd take a brief intermission from blogging about birding. I'll get back to that on Monday night. Here are a few photos from Portland's Annual Fireworks display. It's one of the better ones in the state, even though Portland is a small town. 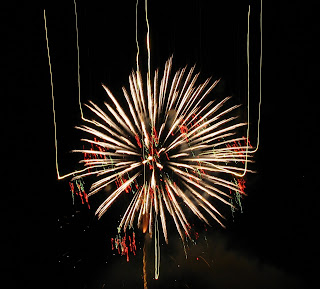 I didn't know if my camera would take pictures of fireworks but I thought I'd give it a try. It was a nice cool evening. This was a plus because it kept the mosquitoes to a minimum. The police were in full force checking coolers and cups for alcohol. I was drinking water, so I had nothing to worry about. Do you think proactive alcohol checks were a good thing, or an invasion of privacy? 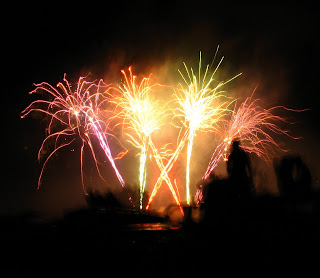 These are some of the ground displays. It Reminds me of a rock concert I went to back in the day. Does it remind you of anything? 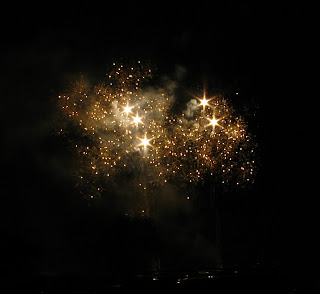 This looks like an image you might see through the Hubble Telescope. Billions upon billions of stars.-Who was the guy that always said that? 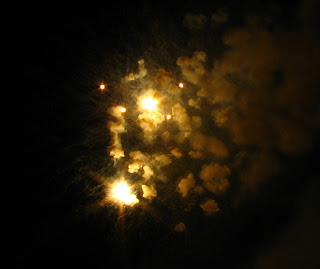 This reminds me a little bit of the Orion Nebula seen below the belt of Orion. 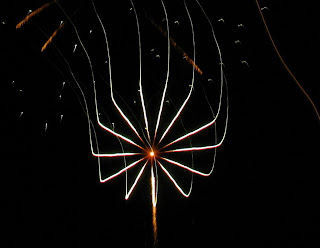 This reminds me of one of those glowing deep sea creatures you might see on Discovery . 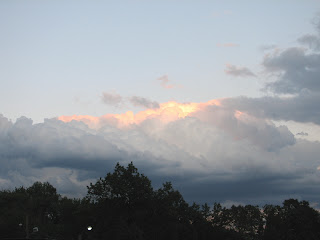 Some unexpected clouds showed up that led to a few showers. It wasn't enough to put a stop to this event which took many hours of hard work to set up. 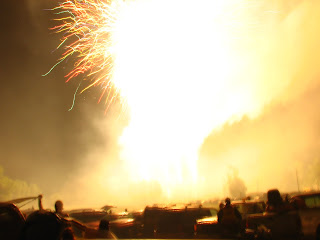 They ended the show with a tremendous flash of gunpowder. It took me an hour to get back home, even though I only live about 3 miles from the fairgrounds where it took place. All in all it was an enjoyable evening.
Posted by Larry at 6:30:00 PM

Very cool photos of fireworks. I agree with your ideas--glowing sea creatures or shots from the Hubble!

I am very impressed with your pictures. I have not been successful with fireworks displays.
ruth

ooo ooo I know I know!!! It was Carl Sagan. (I think I spelled his name correctly...)

I tried to get a fireworks photo over the weekend but it didn't work out. I think it's because I had to zoom at night and use the wrong setting. Yours are great!

I've never witnessed random alcohol checks like you described. I feel it's an invasion of privacy to check in that manner. However, if a police officer has reason to believe alcohol is present, it's OK. A check can also prevent fights or disorderly behavior - something to be avoided in a public gathering.

Excellent pixes,Larry! I love the sea creature look-alike and that last one reminds me of the fireworks years ago at Hyannis when they set the dunes aflame and you could see the firemen silhouetted against the light as they ran about dousing the fire.

I'm sure the police had to do their job which was crowd control. But I would also think it's an invasion of privacy; but then again - if you have nothing to hide, no problem! Look at all the security checks we have to endure when flying. Great pix, Larry.