What If Common Birds Were Rare? 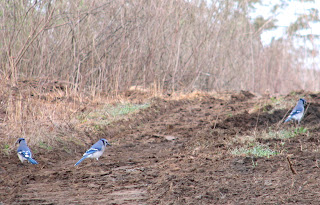 Chasing rare birds is a very popular aspect of birding. Some people will drop everything to drive or fly out to see a real rarity to add to their lists. No problem-to each his own. I went to see a few birds within the State of Connecticut that were on the CT. Rare bird report. Two of the birds I was able to see were female Buntings. One was a PAINTED BUNTING, and the other a LAZULI BUNTING. I understand the thrill of tracking down and getting to see a rare bird.

Now here is something that I was thinking about. The Buntings I saw were both a bit drab in appearance and behavior. Both were feeding on the ground, and went about their business without exhibiting any unusual behavior. The field marks on both birds were very subtle, and their colors were somewhat plain. Despite these facts, I was still thrilled to be able to find them.

What if a Blue Jay was a rare bird that had never been seen in Connecticut? I'm using a Blue Jay as an example, but it could be a number of other common birds. Forget about the Blue Jay's negative reputation for a moment. Suppose you went to find a Blue Jay that was listed on the rare bird report. Would you be disappointed if you were seeing it for the first time? Or-Would you be excited to hear the odd vocalizations. Would you find the markings of the Blue Jay to be dull?-their behavior boring?
Think about some of the other common birds that we take for granted. Which of those birds would you be excited to see for the first time, if it was a rare bird?-(sadly this may become a reality some day). Why are some birders so driven to find new and rare birds? How do you think this entertaining obsession relates to the natural tendencies of man?
Posted by Larry at 8:35:00 PM

I am not a big chaser but I do enjoying a few cool birds that are out their! But then again, one person's rare birds might be another person's common bird!

Maybe it's about wanting what we can't have or is difficult to obtain. There seems to be something in a lot of us like that. You know the grass is greener, the bird is better on the other side kind of thing. I happen to love Blue Jays so I'm glad they are not rare, but it gives me a laugh to think about people driving for hours just to get a look at a House Sparrow or European Starling.Last summer I spent hours over several visits trying to confirm Dickcissels nesting here locally in PA. In the midwest they are a dime a dozen. Here it was the 1st confirmed of now only 2 in the PA Breeding Bird Atlas that's being conducted.
Vern

Like Vern said, it's probably got more to do with feeling like you saw something special? But again, that is in the the eye of the seer I suppose. We do tend to take so many species for granted. I thought about this when I was looking for that Summer Tanager to come back. A brilliantly red bird flew up in the tree and I sighed, "It's only a cardinal." Yet, he was so very beautiful. I'd be very sad if he were not common any longer.

Hi Larry,
Your post gives us something to think about.... A few years ago when all the Great Grey Owls were in Minnesota. I made several trips up north to see them, mainly because they were in Minnesota and this was an event that would probably never occur again in my lifetime. I also went with some friends once to SW MN to see the Blue Grosbeak (only place they're seen in MN).
There are so many interesting birds right here in SE MN and I still enjoy seeing them each day. Once last winter I had 8 bluejays on my deck--at one time! Like Pa-Birder, I really like bluejays....they're easy to identify (colorful, loud & proud), and I know I would be excited to see one if it was rare.
I'm not much into record-keeping and don't feel compelled to write down birds on a life list (which I would probably lose anyway). I'm happy there are some obsessed birders out there or we wouldn't know about the Ivory-Billed Woodpecker. I've been with some of these birders who are dedicated to finding something rare. They spend so much time trying to see 1 bird that they lose all their time for seeing other birds. I'm not dedicated enough and don't have enough free time (or money) to pursue rare birds.
As humans, most of us have an intense interest in something (computers, birds, mountain climbing, quilting, etc.) and I think if we really enjoy it, we try to derive as much as we can from the total experience.

I've found that birds I take for granted, like cardinals, are not common for people from other areas, and it always makes me look at them with new eyes. I think there is a difference between being a lister and a birder, and I want to be a birder--not just to have a bunch of checks on the checklist, but to KNOW the birds I see. This morning, not much was going on in my yard, although I did see the house wren again, so I took the time to watch an adult and a young robin "grazing" together and looking at the differences--the speckled breast, the dark cheek spot, the dark beak vs yellow beak on the robin. It gave me as much pleasure to note those differences as a new life bird would have done.

This is a question I've given thought to before and it's a great one. I only recently started keeping a life list because I wanted just to be able to study further the birds I'd seen. I couldn't tell you what my life list number is though, because it's not that important to me. Like RuthieJ, I made a trip to northern Minnesota during the irruption year to see the GGO's, not so much to check them off a list (didn't have one then) but because they are so very beautiful. I am a backyard birder first and foremost and watching birds be birds is what floats my boat. I call the common yard birds "my regulars" and I enjoy watching and learning about their behavior.

What an interesting question, Larry. We have a few blue jays in our neighborhood and despite their reputations I'm always happy to see them coming after their share of the peanuts on my feeders.

Like Lynne and Ruthij - I'm not much of a lister - though if something rare were to pop up within a reasonable driving distance - I might try to go after it. Yes. I suppose there's something in us that enjoys the chase - that ah ha! moment when our technique and effort come together in that moment when a first-ever set of feathers comes into focus. Perhaps it's some vestigial drive from our hunter-gather ancestors.

(You saw a Painted and Lazuli Bunting?! Cool!)

OH my gosh... when I went to Colorado a few years back, I was absolutely entranced by the magpies, which it turns out are common as can be. And in Texas, the Green Jays! So beautiful... and plentiful. I know what you mean. We need to appreciate the common. I am wowed by the Northern Cardinal and the Tufted Titmouse.

This ia a great question, Larry. Although I'm new at birding, I don't think I'd scamper around the region to see a rare bird. I'm very content with watching the common birds I see do what they do. I enjoy watching Bluebirds and Doves bathe in my pond. I do squeal with delight when I see a lifer but I also squeal when I see a common bird in its natural state and how they live and socialize.

I don't even have a list of birds I've seen but I've been thinking about it lately.

Tom-That is true-I've some times said -I wish I could see a ---and get a response like-there's loads of those in Texas.

Vern-I think that's part of it-getting that which is hard to obtain.-Finding rare nesting birds is a little more interesting to me.

Jayne-We do take species for granted, and I try to remind myself of that while watching

Betsy-I like to do more than just check birds but I don't think there's anything wrong with doing that if it's your thing.

Lynne-it's nice that you are able to appreciate birds as they are.

I'm happy to see most any birds - and bluejays are a favorite!

There's something disingenuous to me about chasing down a rare bird just to add it to a life list - I guess maybe just that I appreciate any that I find and ID on my own.

Cathy-I will drive to see a bird that interests me.I drove an hour and a half to see a White-winged Crossbill because I was curious.-It was at a great birding spot though, and I saw lots of other great birds while I was there.-Hunter Gatherer?-Interesting-One female birder that I talked to felt that men chasing birds goes back to a need for conquest.

Jennifer-Those sound like birds that I'd like to see.-You study a wide range of stuff-that should keep you to busy to get bored with what you see.

Mary-I stuck with just birds that were in my backyard as did lots of birders.-You never know Mary-you may become curious about new birds that show up and want to go see one some day.-I had one of the most enjoyable experiences watching a Swallow-tailed Kite hunt on the wing for about an hour.-The bird was only about 45 minutes away from me-well worth it.

Laura-I can understand your feelings about the lifelist-I don't care much about it myself, but I do keep one.-I wonder what I'll be doing in terms of birding 10 years from now though-My feelings might change-who knows?

I think it is more fun to see a bird in its own habitat, especially if you can travel there (road trip!) but it is very exciting to see a rare species outside of its range as well.

Hi Larry,
You're right about birdchasers being skilled birders. I had a clay-colored sparrow at my feeders this past Jan-Feb. While not a rare bird, it is rare in MN in winter. A couple of local expert birders came over to help me identify it. They spent over an hour observing and finally determined it was indeed a clay-colored sparrow. They knew every field mark to look for that would positively identify this bird. It was neat to know I had an unusual bird and really great that these guys would take time out of their day to come over & help me identify (plus I made 2 new birding friends!)