Seeing Birds Through Someone Else's Eyes 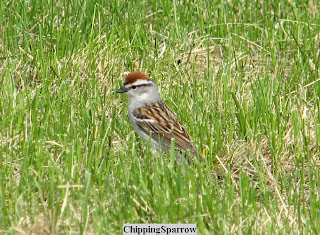 I went to one of the same locations that I visited last weekend.-Machimoudus Park. There was one big difference between this visit and the previous visit. This time, I brought another birder with me so that I could introduce him to a one of my favorite birding spots.
Jim has been birding since 1995 but his time in the field has been limited due to his work. When he does have time to bird, he generally chooses an area that is already a proven hot spot.
He was willing to try the location that I suggested but his expectations were low. He was stunned at how good the birding was at the park we were at. He had never heard of it and reasoned that any good birding spot in Connecticut must be known by everyone.
Most of the birds that I saw this week were birds that I had already seen the previous week. It didn't seem that way though. Jim was so enthusiastic about what we were seeing, every bird seemed like a new species again. I was able to share with him some of the bird songs that I knew and we were able to track many of them down. It's harder to do this in a larger group because it takes time.
One bird that we were hearing quite a bit (buzzy insect trill)- was the Worm-eating Warbler. They tend to stay in the thick of the woods much of the time but we finally got a look at one.-A really good look. It was interesting to try to discern the trill of the Worm-eating Warbler from that of the Chipping Sparrows which have a more mechanical trill.
We both saw our first Orchard Orioles of the year- male and female. The
Eastern Wood-Peewee was another new bird for this week. They look a little like a Phoebe but they have a loud whistly pee-a-wee call. Eastern Kingbird, Great-crested Flycatcher, Blackpoll Warbler, and Rose-breasted Grosbeak were other nice finds.
Two other birds that we tracked down by sound were the Blue-winged Warbler(Bee-buzz) and the Prairie Warbler (ascending notes). The Prairie Warbler was a life bird for Jim. Let me tell you-this guy was excited when he saw this bird in full sunlight. Field guides don't do justice for this bird. It is bright yellow with dark-lined facial markings. I had seen this Warbler many times before, but seeing Jim's reaction made the whole trip worth while. 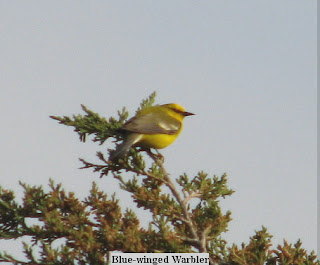 The final bird that I would like to mention is the Yellow-billed Cuckoo that I saw. I actually saw a Cuckoo yesterday but since it made no sound, I wasn't positive whether it was a Yellow-billed or a Black-billed Cuckoo. Today the Cuckoo did call out and I was able to compare it to my c.d' at home which made it clear that it was a Yellow-billed that I had heard.
This whole Cuckoo thing is driving me nuts. There are differences in field marks between the two, you don't always get a good view of them. A Juvenile Yellow-billed can have a black bill to make things even more confusing. I hope that I am able to see both of these species this year so that I can become better at identifying them. I am going to become more familiar with both of their vocalizations.-Now whose more cuckoo me or the bird?-Never mind-don't answer that.
Have you ever introduced someone to a new place that you liked and have it turn out well?
Have you ever experienced seeing birds through someone else's eyes?
Posted by Larry at 6:50:00 PM

I still don't have a Prairie Warbler this year. Was he singing?

You're right Larry - it's so nice to introduce someone to a great birding spot or a great bird.

At Magee Marsh this week I watched Kenn Kaufman assisting people who were working on life birds.

Doesn't get any better than this:0)

No, but I'd love to be introduced to an area like that Larry! How nice that you were able to share it with a friend and see it through his eyes. The more I read posts like yours, the more I am sure that I need to get out of my own backyard.

Such a great post and love how you were able to introduce a birding spot to someone else! I have many fave spots for birds and butterflies! I take many people to these locations!

Beautiful chipping sparrow shot, Larry. And it is definitely fun to introduce a favorite spot to a friend. AND I would love to go birding with Kenn Kaufmann! Kool!

Jayne,
I see myself as a backyard birder. I've just redefined what I see as my backyard. Maybe you would want to give that a try...And Larry, it is amazing how our favorite spots can come alive when we bring a set of new eyes to them. Enjoyed the post.
Vern

Cathy-He was singing. I find Ken Kaufman's views on things interesting.I wouldn't mind spending the day birding with him.

Jayne-join up with a bird club for a trip.-I'm sure you'd find it to be lots of fun.