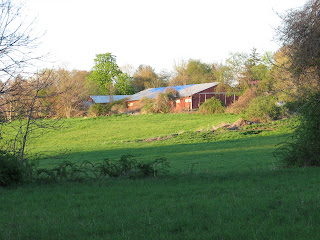 The afternoon was much different weather-wise than the morning had been. It was now 70 degrees and sunny. The strong wind had been replaced by a gentle breeze. I took a walk down to the Portland Riverfront Trail area. You will often hear me refer to this area , because I like to monitor local birding areas frequently. 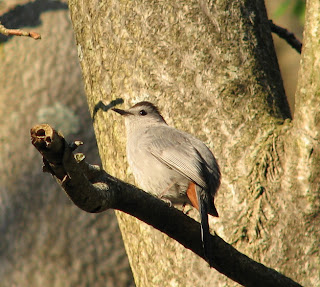 My first stop was at the field that had been flooded. I was curious to find out if the Thrashers had returned. I noticed right away that there were many Gray Catbirds in the area. Then, as I entered the field, a Brown Thrasher popped up on a tree branch. It started singing a series of songs, repeating each one twice. 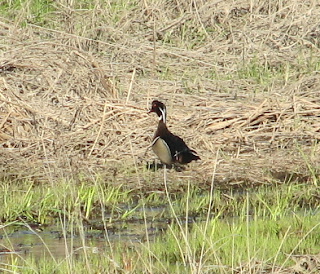 I slowly walked in to the field. Most of the water had receded but there was a small patch that was still flooded. I was pleased to see a few Wood Ducks walking in the marshy area. Wood Ducks do not pose for me. If I try to get too close, they are gone. 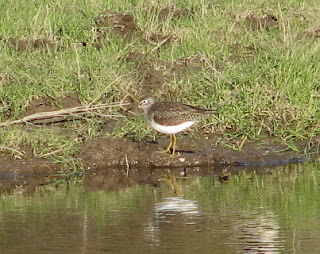 As I started to scan the field, I noticed this shorebird near the edge of the water. I don't know shorebirds well at all, but I did observe that this guy was wearing a snazzy pair of spectacles. 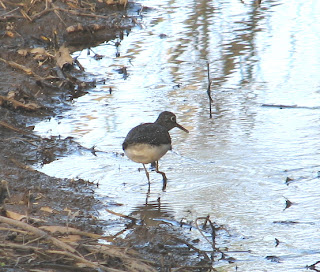 It later flew to this little brook near the entrance. I knew it was some kind of Sandpiper but was not sure which one. When I checked out Sibleys, it noted that Solitary Sandpipers have distinct eye rings and relatively short bills. A Solitary would be a lifer for me. I would appreciate it, if someone would confirm my i.d.

The Yellow Warblers have also returned to this area. I spotted about a dozen. They thrive in this habitat which is comprised of tangled thickets and vines. There were also good numbers of American Redstarts around.

By this point I was satisfied and decided to return home. Before going back, I decided to have a look at one more area people call Sleepy Hollow-or the Hollow. There weren't many birds there but here's a picture of me at Sleepy Hollow. Well, I think that about wraps up part 2.
Posted by Larry at 5:47:00 PM

Larry,
Congratulations on your lifer Solitary Sandpiper. Did you notice it making bobbing motions which they often do?
Vern

It did do a bit of bobbing-and thanks.

Definitely a solitary. The "spectacles", bill length, the willingness to get its feet wet, general shape--all fit "solitary." Congrats!

Betsy-thank you for that confident confirmation.

I took a picture on Monday of a very similar sandpiper. I couldn't see an eye ring though and determined it was likely a spotted sandpiper without spots because it was still in its winter plumage.
Ruth

So many great birds and really have not seen my shorebirds yet! They don't show up till fall! Great post !

Ruth-I guess becoming familiar with Sandpipers takes time and patience both of which I could use more of.
Tom-We get most of ours in fall too.-thanks.

Great Blog! I have yet to get Solitary as a yard bird. Good birding!

I was just looking up sandpipers as I saw one yesterday. I believe they are correct!

You are very observant, Larry. Great post and photos!

It's so nice when photos turn out this well and you've captured the good field characteristics.

How long is the Portland River Trail? - it looks like great habitat.

les-thanks-it's not quite a yard bird-more like a neighborhood bird.

Mary-Glad to see you're really getting in to the birding mode.

Cathy-It is only about 1/2 a mile of river frontage but it has some interesting features.

-At one end is The Brownstone quarries-the browstone slag was dumped along the river bank which created a big gulley that floods-the spot where the solitaty was is actually a private field that is at the end of the trail opposite the quarries.

-The owners do not mind birders.-It's very satisfying to find new birds at your local spots.

The bird I saw looks like your sandpiper. Can you hop over and give it a look? May 10 post. My range map says I shouldn't see one here.