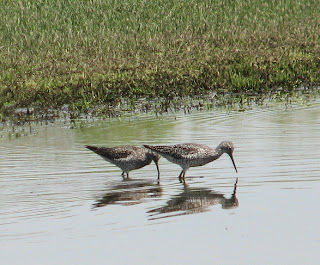 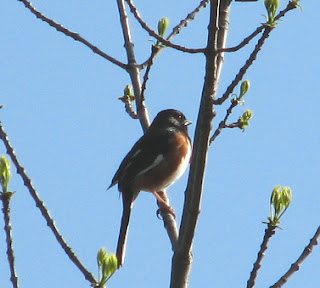 I attended The Quarry Park and Connecticut Flood Plain Field Trip with The Hartford Audubon this morning. There was a total of nine birders for this trip. I was not the only Larry on the trip.
The trip leader was also named Larry. This caused a bit of confusion , as you could imagine.

It reminded me of one particular annual fishing trip. I spent a week at a Maine fishing camp with a group of six guys . Five of them were named Larry. This made for a lot of humorous moments. Have you ever been in a similar situation?

The species total was 51 which is a fairly good number for any inland location in Connecticut (not that the numbers thing means much to me personally). Some of the highlights were:
WOOD DUCK, GREATER YELLOWLEGS, LESSER YELLOWLEGS, CHIMNEY SWIFT, BLUE-HEADED VIREO, OVENBIRD, AMERICAN REDSTART, BLACK-THROATED BLUE WARBLER, WOOD THRUSH,ROSE-BREASTED GROSBEAK, BALTIMORE ORIOLE, SAVANNAH SPARROW, BLUE-WINGED WARBLER, YELLOW WARBLER, PALM WARBLER, AND BELTED KINGFISHER.
We enjoyed especially good views of the WOOD THRUSH and ROSE-BREASTED GROSBEAK. 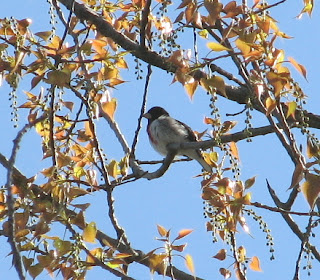 We enjoyed watching an AMERICAN ROBIN gathering nesting material. There was much debate over the identity of one bird. It had a buzzy song and was near the top of the tree. We felt it most closely matched the song of a NORTHERN PARULA, but the field marks didn't seem quite right. We also had some discussion about the identity of a shorebird that was seen on the banks of slow running stream. We didn't see it well enough to be sure. One birder felt it was a SPOTTED SANDPIPER, while another thought it to be a PECTORAL SANDPIPER noting the clear division across the breast of the bird. We concluded it was a sandpiper but left it at that. Fortunately, no one was hurt.

My birding skills are gradually starting to improve. I'm good at finding birds both by sight and sound. My identification skills vary depending on how familiar I am with the species.

I really don't like making a bad call when identifying a species. It feels like I'm in the "Want to get away?" commercial. Actually, I think it would be great if they made one of those commercials, featuring a birder making a misidentification. I suppose non-birders wouldn't see the humor in it.

If I'm not positive of what I'm looking at, I try to hedge my bet. Today,for example, I was fairly sure that I was looking at a BLACK-THROATED BLUE WARBLER. Instead of just calling it out, I took the cautious (cowardly) approach instead. I said something like-"I'm seeing a Warbler with a large patch of black under its throat like a BT-Blue would have". Shortly after that, a more experienced birder spotted and confirmed it.

Have you ever been embarrassed after making a misidentification? What kind of reaction did you get? 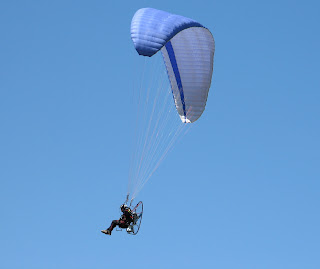 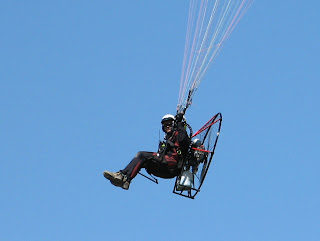 This guy must have been having a blast flying around on a day like today. Have you ever tried this? What's it called?

This is great. Regarding missing IDs: The only group of people I discuss birds with are people like you and my other bloggers. When I received my camera for Christmas, called a Junco a Chickadee and told everyone I have several Purple Finches at my feeders. I've made so many mistakes it isn't funny. Yes, I've been embarrassed but I just keep on... I'm getting better as time goes on.

I photographed a Rose-Breasted Grosbeak the other day! Most of the birds on your list above are foreign to me. You did good.

I'd rather *watch* a person fly like that and I don't know what it's called. I won't try to guess for fear I'd make a mistake :o)

I see a man in a flying machine with a big parasail and an engine-powered propeller that looks a lot like a powered paraglider...

One of my mistakes was reporting hearing a Cassin's Vireo in EARLY spring. Though, I did say 'maybe'..anyhow, Purple Finch can be a good mimick! Interesting subject..my view..just call em and if you get it wrong..oh well..I know sometimes it can be intimidating when in different company...but its a global problem! How sad...credibility is important but I always say "i will call em" but 10seconds later i may change my mind..Great subject...needs more discussion..cheers Larry..keep the good work going..One last thing..I met Kenn Kaufman 2 years ago at the meadowlark festival..his words..'stop worring about Short-billed vs Long-billed', just enjoy the birds'..cheers RM

Sounds like you had a good trip! It is great for me to learn some new birds from your post. About names... there were 4 Jims in my 7th grade class. Some names just cluster. But 5/6 guys called Larry is just too much!
ruth

Mary-Why not attend a field trip with your local birding club?-You might have fun.
Mojo-Was that you up there?
gone birding-I did exaggerate the post a bit. I am taking a few more chances on making the call.-On the short-billed long bird comment-I was just thinking last night-who really cares which one-
I'll just go with yellowlegs unless they are side by side.-There was about 10 yesterday and some were clearly smaller when next to the others.

OK, I called a Great Blue Heron...um... a Sandhill Crane? I can laugh now, but really felt like an idiot! LOL! We are all learning together. Sounds like you had a really productive, fun day Larry.

Larry,
The first time I had Caspian Terns I identified them as Royal Terns and was in no uncertain terms corrected. But if you take a look at a field guide you will find that the two aren't that easy to differentiate if you are inexperienced with them like I am.
Vern

Oh, Larry! That is so funny! I know exactly what you mean about blowing an ID. It makes me all sweaty just to remember those (ahem) 'few' really bad times :0) I do exactly what you do when I think I have something, but don't want to make an arse out of myself. I ask questions or I qualify my observations with "I think I'm seeing . . ."(then I list the characteristics like color, markings etc)

Honest to goodness? Were there really 5 other Larrys? What are the chances?!

Great pictures! As for that hang-glider or whatever fella - I'd rather be watching birds than trying to fly like one.

Fun commentary. Five Larries. Sounds like a Saturday Night Live skit. As for the wrong call, I've made many and am apt to hedge my bets, but I've heard both Pete Dunne and David Sibley talk about flagrantly misidentifying birds in a crowd. It happens. The only ones not misidentifying are the ones who aren't trying.

Spotted vs Solitary, I look for the eyeline (Spotted) vs eye-ring (Solitary); heavy bill, orange in breeding (Spotted) and tail bobbing (Spotted); more round (Spotted) more slender (Solitary) Also, the Spotted tend to be on the shore or on mud, where the Solitary will go into the water like a yellowlegs. If you think back about the bird you saw, this may help you decide. We have a lot of both in my local favorite birding spot.

This bird was hanging by a riverbank in the mud.-They were actually trying to decide between pectoral and spotted.-One person pointed to tail bobbing-the other about the clear division on the chest.-I would have had to see it more to decide-It was in a dark shaded area.

So many wonderful birds and a hand full that I have not seen this year! So glad you had such a wonderful day!

Oops, I must have solitary on the brain, as we have so many of them here right now! You said pectoral in your post. We don't get pectoral much, but the comment about the mark on the breast should have given me the clue. Duh!

The funny thing is-I origonally wrote Solitary in the post before you read it.-I caught my mistake and changed it to pectoral.

The next day I ended up seeing a Pectoral any way which is a lifer for me.

See, it was my psychic self reading the post, LOL! Congrats on the lifer pectoral!

Oops-meant to say solitary on the lifer-By the way-the story with the larrys is true.-Two seniors two Juniors and an independent Larry.