I checked The Old Marlborough Turnpike Power lines and Wangunk Meadows this morning, both of which are located in Portland. The Power lines had good numbers of

Prairie Warblers,(8), Blue-winged Warblers(6), as well as a few Chestnut-sided Warblers. All three of these Warbler species seem to like the habitat that is common in power line right- of- way -areas. If you have time, compare the songs of these three species. They are distinctly different. I really enjoy hearing the escalating song of the Prairie.

I took a brief walk through The Portland Fairgrounds and Wangunk Meadows. I was anticipating seeing some new Warblers. There were no new Warblers. I did get my first good look at a Common Yellowthroat. There is nothing common looking about them. One surprise was seeing the first Yellow-billed Cuckoo (probable) of the year. It was silent, and moving north from tree to tree along the river. 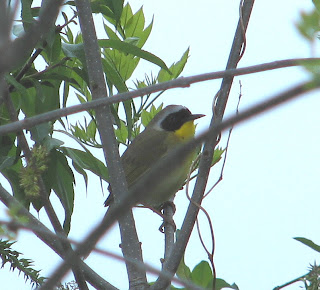 The other surprise was a large numbers of shorebirds around. I came across about 3 dozen shorebirds that were hanging around the various mud puddles. Funny how that works. I was expecting warblers and found shorebirds. That's one of the reasons that birding can be so interesting. You can't always plan what you are going to see.
The ones that I was able to identify included Yellowlegs, Least Sandpipers, Spotted Sandpiper, (least and spotted seen below), and a Solitary Sandpiper. I have a feeling that there may have been more which I wasn't able to identify. 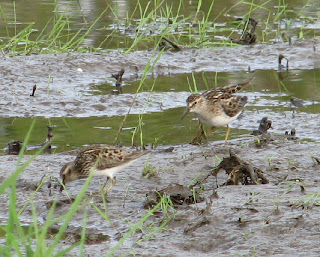 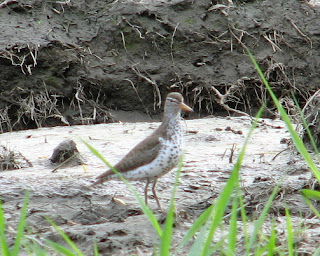 Wangunk Meadows is not the prettiest looking area. It is a collection of abandoned farm fields, marshes, streams and woods located along the Connecticut River in Portland and South Glastonbury. ATV's and 4-wheel drive vehicles are always driving though the muddy roads, making deep ruts. The picture below is of an isolated area that is home to abandoned vehicles. I don't know how these cars ended up there. Hunters like to take target practice on them. 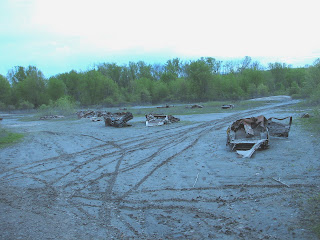 Despite the fact that the area has been abused, it still has a great variety of birds.
Posted by Larry at 11:31:00 AM

You warblers are really nice, I personally wouldn't mind a Prairie or two around here and the blue-wings are difficult to find on the migration hot spots, they seem to immediately disperse onto their breeding areas which are - of course - not frequented by birders that much!

Thanks for all your great comments on my blog, it really was about time I "wrote back" especially as your blog is really good!

May is a busy month, I say!
Cheers and good spring birding!

Thanks for checking in.
You have provided some excellent information about birding on your blog.