Carrying A Camera Provides Some Insurance

I'm still somewhat of a beginner when it comes to birding. One thing that always made me nervous while out birding, was that I was going to see something and not be able to identify it. This has happened to me several times over the past few years and can be a bit frustrating. I always start to think to myself-I wonder if I missed identifying a rare bird?

A couple of years ago, I decided to buy a camera so that I could get photos of any birds that were new to me. I have been able to identify several new birds this way that I was unable to make a positive i.d. on in the field. It is also nice to have pictures to back up your stories when telling someone about good birds you have seen. Every so often, you may come across someone that seems to have some doubt about one of your proclaimed sightings. A photo makes for nice evidence in these cases.

How and when to use the camera to take a photo of a new species varies. I think you have to take a really good look at the new bird through the binoculars, while you have the chance. I won't attempt taking a picture until I've memorized enough field marks to have a decent chance of making a positive identification.
What really works out well, is if you get the opportunity to further observe a bird after you've already secured a photographic record. They say it's a good idea to use the video mode if the bird is hard to capture on film.
Here are two bad photos. Try to identify them.-Both were life birds for me. 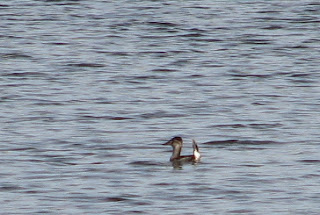 Photo number 1: I identified it without the photo but was glad to be able to confirm it later . 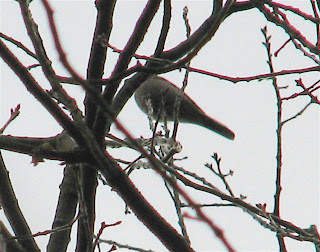 photo number 2: This was a bird that I went to track down, based on a rare bird report.
Has your camera ever helped you out with a species identification?
Posted by Larry at 5:42:00 PM

Hard to say without making bigger (new laptop makes everything smaller now)! The first one looks like a ruddy duck by the shape and tail (but is really just a guess). The second one, well not even going to give that one a try!

The second one was a grayish bird which had a white eye ring.-It was hanging around in an elevated area in Juniper and Mountain Laurel.

Nice pictures or should I say nice question! Hmmm...Ok...

No.1 long up-turned tail with white under tail coverts...small duck..dark on top of head, darker back, grayish neck and kinda dark line across cheek..my guess: RUDDY DUCK (female/juv..the only other duck that looks similar is Masked Duck.

No.2 This bird has a long tail, a bit smaller than a Robin, upright posture...this one is tough..hmmm..my guess is TOWNSEND'S SOLITAIRE..though with that light it could anything..

See! It's good to put your head on the block...Cheers...Rich Mooney

Oh! Oh! Oh! I promise I had 'em. Well, only after you gave the eye ring on the lower bird. Yea!

I used my camera today to record a birdsong which I will play tomorrow for my fellow-birders to help ID.

Monarch-You are correct with Ruddy Duck.
Rich-I am impressed-Townsend's Solitaire it is.-Didn't think anyone would guess this.
Cathy-I need to figure out how to upload such stuff.

I have to use my camera for ID-ing birds, as I have to look them up in a book. I have several pics of the undersides and backsides of birds that are impossible to identify.
Ruth

I love how you think! I am not very good with a camera but I like to take them. (my brother, Birdfreak is really good)
Sometimes, especially while birding solo, I like to call it "photo referencing" or "photo confirmation". Just to make sure, or to show other people...or even to remember what I saw over a long birding day when I returned home. The only problem I have? When I am taking pictures, I often forget to watch the bird!
--Veery (One of the Birdfreak Team)