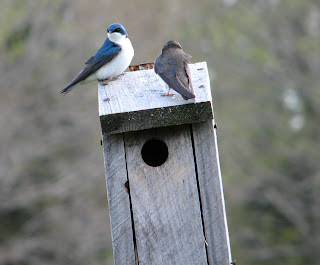 I started my Sunday by doing a little early morning birding at Machimoudus Park . It was cloudy, 50 degrees, and very windy. I was only able to spend an hour there, but still enjoyed the birds I was able to see. Tree Swallows were the dominant species this morning. It was quite a thrill to enter the park with a hundred swallows flying in every direction above my head. 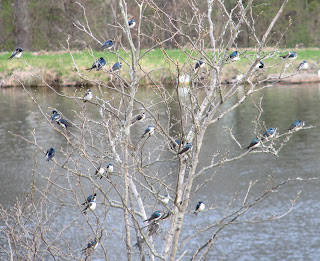 When they weren't putting on an air show, they would rest in trees, like the one above . 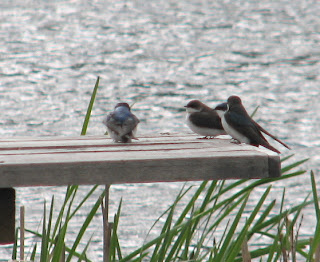 Some of them didn't want to be bothered with a crowd, so they reserved a private table. 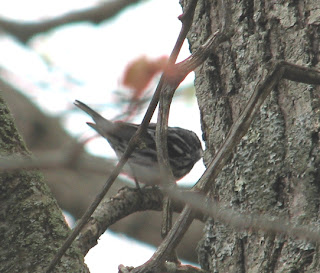 I had a chance to get a decent picture of this Black and White Warbler, but came up short.
In all, I saw eight species of Warbler: Blue-Winged, Black and White , Yellow Warbler, Prairie Warbler, Worm-eating Warbler, Yellow-rumped Warbler,
Northern Parula-(eye level view-very nice!), and Ovenbird.

Then it happened, I saw my first Scarlet Tanager of the year. The brilliant color of the breeding male Tanager seemed to momentarily make the clouds disappear. There was a time, when I thought that I would never get to see a Tanager. I was always looking up in the trees hoping to see one. Now that I know their song, they are much easier to find but no less striking.

I also caught a glimpse of some Common Ravens which were making some of their trademark Raven sounds. I saw lots of other species of birds but I prefer to just mention the highlights.

On the way out, I was hearing a bird song that sounded very familiar to me. I knew it wasn't a warbler but what was it? Just before exiting the park, my question was answered. It was the rather dull looking Warbling Vireo. The song was very familiar, but I hadn't heard it since last year. -That concludes the morning session-stay tuned for part two (The afternoon session)-on Tuesday.
Posted by Larry at 5:52:00 PM

Larry,
A lot of good birds in part one alone. I've been working hard for warblers though I did manange my first Magnolia on Sunday and a female Black-throated Blue. Have not have a Scarlet Tanager nor a Northern Parula either. Look forward to part 2.
Vern

Great post, Larry. I saw my first tree swallow over the weekend. You have wonderful photos and I wish I could have 1/2 of them you spottd on that tree!

That tree shot is great! I have seen two new birds this week...tree swallows anda spotted sandpiper. Not as exciting as your warblers and tanager. Please send a few north!
ruth

Vern-part 2 is below-maybe you can confirm the i.d. for me.

Mary-You can have half of them but its a long drive to Connecticut.

Ruth-You Warbler package will be arriving north via ups in 7-10 days.

Thanks Larry! I will mark my calendar and see how accurate you are. :-)
ruth

Not a bad day, even if the weather was less than ideal. Great photos! I saw my first scarlet tanager of the year on Saturday and it's hard to imagine a more exotic-looking bird in the oak forests of eastern Massachusetts.

WOW! Warbler heaven! What I wouldn't give to see a Tanager. Great day of birding!

O my goodness, just look at all those swallows in that tree! Wonderful shot and great birding day!

The Tree Swallow tree and table are so neat. What great birds.

You got a Prairie Warbler!? Lucky!

-I have very good luck with Prairie Warblers at power lines-Maybe I'll be lucky enough to capture a photo.