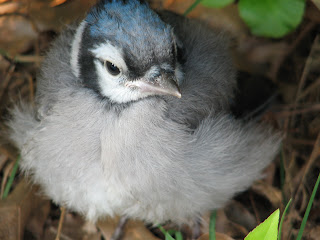 The above picture is a Blue Jay that was fresh out of the nest last week. The jay didn't seem to know what to do when I approached it with the camera. Later in the week, I observed it trying out the birdbath.It jumped in to the water then flew right back out several times over. It was funny to watch. 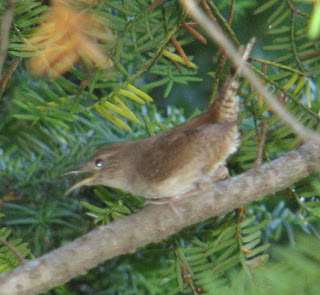 The House Wrens have been chattering for weeks out in the back yard. The eggs in the nest box finally hatched.I've been watching the wrens bring bits of food to their young ones. Once in a while, a House Sparrow will sit right on top of the nest box. The wrens don't seem to like this too much. 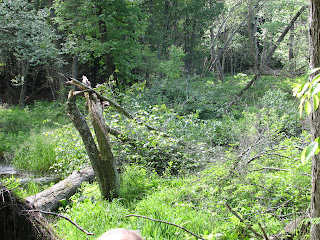 Last Saturday, I went on a field trip to Mclean Game Refuge in Granby. It's about 4,000 acres of preserved land. Much of the area is loaded with big pine trees. It is a great area to visit in the summer, because the pines keep the area cool, dark, and light on the bugs.

Here are a couple of highlights from that trip: First of all, the trip leader was really excellent(Paul Cianfiglione). He can pick up birds equally well through sight or sound-(I some times wonder if he smells them too).

We had a lot of fun watching a Hairy Woodpecker encroach upon the nesting area of a pair of Great-crested Flycatchers. The Woodpecker seemed to have tunnel vision. It was pecking its way through a tree looking for bugs. The Flycatchers were making a lot of noise and swooping down near the woodpecker. The Hairy seemed totally unfazed. It just kept Pecking away. We watched the three of them for about ten minutes.-Lot of fun to watch. Later, we saw a Pileated Woodpecker Flying across the path.

Another thing that stood out was an almost sighting of a Winter Wren. Someone played back the song of the Winter Wren a couple of times. The wren came out to challenge the recording to a sing-off. Instead of staying low as these birds almost always do, it perched fifty feet up in the top of a tree to sing. We never saw it.-Beautiful song though. We also heard a Hermit Thrush singing deep in the woods. I was able to get some really nice views of waterthrushes. The first one was a very young bird. We were unable to make a definitive identification as to whether it was a Northern or a Louisiana Waterthrush. Further down the trail, we were able to get a nice view of a Northern Waterthrush.

NEW BLOG
A new birding blog I've been reading is called:
Birding North Central Massachusetts...And Beyond by Tom Pirro. Tom has been birding for about 20 years. He concentrates on birding mostly in his local area, and seems to do a thorough job of it. If you like birding, you should take a look.

TRYING TO KEEP UP
I haven't been reading the blogs that I enjoy as much as I would like to. I've been working two jobs. Every weekday starts at 7am, and I often don't get home until 9pm (except tgif). There are times, I don't have enough left in my tank to blog, read, reply, and comment on my favorite blogs. I will do the best I can to catch up on weekends though.

QUICK SUMMARY OF WHAT I'VE BEEN SEEING LOCALLY

One other note-I saw an AMERICAN KESTREL hovering in a patch of field near exit 33 as I was heading south on 91.

My neighbor, Bob, reported a European Starling with an all white tail. It must have been a partial albino, or someone forgot to empty the bleach out of their birdbath.

O.K.,-that's all I've got for today. Hopefully, I'll be able to read some blogs later tonight or tomorrow. Enjoy your weekend!

Larry - Sounds like you do have a full plate. Still, you're managing to pursue this most wonderful hobby. The Blue Jay pix is wonderful.

I read that new blog you found and it is really good. The first post I saw was a Loon with a baby on its back! How neat is that?

The baby blue jay sure is cute. But when they grow up, they are such obnoxious birds.

Hi Larry,
You must be exhausted. I'm not going to complain about my job anymore!

I love Bluejays and that baby one is too cute. I don't have any little ones showing up at the feeders yet, but hopefully it won't be long before their parents show them where the peanuts are (on my deck).

Hope you have a restful weekend.

Don't you hate it when work gets in the way of important things like birding?

Cathy-Looking forward to my hobbies is one of the things that keeps me going during the week.
Veery-Glad you liked it.Tom seems like he's really in to birding.
kgmom-This little one was so timid that it was amazing to think he would turn in to a big brash jay.
Ruthiej-I think I'll survive, but I wanted to point out that it's a little tough to keep up with blogs on weekdays.
Corey-Yes!-that sums it up.-I've never minded the act o working,I just don't like the control it can have over your life.

I must be tired-I noticed that I wrote Eastern Kingfisher instead of Belted Kingfisher.-

Don't work yourself too hard. Work is good, but life is meant to be enjoyed a bit, too.

It is a good thing you have a good hobby to help you unwind, or you will end up a casualty! Enjoy your weekend.
Ruth

Jennifer-Believe me-I'm not working this hard because I feel like it-I'll take enjoyment of life over work any time.
Ruth-We never get out of this world alive-I'd rather it be later than sooner though.

Hi Larry! You are seeing so much and networking - I admire your tenacity. Keep up the effort - I know you are enjoying yourself.

You are not alone with the working and blogging dilemma. You must be exhausted. The heat is exhausting us down here and I can barely keep up with my own blog. I'm trying to catch up with everyone this weekend - I love seeing what you and everyone are doing... Obviously, you are quite busy :o)

Have fun and keep us updated.

Wow Larry, that *is* a good bit to have on your plate. Very long days. I don't see how you do it either. I love reading your stories of all the sightings you have, and will stop whining about my four day work weeks!

No worries, we are all busy this time of the year! I just love your Blue Jay photo!! Soo cute for sure! Looks like you had a great time with great birds! keep up the great work!

Tom-The Blue Jay photo is almost like one of your photos-not as good though.