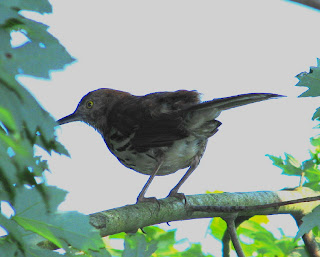 I was able to get in about an hour of birding this morning between 6am and 7am before I had to tend to the mighty list of chores.

Since my time was limited, I decided my best option would be best to have a look at my local patch. Brown Thrashers are a species of special concern in Connecticut. I wanted to see if I could find evidence that they might be nesting in the area. I carefully checked out various thick shrubs along the Connecticut River. this was where I had found them in previous years. I heard a sudden ruckus as two Yellow Warblers chased a Blue Jay with Gray Catbirds squawking during the whole scene. I'm curious about how Catbirds and Yellow Warblers interact with each other. They seem to nest in the same areas and I'm curious as to whether they interact with each other in any way. Cardinals are often in the same vicinity too, but they seem to keep to themselves.

After 20 minutes of searching, I found no sign of a Brown Thrasher. I was about to leave the area, when I heard the familiar double talking songs of a Brown Thrasher. It was coming from within a large, dense shrub. I waited several minutes to get a look. Finally, a Brown Thrasher popped up on a branch for a few seconds before disappearing in to another shrub not to be seen again. With the way these thrashers behave, I wonder if they might be more common than we think. It seems very difficult to see them during nesting season.

After finding the Thrasher, I had a look though a different area. I spotted a Cuckoo passing through but don't know which one. People I've talked to seem to get excited about Cuckoos and want to know where to find them. I've been seeing them most of the places I've visited over the past few weeks.

Naturally, I saw lots of other birds along the way, but there are two that I had particular interest in. One was an epidonax flycatcher that seemed to be giving a two syllable call. I believe it was a Willow Flycatcher, as I went back to listen to the song on c.d. I was glad to hear it call, because I haven't had much experience with epidonax calls.

As I came to the last part of my walk, I listened as several American Redstarts were singing. There was one song mixed in that stood out in stark contrast from the others. It was a call that had similarities to a Carolina Wren or an Ovenbird. After listening and pondering a bit, I decided it might be the song of the Kentucky Warbler. I had seen one a week before at a different location. I could not get a look at this bird after 20 minutes of searching and it was time to go. I decided to record the song using a built in recorder on my camera.

When I arrived home, I was very disappointed to find out that I hadn't actually recorded the song. I must have done it wrong. The type of camera I have, is supposed to be for clueless people like me who just want to point and shoot. There are so many potential settings on it, you would think it was designed for a professional photographer. Kentucky Warbler would have been a nice find on my own stomping grounds. Maybe I'll try again tomorrow.
Posted by Larry at 9:54:00 PM

Hello!
Very good posting.
Thank you - Have a good day!!!

I hope to learn to be as attentive a birder as you are Larry. There are so many species I've yet to see, and your reports of birding adventures make me salivate to go and do more.

Interesting reading! I envy you your birding "ear" as I'm still working on mine. I know enough that if I hear an unfamiliar song, I look to see what bird it is, but I need to do more study.

People get excited about cuckoos here, too!

Really, Larry. I ditto Jayne's comment. You are so diligent! And your diligence pays off.