A Birding Challenge For You! 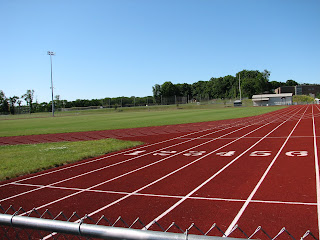 There are many different ways that you can enjoy birding or birdwatching. Some birders like to see the most species possible. Others like to find rare birds. Sunday I decided to try another variation. I wanted to visit a location in my home town that I had never birded before.

The location I chose to explore the area surrounding The Portland High School. I did not choose this location because I thought it to be prime birding habitat. There are no ponds, abandoned fields, or swamps there. It is a series of ball fields surrounded by a shallow border of woods.years ago, there was a pretty deep patch of woods surrounding the school. Some how, houses managed to squeeze their way in to these areas over the years.

My main motivation was just plain old curiosity. I just wanted to find out what birds would be there. For the most part, it was what I expected. Pretty much the same birds that I see at my bird feeders on a daily basis (not that there's anything wrong with that). I found it very refreshing to search for birds in these new surroundings, and there were a few surprises.

The first surprise, came when I ran in to a group of 8 Tufted Titmice. Many of them appeared to be young birds.They were making every sound that I recall Tufted Titmice ever making.they were squeaking, whistling, squawking, talking, and hissing. It was quite a show! They were bouncing in and out of branches at a furious pace. So I learned, this must be a nice area for these birds to raise a family. 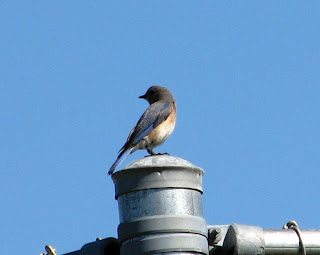 I was also pleased to learn that there were plenty of Eastern Bluebirds here. I came across a few adult birds and several young ones. 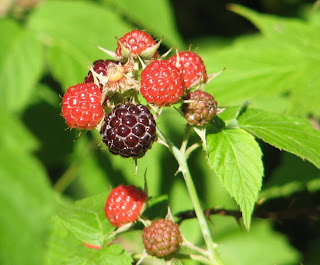 It was nice to find several fruit bearing trees, pine trees , and a healthy patch of blackberries bordering the school grounds. 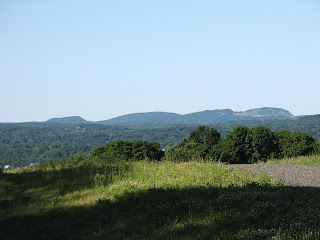 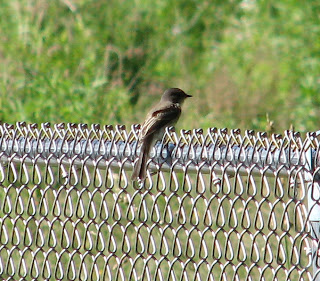 I was also enjoyed observing some flycatchers. The one pictured above, was flying out from its perch to snag insects. It didn't bob its tail but looks like an Eastern Phoebe because of the dark head. There was also Great-crested Flycatchers in the area. I don't know if there is an increase in Great-crested Flycatchers this year, or if I'm just getting better at finding them. They make a kind of croaking call, or some times a giant weeeep sound.

Other birds of note were: Barn Swallows, Red-bellied Woodpeckers,Baltimore Orioles, Northern Flickers, Chimney Swift-(looks like swallow with a cigar shaped body when it flies) , and Cedar Waxwings. Is there anything particularly special about the birds I saw? The answer is all relative to your expectations. The birds I saw on this particular day at this particular location, were exciting to me.

HERE IS A BIRDING ASSIGNMENT FOR THOSE WHO ARE INTERESTED:

1)FIND A LOCATION IN YOUR AREA, THAT YOU HAVE NEVER BIRDED BEFORE.

2)IT SHOULD NOT BE A PLACE THAT IS KNOWN BY OTHER BIRDERS.

4)IF YOU WOULD LIKE TO TAKE PART, BUT DON'T HAVE A BLOG,YOU CAN E-MAIL YOUR REPORT/PHOTOS TO ME. I CAN THEN POST YOUR REPORT HERE.
Posted by Larry at 4:53:00 PM

I know just the place, Larry. I'm going to work on it next week.

With the leaves on the trees, the heat and the mosquitoes, I am finding it harder to see birds this month. I will keep your assignment in mind if I see a comfortable area to work in!
ruth

Ruthiej-that's the spirit.
Ruth-That's one reason I was at the high school-very few bugs and easier to spot birds.

I've picked my spot too!!

I'm up for the challenge, though I've never really done this before and my photography skills leave something to be desired. I'll report back soon.

Lynne-good deal!-I think there's a new song lyrics game on fox too-just to let you know.
Patrice-you don't have to get a bird photo-could just be a location photo-
Mary c-O.k. great!-I'll be looking forward to it.

Hi Larry,
Just back from the UK and catching up on your blog. It will be nice to bird some of the same old spots after birding all new ones for the past couple of weeks. I like your assingment as I find that while birding a new piece of local habitat may not produce an excitingly new bird, it does help me in discovering something about the natural world in which we live, which is thrilling, even if its just a small detail or discovery.
Vern

I think the best spot is the one you just visited :o)

If, and that's a big IF, the temperature falls below 95 and the humidity leaves, I'll look for a place. Until then, I'm locked in the AC! Additionally, when the temps are so high, there's not much bird action unless I can get outside at sunrise.

Larry, I "beat you to it", as part of my breeding bird atlas blocks, I 've trying out some new places very close to home. One of them is covered in my 6/22 entry (an envening trip) on http://tpirro.blogspot.com/ My photos aren't a crisp as yours, the Otter was digi-binned through my binoculars (hand held). I added the complete bird list, to the write-up, today.

Excellent!-I'll have to go back and read it again.-You've got some fancy birding terminology going on -kind of like PA Birder-Breeding bird atlas blocks-interesting way of doing some birding though.
PA Birder-glad you had a good trip.-Now you may need a vacation from a vacation.
Mary-you could always bird from you car with the a.c.on.

So many wonderful spots to find birds and many of those are in areas you wouldn't expect to find birds! Example, walmart, etc.. Love the rubus species, always a good treat when out walking around!

What a great idea! Such wonderful birds. I won't be back in my own environs for several weeks. But I'll continue to follow your serendipitous bird encounters.

Larry, the block names are determined by the organiziation running the breeding bird project. Generally (my understanding) a topographical map (2 quadrants)are broken into 12 blocks,each being 10 sq. miles...so about 3 1/3 by 3 1/3 miles). Typically I would report my birds by town or location but since the project began I report by "block", while working on this project. There is a link on blog to the project, if you are interested to learn more.

This is definitely something I plan to do - probably not until the fall though. Summer birding is on hold for insects and flowers. It's a great idea though. I get stuck in the rut of going to the same 2-3 places over and over.