What You Talkin 'Bout Willet? 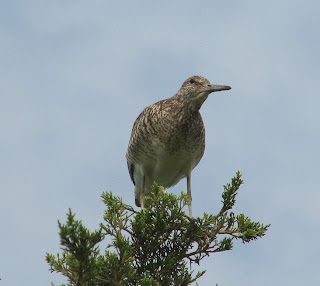 My vacation came to an end last week. It went by all too fast.-Doesn't it always seem to be that way? I decided to stop at a few spots along the shoreline last Thursday. On the ride down, I listened to a novelty c.d. someone had given to me. It contained theme songs from famous television programs. I think this may have altered my birding strategy a little bit. Almost every time I would see a bird, a television character seemed to come to mind. For example, I was trying to decide what kind of bird the shorebird in the above picture was. Suddenly, the voice of Gary Coleman popped in to my head.-"What you talkin 'bout Willis?"-Willet !-that's it.-thanks Gary.

The Willets were flying around the park making lots of noise.They have a really nice white wing pattern when they fly. They would sometimes land in the tops of trees and start squawking.It looked like they might be keeping track of their young. 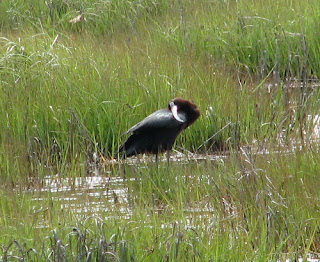 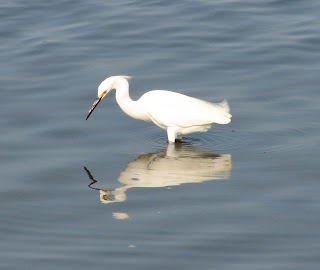 After seeing these two elegant birds, I thought of a title for an avian movie review show. . They could call it "Ibis And Egret" -or---maybe not. I believe the top picture is a Glossy Ibis. I don't know why the bill is so white looking on this one-it sure is a unique looking bill though. I think it's probably due to the lighting. Glossy Ibis is the most likely Ibis to be seen in Connecticut. There is an interesting article about Ibis identification in the latest edition of Birdwatcher's Digest. The second photo is a Snowy Egret. Note that is has a dark bill with yellow lores at the base, and a tuft of feathers off the back of the head. They also have yellow feet (not seen).The similar Great Egret, has a yellowish bill, no plumes on the back of the head, and dark feet. 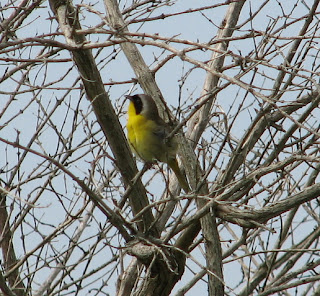 "HOLY COMMON YELLOWTHROAT BATMAN"-Do you think this Common Yellowthroat, looks a little like the boy wonder from Batman? He sure has the right mask for the part. Can you think of any other birds that are ready for prime time?

There were plenty of other birds along the shoreline. A nice flock of about 20 Cedar Waxwings, and a Brown Thrasher are a couple that come to mind. On this day, I spent more time watching indivdual birds rather than focusing on trying to see lots of species. It was a nice way to wrap up my vacation.
Posted by Larry at 9:30:00 PM

Glad to hear you had such a nice time away Larry. Love the prime time labels!

Love your title and how wonderful finding the willet! Looks like you had a wonderful vacation!

Ah, I love your humor! Yes,the common yellowthroat looks like Robin, Boy Wonder. And I do know what you mean about vacations going by too quickly, but sometimes I'm eager to return to work--to recuperate from my vacation!

Nice pics and I'd forgotten all about Gary Coleman!

your post made me chuckle :-)
Great bird pictures and something new learned.
ruth

Hi Larry - glad you had a good vacation. I got a chuckle out of the prime time titles you used. Creative thinking! I laughed at the "poses" the birds gave you -- the willet looked like he overpowered the size of the tree limb he was perched on -- the ibis made me think of someone who would be bashful and say "oh, shucks" -- and best of all the snowy egret looked like it was admiring its reflection and saying "mirror, mirror on the wall..." -- and the common yellowthroat even looks like he took the stance of Robin. :) Well, I guess you can say that was my creative thinking for the day. :)

You've been taking some wonderful pictures. I'm behind!

This is the first day of our month on Cape Cod and I know that a blink of an eye I'm going to be packing up fro home and wondering "where did it go?"

Cathy-this was just a day off that Iwent to the shore.-My vacation was in Northern New Hampshire in the Connecticut Lakes area.-I posted about it below.-Hope you have a great time at the cape.-they have the best fried clams!