Fooled By A Kinglet -The Final Chapter 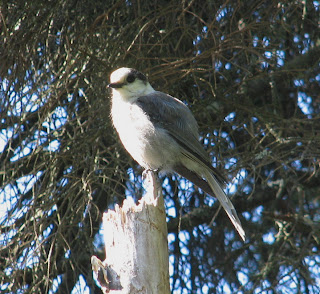 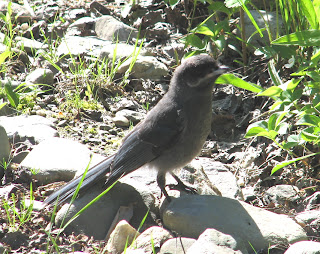 When I Boreal Chickadee -(not too hard to locate).Unfortunately, I didn't find either one of those species. These Gray Jays showed up to console me. The top one is an adult and the bottom one is the darker juvenile. They are fairly tame around people and will look for a handout. I didn't have any food, so they didn't hang around for long. 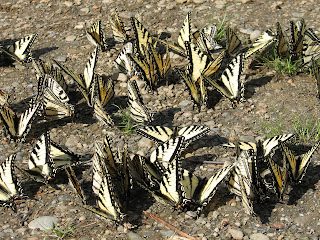 I walked down a desolate logging trail for about 2 miles. This is the second year in a row that I came across a cluster of Eastern Tiger Swallowtail Butterflies.This must be a common occurence in this area during the month of June. I still think it's an awesome sight to see. 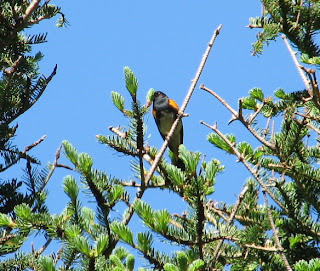 Among the birds that I saw was the familiar American Redstart. I see lots of those during the spring and summer down in Connecticut. I never get tired of seeing them though. One bird that I'm not used to seeing in Connecticut is the Bay-breasted Warbler. I came across two males. I forsook the photo opportunity in order to enjoy a nice view though the binoculars. They did not show themselves for long. Two of my best views were of a Canada Warbler(lifer), and the flaming orange Blackburnian Warbler. The Canada Warbler gave me a nice view of the black necklace.

I was in a territory called Scott's Bog. It seemed there was no one around for miles out in this secluded area. Suddenly, an SUV appeared from no where. A woman and her husband pulled up along side of me to find out what birds I had seen this morning. Wouldn't you know it turned out that I knew them from a birding field trip I had been on in Connecticut. 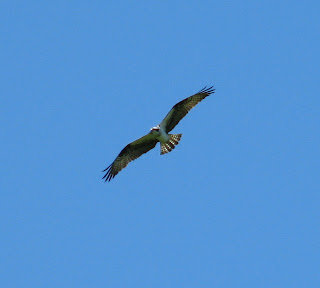 We spent a short time watching birds together. There was a nice view of Osprey flying overhead. Some how it was more of a treat to watch them out in the woods than it is to see them down by the shore where there are dozens of platforms set up for them.

There was one bird that had us totally confused. It was singing away at full volume from the top of a Pine Tree. For a while, we could hear the bird but not see it.What could be singing such a bold song?-a Robin-no it wasn't a Robin's song. Then we had a glimpse of the head and part of the body. It was surely too big to be a Warbler, and didn't seem to have a Warbler's song. The head seemed to be darker like a Blue-headed Vireo but it had a different song. No other Vireo seemed to match the description. Finally, we had a glimpse of red on top of the head. 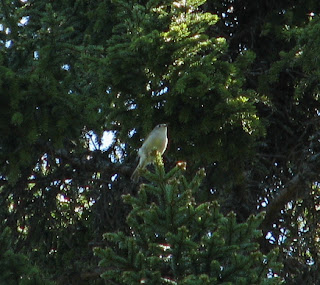 It was none other than the Ruby-crowned Kinglet , which is a nesting bird in Pittsburg New Hampshire. I had never heard a Kinglet sing in Connecticut. In Connecticut they flit from tree to tree making barely audible ringing sounds. They do not perch at the top of a tree with their body fully outstretched singing delightful songs. Laugh if you want, but we were fooled. I'd be embarrassed to tell you some of the identification guesses that we made but that's one of things that makes birding fun.

I didn't get to do as much birding as I would have liked to. I'm already looking forward to visiting this area next year, in hopes of finding the Boreal Chickadee and Black-backed Woodpecker.

You make me wish I could give up my day job for the summer. you saw lots I birds I have never ID'd.
ruth

I'm glad you got to see so many cool birds while you were on vacation. The whole trip sounds fun.

Larry, don't feel as though you didn't see! I'm not sure (I should go back and check on this), but I think Julie Z saw a Gray Jay lately and it was a lifer for her!

Ruby Crowned Kinglets are hard to see - they are so flitty and hide very well. I caught a photo of one in March in low light. But I was happy about it!

You did great on your trip!

Ruth-I wouldn't mind a job watching birds either.
Lynne-Thanks-it was fun-I din't see as many birds as you did in Arizona though-Noah would have had to build an addtional arc to hold all the birds you saw.
Mary-I'd be surprised if a Gray Jay was a lifer for Julie Z.-she's a big time birder.

Patrick-thanks-much appreciated.-The Jays made it tough for even me to not get a decent pic.

I have not seen any of the species you saw, and the butterflies! Way cool!

Ruby-Crowned Kinglet....I heard one singing this spring and had a hard time finding it to identify. Who knew that much sound could come out of such a tiny bird? Those were great pictures of all the birds and I'm glad you got to see so many different ones.

Jayne-You'd better get started on catching up!-(just kidding).
Ruthie J-Yes -I was shocked by its song.

Those butterflies are, indeed, an awesome sight. I once had buddleia bush in my garden that attracted millions of red admirals. As a kid I used to cup one in my hands, and its wings fluttered and tickled my palms.