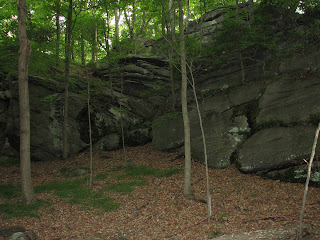 I visited a somewhat overlooked State Park today, called The George Dudley Seymour State Park. The land used to be part of the estate owned by the Clark Brothers.The family tried to turn it in to a resort around the time of The Great Depression but the business failed. It was then purchased by the state with the help of George D. Seymour.
The entrance to the park is at the end of a dead end road. There are three giant cement blocks that barricades a bridge leading to an abandoned road. Once you cross that bridge everything changes.
The road follows a stream that flows thirty feet below the road. Walls of rock surround you on both sides. Large trees converge overhead to create a tunnel effect. I could feel the temperature drop significantly as I continued further down the rapidly declining hill. Something else happened too. I started to hear the sound of silence. All I can hear now is a babbling brook and birds singing. The effect this has on me is sudden and powerful. My breathing slows down and gets deeper. My mind is free and clear.
I was hearing some familiar songs around me: Baltimore Oriole, Black-throated Green Warbler, Worm-eating Warbler, Scarlett Tanager, Eastern Wood-pewee. and Wood Thrush. 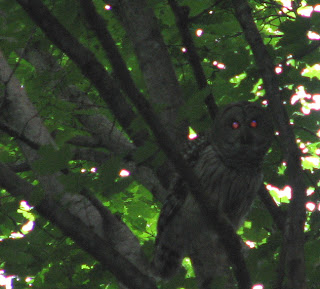 Suddenly I heard a powerful sound echoing through the woods. It was the sound of an owl-but which kind. I've rarely seen or heard any owls while birding other than the Great horned Owl. I started to remember that the Barred Owl has a "Who Cooks for you?" call that seemed to fit what I was hearing. It was very close, and I loved hearing the sound of this owl's call echoing through the woods. I climbed the side of a large rock and entered a little further in to the woods until I saw a pair of big eyes staring at me.I took a couple of pictures, knowing that my camera does not take good pictures in poor lighting. I filmed the owl as well, but seeing the finished product would give you motion sickness. I spent about half an hour watching the owl. Several times it was mobbed by Jays and other birds.
-
I thought about calling it a day. I figured that nothing could top my excitement of seeing the owl but I continued on as it was still very early. I exited the woods and entered the portion of the park which is comprised of fields and swamp bordering the Connecticut river. A seemingly distressed Great Blue Heron passed overhead making very loud squawking sounds. Two immature Bald Eagles landed in a tree at the far end of the field. That's good to see-not all the eagles are adults.
I came to a point where the grass was high and wet.That meant I would have to get wet if I wanted to continue through the fields.-Is it worth it?-I thought to myself. probably not, but what if there is a rare bird at the other end of the field? So I continued on.
Tree Swallows,Yellow-billed Cuckoo-nothing rare. Now the bugs were starting to get hungry, even willing to eat through deet. I was getting a bit agitated. Sometimes when bugs are bothering me, I write an imaginary letter-so I started one:
Deer Flies, Please get off of me. What have I ever done to you?
After stopping for breakfast (Texas French Toast with strawberries and bananas)-I went back to the spot where I thought that I heard a Kentucky Warbler yesterday. It wasn't there. 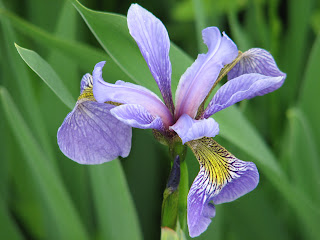 I did see the above flowers growing in the middle of a farm field. Does anyone know what it is?

So today, the magic moments came as I traveled though the silent tunnel. Once I got to where I was going, I turned around and went back. Sometimes the journey is more important than the destination.-Don't you think?
Posted by Larry at 4:58:00 PM

YES YES YES. Myself, I think I would have stayed in the woods. It sounds like a dream.
Looks like a Blue Flag Iris.

What a great day! I have never seen an owl in the wild. The biting bugs really are out in force here and it has been humid with no breezes. My wild irises are not quite out yet.
Ruth

O my goodness! This is such a wonderful time and how wonderful with all those birds!

Lucky you to find an owl and get a pic! I've heard Barred Owls, but never had a look at one.

Sounds like you have a wealth of neat places to explore nearby.

Lynne-I would like to stay in the woods, but I'm always compelled to see what's around the corner.-I was thinking some kind of Iris-thanks.
Ruth-It is nice to have a breeze to back the bugs off in the summer.
Tom-thanks.
Laura-I'm more motivated to get out early and see another one.-It really was a great experience.-As far as places-I try to get the most out of what we do have.

What a cool owl photo Larry! Sounds like another great outing!

Great shot, Larry! Under the conditions, very good indeed. I've seen Barred Owl (once), but never been lucky enough to get a picture!

As for deer flies, someone on the Virginia birdlist who does bird banding at a NWR here swears by these: http://tinyurl.com/3coh46 at www.leevalley.com. The tinyurl link will take you directly to the patches. I haven't tried them (yet).

What a great walk, Larry. Thanks for taking us along. That owl picture is great! I really like owls but very seldom see them.

Lynne got it--blue flag iris (Iris versicolor). It's almost time for them here! Thanks for taking us along on the journey.

I can SOOO relate to the journey being more important than the destination... physically as well as spiritually. Thanks for sharing your journey with us.

I'm a great proponent of saving land for future generations, so was glad to see this area saved as a park instead of developed into a resort. I think the birds would agree with me! And what rewards for trekking into a somewhat overlooked park. You've got the right idea, Larry. I wish I could visit it too. Thanks for sharing it with us.

Well said, beautiful post. We are so blessed to still have so many kinds of birds to observe in this crazy world. Finding peace is so priceless.

Betsy-thanks for the info-under the conditions -bettter a photo than none at all.

Deb-Glad to take you along on the journey any time-please cary out what you carry in to the park
though.

birdfreak-Peace is crucial to the health and well being of the spirit.-birds don't hurt either.

What a beautiful day. Most people don't experience all that lovely mystery in an entire year. Now if you think about that - it makes you feel pretty lucky.

I had to smile at the the inner- dialog-as-coping-device as the mosquitoes got too friendly. Yeah. If they started going past my Deet - I'd be fighting panic.

Cathy-I do a lot of thinking to myself-probably too much.