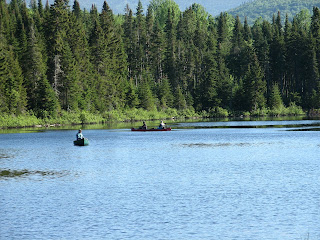 If you're looking for excitement, Pittsburg- New hampshire is probably not the place to go. There's not much in the way of culture or entertainment. So what's so special about this area? Almost all of the woods and water are protected here. People come for fishing, hunting, snowmobiling, moose watching, and let's not forget my personal favorite-birding.
I was officially here as part of a group fishing trip. Not surpringly, I still managed to squeeze in some birding during my stay. Even if I din't look for birds, they would find me anyway. 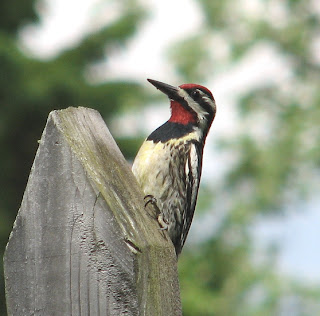 We were greeted by Yellow-bellied Sapsuckers upon arrival. The male has a brilliantly colored red throat. It makes a sound that reminds me of one of those little squeeze toys. They stayed near our cabin during our entire stay. This was a treat, because I don't often see them in Connecticut. 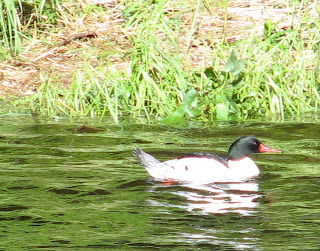 Our Cabin sat upon the bank of The Connecticut River. It is just a stream in Pittsburg, but turns in to a major river before it empties in to long Island sound in Connecticut. Common Mergansers, like this one, would repeatedly fly upstream, then drift by our cabin.

Red Squirrels, and chipmunks also kept us company. One chipmunk ran across the top of my foot when I was sitting on the porch. One thing that I can not understate, is the chorus of bird song we heard. Black-throated Green Warblers could be heard singing from every direction from our cabin from dawn till dusk. Northern Parulas, Pileated Woodpeckers, Belted Kingfishers, Red-breasted Nuthatches, Swainson's Thrush, American Redstarts, and Winter Wrens were other birds that we could hear on a daily basis. The Eastern Phoebes were nesting under the eave of the porch.

It was a real treat just to sit on the porch and look across the river to see nothing but pine trees. There was also a dead tree that was over 100 feet tall on the opposite banks. Several birds including Cedar Waxwings, Pileated Woodpeckers, and Common Ravens could be seen perching on it. I am still trying to catch up with things at home, so I will continue with more details in Part two.
Posted by Larry at 6:11:00 PM

So how was the fishing?! I am going north to "fish" in 3 weeks, but hope to be as successful as you were with your birding.
Ruth

fisihing was good but not great-We caught plenty of native brookies and a few larger Rainbow Trout.-We spend more time trying to find the hotspots than we do actually fishing.

Woods and Water! That is my kind of trip! Looks like you had some wonderful birds on your trip!

It looks beautiful up there! Black-throated Greens are one of my favorite warblers!

Sounds like you had a great trip. It must have been very peaceful.

Tom-You and me both.
Veery-I could not believe how many BT-Creens are up there.
Ruthiej-It is peaceful but there are a surpising amount of bikers that travel to and from Canada up route 3.

The birds found you indeed! Sounds like it was a wonderful time away.

Looking forward to part 2. You didn't even have to go looking for birds - they came to YOU!

I can't get enough of woodpeckers. Whenever I see one I get so excited that I can hardly manage my camera.

Glad you had a good time!

I'm so glad you had a good time- we missed you around here! It sounds like a lovely place. I like to fish (only with a worm and a bobber) but I really love being in a boat out on the water. Sounds like heaven!

Who needs excitement when you have birds? Birds are exciting! Welcome back...

That sapsucker pic is gorgeous Larry!

Sounds like a nice trip - look forward to reading the details.

Wow. I"m envying the trip! Sounds like you had a very nice time, and plenty of wonderful wildlife adventures.