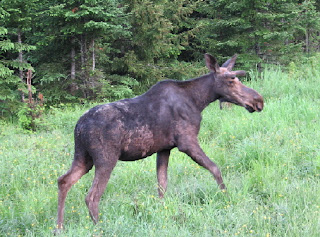 There are so many fishing possibilities in Pittsburg, that you just can't cover all the possibilities in a week. There is also a nice variety of restaurants for such a small town-(there was a total of nine graduates this year). It's hard to tell who works at the restaurants and who owns them. The owners often sit out and fraternize with the customers.

Most of the locals tend to be very friendly. Some call people from out of state - "flatlanders". They are unhappy with some people from out of state who have been purchasing land and building fancy houses for occasional use.
I had my fill of fishing and eating for the week. I'd been looking forward to venturing out on one of the logging trails to see what birds and wildlife I might encounter. Moose like the one in the top photo are a common sight along route 3. People ride out to a certain portion of the road called "Moose Alley" to look for moose each night. Usually a dozen or more moose can be seen. Route 3 is really the only main pave road. It takes you right in to Canada. Pretty much all other roads are dirt roads or logging roads off of route 3. 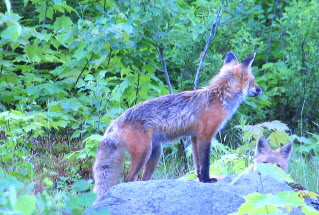 This Red Fox seemed to be preoccupied with it's young ones.One can be seen poking its head over the rock. 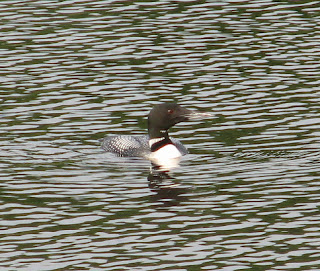 There are plenty of Common Loons in the area. I passed this one on the First Connecticut Lake on my way to East Inlet-(known to be good for birding). 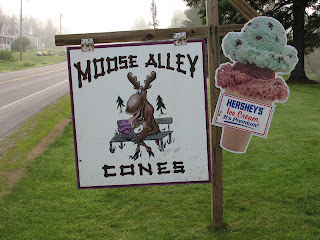 Did I have a sudden urge for Ice Cream at 6am in the morning? Maybe-but that's not why I stopped here. 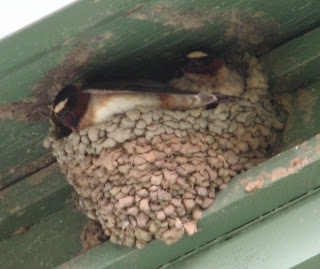 There were Cliff Swallows nesting under the eaves of the building, so I stopped to get a photo. It seems as though I'm getting off track a bit, so I will finish with Part 3 tommorrow.-

I wanted to see a Moose in the Upper Peninsula of Michigan, but no deal. We did see plenty of Common Loons.

The area seems a bit similar to the UP in some ways based on the pictures you've shown.

I used to hate swallows because they never stopped moving, but just like the small brown sparrows and "Petey" Flycatchers, they have grown on me over the years.

I can't wait to bird in the New England States, but it is so far! Someday...

Art and I went out the back roads in far northern Minnesota (before kids) looking for moose a few times. What amazingly huge animals they are. One night driving back in the rain we were nearly hit by a bull moose crossing the road. Luckily we were driving at a snail's pace!

The fox picture is sweet.

Such great pictures, Larry! That little fox peeking over the rock is too cute. And that swallow nest....all those little mouthfuls of mud making up the nest. Amazing! Thanks for sharing.

I would have loved to see all those moose and loons! Such a wonderful shot of the fox! Bravo!

I missed this post, Larry. I am really impressed with the red fox photo. You could probably frame that one!

veery-Swallows drive me nuts too-stay still already I say to myself.
Ruthie J-thanks for the comments.
Monarch+Mary-Photo compliments from you two means something because you are both great photographers-I'm not a photographer-I just take pictures.