Close Call With A Tornado In The Great North Woods 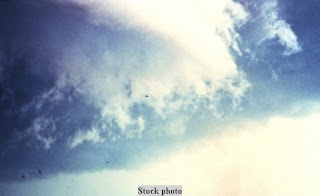 I have gone on a fishing trip nearly every year, for the past 30 years. My father and I, along with a few of the guys, rent a cabin in northern Maine, New Hampshire, or Vermont. Some of these areas are very remote. Large portions of northern Maine have territories instead of towns. Over the years, I've had some interesting experiences on some of these trips. I never bothered taking photos, and I didn't keep a journal. The following story is based on a memory from one particular fishing trip in Jackman Maine , about 25? years ago.

It was mid May. I was with my father and another guy named Fred, sitting in a small aluminum boat on Heald Pond. We had hauled this boat, along with a motor about half a mile through thick woods to get to this pond. We were always willing to put forth extra effort to find a fishing spot that had the promise Trophy Brook Trout, or square-tails as the natives called them. We enjoyed some tremendous fishing that day. This was one of the few times that a place actually lived up to its reputation.

I remember at one point, I observed a fish jump 2-3 feet out of the water. What was it doing? I wondered. It turns out that it was a Landlocked Salmon. It had picked up my worm from the bottom of the pond, and I didn't even know it.-enough of the fishing. Oh yes, I should mention that I enjoyed seeing the Common Loons swimming around us. I was amazed at how long they could stay under water .

We were drifting in the middle of the pond, which was maybe a mile wide. The weather was perfect. It was a sunny day with bright blue skies and very little wind. After spending a couple of peaceful hours fishing, I noticed a wall of very black clouds way off in the distance. They seemed to be many miles away, so I ignored them. A couple of minutes later, I noticed that they had cut their distance in half already. I said "Dad, maybe we should move a little closer to shore. Those clouds seem to be gaining on us." My father wasn't impressed with the clouds, but started to casually move us in a little closer to the shore.

We didn't make it 50 feet , before this storm was on top of us. The rain poured down so hard, that I couldn't even see the shoreline. The sky was so very dark, and the black clouds seemed to be just over our heads. We were going full speed ahead, hoping to find any portion of the shore. We actually crashed in to the bank. The three of us, ran in desperation, trying to find some shelter. We ended up in a dirt hole from a large uprooted tree. I was able to make out a white blurb in the center of all the black clouds, and there was a strange whistling noise. I think it was Fred that mentioned the possibility of some sort of Tornado. Seconds after the white blurb passed by, we heard trees crashing in the woods. The sound reminded me of the original King Kong Movie. You could hear the sound of an awesome force smashing trees to the ground but Kong was not visible. Hearing, but not seeing added to the drama.

The storm passed as quickly as it came. When we returned to town, we saw more destruction.The front of a store had been ripped off and a logging truck, loaded up with trees, overturned.it was determined that it had been a Tornado.We never saw the funnel cloud, but the experience certainly left a lasting memory.
Posted by Larry at 5:15:00 PM

Larry - THAT was too close for comfort. Dang! I would have been TOTALLY hysteric. I tell you what, though - it makes for a great story.

Great story, Larry, and I think you're pretty fortunate to still be alive to tell it. Tornadoes are so unpredictable, but I would have been even more afraid of the lightning. Did you go home after that or head out for more fishing?

Scary! I have spent many, many hours in a fishing boat, way out in the middle of good sized lakes. Twice we have been caught in thunderstorms that made me think my life was undoubtedly ending. I felt like a lightning target. You can be very vulnerable, very quickly in the open.
ruth

O my goodness! When I was a kid we drove through a tornado coming home from an amusement park! We didn't know until we got home that very close to where we were a tornado had touched down! It was very scary and we did see green lightning!

Cathy-We were nervous, but we also found the whole experience to be exciting.

RuthieJ-Can't remember what we did after drivng though town-probably took a break at the cabin and talked about it.

Tom-I never saw any green lightning-that must have been interesting.

Wow. Reminds me of being in the woods a couple of weeks ago and a branch, without warning, randomly fell out of a tree. Your story is much more dramatic... still I was amazed at how quickly it happened and grateful that I wasn't standing under it.

Wow Larry... how frightening that must have been, and you can describe it as if it happened yesterday, so I am sure it left a lasting impression. So glad you all made it home safely.

This reminded me of a similar experience as a kid out on Lake Hopatcong (NJ's largest lake). We never saw the twister either, but we saw the aftermath. I mostly remember a bunch of us hiding out in a bait shop.

Scary experience. I've always been nervous about being in a boat on a lake when weather gets bumpy.

Wow, Larry--great story! So glad you lived to tell it.

In TX, I had close encounters with tornadoes six times; I never saw the funnels, but I heard and/or felt their presence each time--either with debris flying around me, my car being blown around, or really loud noises, etc. Scary! Still, though--I'd love to be a storm-chaser!

Larry, you are lucky to be able to tell this story and you told it very well as I was on the edge of my chair.

I've seen a very small tornado once - about 1/2 mile away - but the strength of the wind could have blown me over while I was running home.

Jennifer-I am always wary of trees that are ready to come down, especially during windy days.

Jayne-I do remember it as if it just happened in recent history.
Patrick-Always exciting to be involved with a storm-as long as no one gets hurt.-A bait shop-odd place to be stuck-sounds like a plot for a sitcom.

Betsy-Hi betsy.
Lynne-I am wary of bad weather on boats too. I once had ended up several miles away from my launching point due to heavy wind and waves-I just could not get my small boat back.

Dzugman-I would love to watch a tornado from a safe distance some day.I'm always watching the skies during thunderstorms.

Mary-still-it must have been interesting to watch.
Mary-

I was also in this tornado. I was riding my tricycle on main street in Jackman and remember riding off the sidewalk as my dad was calling for me. I could see him on the porch but couldn't steer my bike there. I will never forget it.