Breakast With The Birds 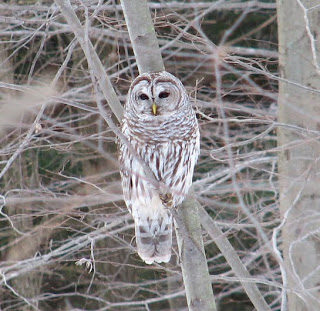 I know that sitting quietly in the woods can be a great way to observe birds and wildlife but staying still is not something that comes naturally to me. I'm always on the move during the work week so it takes some self-discipline for me to hike out in the woods and sit in one spot for any length of time.

On Saturday morning I visited River Highlands State Park in Cromwell. I sat with my back against a tree as I ate my breakfast sandwich and took my time drinking a large coffee. That was my way of making myself keep still. I watched and listened as the Juncos, Tufted Titmice, and Black-capped Chickadees moved about busily in the woods around me. Other birds in the area included: Golden-crowned kinglets, Red-bellied Woodpecker, Hairy Woodpeckers, Downy Woodpeckers, Blue Jays, and American Robins.
-
Less than a half hour went by before my patience was rewarded. First, a Pileated Woodpecker landed in the top of a tall tree to rip out a few chunks before flying off. The highlight of my morning was when a Barred Owl (above) which landed landed in a tree about 30 feet away and only about 8 feet off the ground. We sat and looked at each other for the next 20 minutes. I knew that it saw me but did not seem threatened by my presence in any way. It was one of those special moments that will remain etched in my memory. 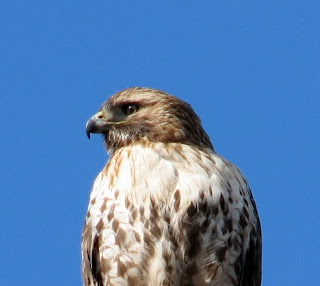 I spent December and January finding as many species of birds as I could during Christmas counts and Big January. From now until Spring I'm not concerned with how many birds I see, only how well I see them. 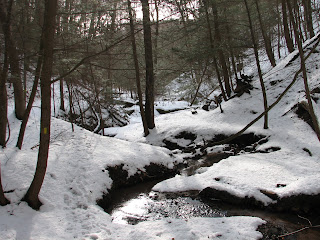 There are several short trails in River highland Park which lead you through ravines and streams like this one. The nice part about it is that they all lead you back to the main trail so you don't have to worry about getting lost. 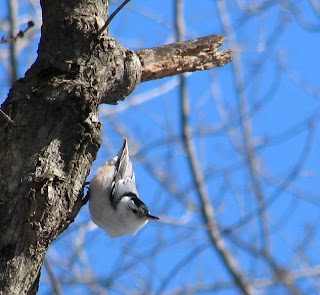 There were good numbers of White-breasted Nuthatches in the park. I never complain about seeing to many nuthatches. I like the way they pose in interesting positions. 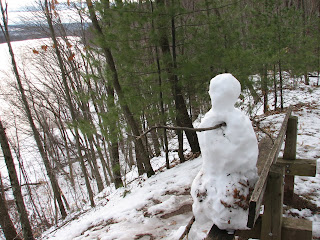 I tried to make conversation with one of the local snowmen but was met with a cold shoulder. 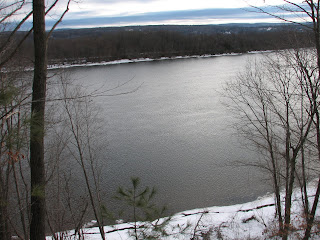 He was nice enough to point out the Connecticut River to me. There is a bluff that sits as high as 150 feet above the water and follows the river for a long stretch with continuous views along the way. 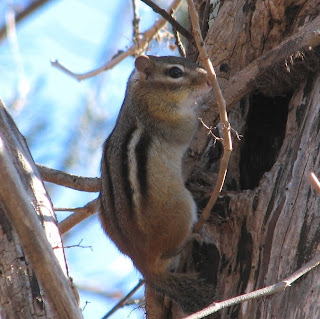 Its surprising how comfortable wildlife is around you when you are a visitor instead of an intruder. The chipmunk looked me right in the eye before crawling inside this tree hole. 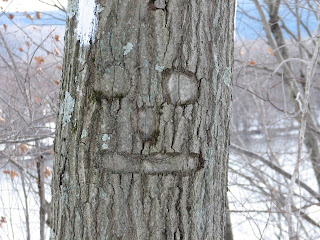 I'm not sure if this one is happy or sad. I wonder what it would say if it really could talk? I'll bet that trees would have some interesting stories to tell.
-
I've been struggling to find the time and ambition to post anything lately due to my busy work schedule. I'll probably start blogging more often once Spring arrives. Until then, I'll continue to enjoy my weekend woodland walks while waiting and wondering when the winter will wane.
Posted by Larry at 9:29:00 PM 22 comments: 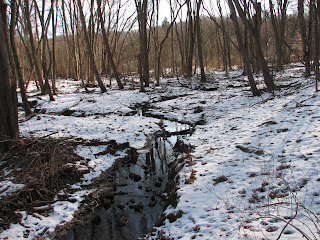 Whenever I come across an unfamiliar stream I'm curious about where it might lead to. It's the little overlooked or unnamed tributaries that interest me most. As a teenager, I enjoyed hiking in the local woods and following streams that led me to remnants of old buildings, surprise encounters with wildlife, mysterious rock caves and various other surprises. Some of the places I found became secret locations where I would hang out with friends, turn over rocks looking for salamanders, or just a place to go for some peace and quiet. It was always an adventure because I didn't have any maps or the Internet to rely on.
-
I followed a couple of small streams the other day for old time's sake. The first one I investigated didn't have moving water. I've passed by this stagnant little excuse of a brook on many occasions but never bothered checking it out. It led me through a marshy area where the calls of nuthatches, chickadees and titmice seemed to welcome me. 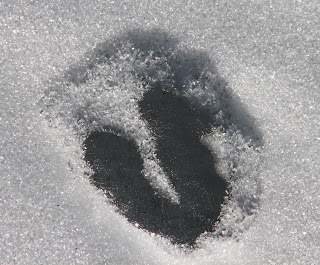 The brook quickly dissipated into nothing so I started following a deer trail which brought me out to a small patch of land. 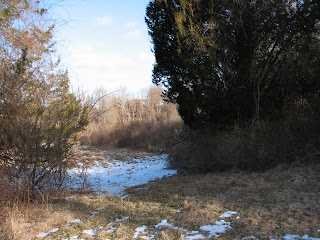 It was only about an acre of land that abutted a farm field. I was impressed with the amount of bird life in this little area. I counted 6 Northern Flickers that launched out of the bushes like rockets when I approached them. There was a Ruby-crowned kinglet and a Hermit Thrush tucked away in some thickets. Where was that Ruby-crowned Kinglet in January? 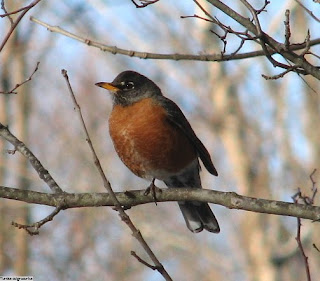 There was plenty of American Robins too. When people find out that I'm interested in watching birds they often ask me if robins are around in the winter which is funny because I see so many of them this time of the year. I guess that people notice them more in the spring when they are plucking earthworms from their lawns. 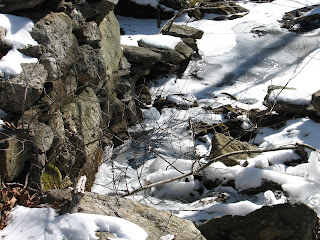 I tried to followed another streams off of route 66 where I came across the remnants of this old foundation. 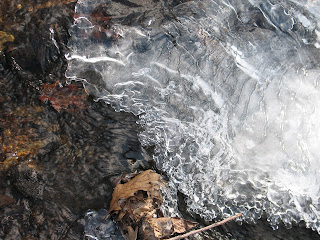 A lot of the smaller tributaries were frozen over. I enjoy seeing the water move beneath the ice. 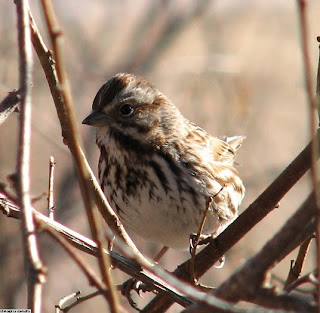 It was a quiet day as far as birds go but I did have a friendly visit with a Song Sparrow. He told me that the secret to finding more bird in the woods is to come back in the spring. Until then I'll keep following my streams.
-
Have you ever followed a stream? Where did it lead you?
Posted by Larry at 7:52:00 PM 14 comments: 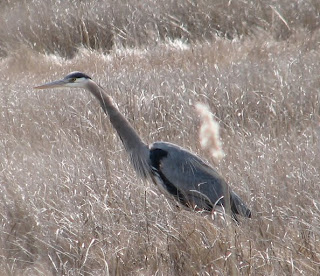 I went into this weekend needing just a handful of birds to pass the 100 mark that I reached last year. On Saturday I made a stop at Hammonnasset and ran into a group of birders that were in the midst of a Hartford Audubon field trip. It was so cold that the eye cups on my binoculars were freezing to the material on my ski mask. I saw some interesting birds during the short time I spent there. Birds included a Great-horned Owl a jumbo Cooper's Hawk with fluffed up feathers, American Pipits, Horned Lark, Cedar Waxwings, and Fox Sparrows. I was able to add the waxwings and Fox Sparrows, to my January total. After I left Hammo I was able to locate Monk Parakeets in Old Saybrook. 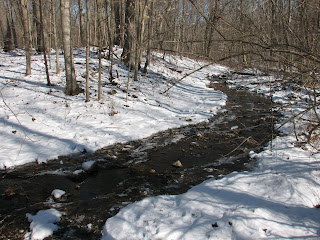 Sunday was not as cold as Saturday as the bright sunshine made it much more comfortable. For my final day, I chose to visit Pease Brook Wildlife Management Area, a place I had tried this past fall . The habitat consists of open fields, powerlines lined with cedars, and woods with a very shallow brook running through it. I thought that I would have a chance to find Brown Creeper, Yellow-bellied Sapsucker, Field Sparrows, Ruby-crowned kinglet and Eastern Towhee at this location.
I decided this was the place I was going to end my Big January whether I found the birds I was looking for or not. I was going to cover this area thoroughly and enjoy a beautiful winter morning observing birds and nature. I was tired of driving around the state all month so this was where I would was going to finish. 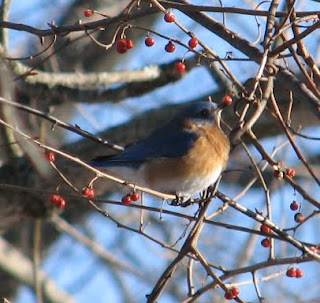 So I watched Eastern Bluebirds taking turns picking berries from the bush........... 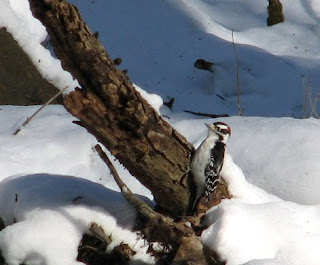 .........and a Downy Woodpecker that was searching for food close to the ground.
I searched the cedars near the powerline carefully and caught a glimpse of a kinglet on one. If this was a Ruby-crowned kinglet on the branch, it would be a new January species for me. I raised the binoculars to my eyes and what I saw was--fog! My binocular lenses completely fogged up at the wrong time. The kinglet had moved on to another area but I think it was a golden anyway.
After I missed the kinglet, I found a Yellow-bellied Sapsuckers near the top of a tree and shortly after that a Brown Creeper at the base of a tree. This brought my total to 101 which was one more than my 2008 January total. Earlier in the month I had higher expectations but on the last day of January I was quite pleased to reach 101. 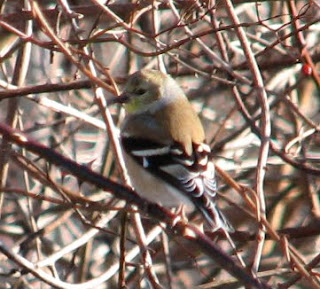