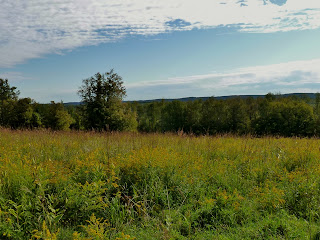 I went to a Hartford Audubon hawk watch Sunday on Booth Hill in the town of West Hartland. The watch was conducted by Paul Carrier who provided interesting tidbits of interesting information about hawk migration throughout the day. Booth Hill is located in a scenic country setting and the only thing that prevented it from being the perfect fall day was the date on the calendar. 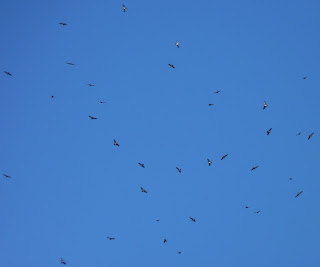 I'm glad that I arrived before 9am because we counted approximately 1,000  kettling Broad-winged Hawks passing overhead by 10am. I've seen them kettle before at hawk watches during the last couple of years but never in such concentration. It was an awesome sight! We added another 1,000 broadwings to the list by noon and the total for the day was about 3,000. Other species passing through include Osprey, Bald Eagle, and American Kestrel. There were also Sharp-shinned Hawks and Red-tailed Hawks haning around the area.
click to play
I enjoyed participating in the count by searching hawks in the distance with a spotting scope. I was under the impression that the best time to start searching for migrating hawks was about 10am and that it was a waste of time looking for them in the middle of the day. Neither one of these theories held up on Sunday. It was slower during lunch hour but we were still able to find a few. 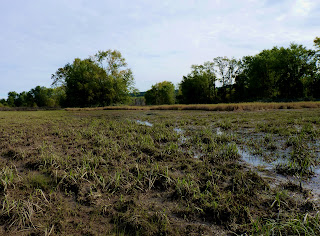 Saturday was an entirely different experience for me. I went to check out Wangunk Meadows for the first time since the flood waters subsided. I had a difficult time navigating through the soggy fields, almost falling several times. My boots and pants were covered with mud by the time I finished my walk. 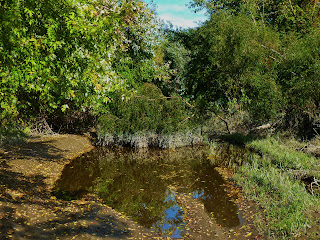 Downed trees and giant puddles were a reminder left behind by hurricane Irena. 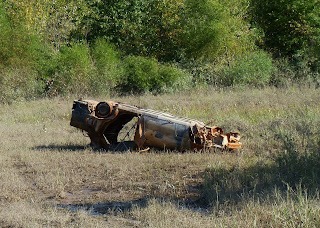 Wangunk Meadows is not the prettiest place to go birding. During the summer it is used as a training ground by mosquitoes to inflict misery upon humans. There are abandoned cars and other debris strewn about. 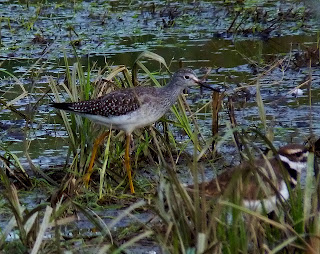 I may not enjoy sloshing around muddy- floody fields but shorebirds certainly don't mind it. The fairground area was chock full of them on Saturday. I found yellowlegs,  Least and Semipalmated Sandpipers, Killdeer, Wilson's Snipe, and a Semipalmated Plovers . 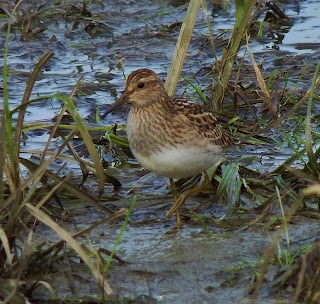 I also found a few Pectoral Sandpipers in the mix. I may have found them here before but I can't remember the last time that was.

I continued to walk further north along the Connecticut River. The Wesleyan rowing crew was busy  at practice. 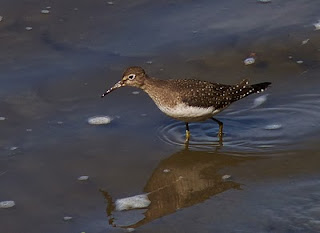 I found several not-so-Solitary Sandpipers like this one along the way. There didn't seem to be a great variety of species beyond the shorebirds I saw. I found a few Swamp Sparrows and my first sighting of a Marsh Wren at the meadows was a nice surprise.
One day I'm covered with mud watching shorebirds and the next day I'm watching thousands of hawks flying over head on their way to the tropics. These were two, totally different experiences that made for an exciting weekend of birding!
Note:There is something odd happening to my photos when you click on them. I don't know if this a change implemented by blogger or if something is broken. Is anyone else having the same issue?
Posted by Larry at 8:17:00 PM 9 comments: 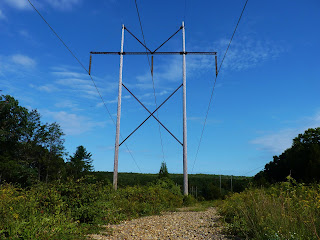 I spent time birding along some local Power line cuts this weekend. I find them to be a covenient place to search for birds. They have built in trails, shrubs & evergreens of various heights in the middle, and taller trees along the borders. That makes it easier to move around and see birds from various angles. 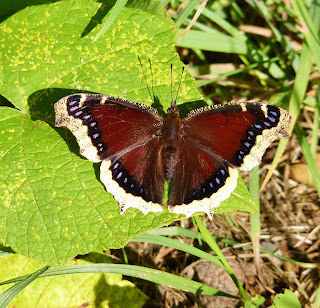 I met up with some fellow birders on Saturday for a Hartford Audubon field trip.  Joe (leader) led us through some areas in the Maromas section of Middletown. None of us had a butterfly book handy but one member of the group was able to identity this butterfly. I'm used to seeing these butterflies very early in the year. - can you identify it? (Click here for the answer). 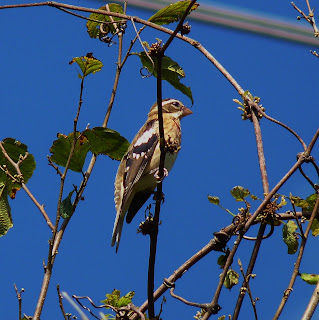 We saw a nice variety of birds on Saturday including a Scarlet Tanager and a Rose-breasted Grosbeak (photo). At first we thought it was a female but we noticed there was a splash of red on the chest indicating it was a young male. 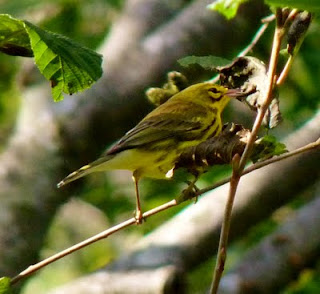 On Sunday, I checked some of the power lines and an undeveloped rail trail in Portland. Some notable birds included: Prarie Warbler (above photo), American Redstart, House Wrens, Eastern Towhee,  Blue-winged Warbler, Broad-winged Hawk, Ruby-throated Hummingbird, and Yellow-throated Vireo. My favorite sighting of the day was a close-up view of a Hooded Warbler. It was a brilliant male just a few feet away.  I was afraid to take the binoculars away from my eyes. When I did, the bird was gone along with the chance for a photo.

-
I had an early taste of the fall weather this weekend and it felt good to break out the binoculars again. The power line cuts made for productive birding areas this weekend. I'm looking forward to more fall weather and plenty of good birding opportunities.
What's the most interesting bird species you've seen in your area recently? 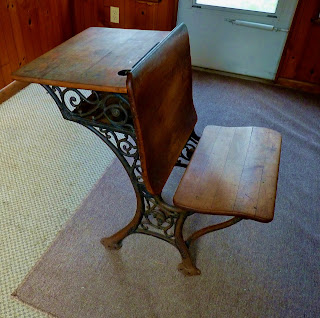 I took a ride out on route 151 this weekend to visit some local birding spots. I intended to make Hurd Park but there were several tag sales on the way. This antique school desk caught my attention because of the detail on the iron and the following information that was marked on it:
U.S.F. Co Battle Creek Michigan- Pat May 25, 1875.
I was able to determine that it was built by the Union School furniture Company. There was an article online about a fire that occurred at the factory in 1892. I was even able to find an online copy of one of their catalogs from the 1800's!  The patent date is for the fold up seat feature which was invented by a man named Uriah Smith of Battle Creek. He was also the creator of an oddball invention called the 1899 Horsey Horseless. 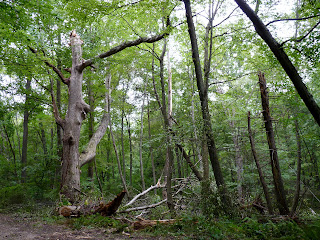 After stopping at 5 tag sales I finally made it to Hurd Park. I went there hoping to find Hooded Warblers. I could hear them singing but was only able to get quick glimpses of the. Other species I saw there included: Wood thrush, Pine Warblers, American Redstart, Great-crested Flycatcher, Eastern Wood-Pewee, Brown Creeper, White-breasted Nuthatch, Red-bellied Woodpecker, Tufted Titmice, and American Robins. There were plenty of birds at the park but they were mostly quiet and hard to see. The viewing conditions were not good and I was unable to get any decent bird photos. 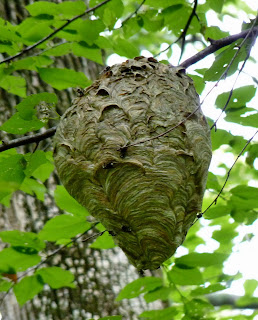 I settled for a picture of a hornet's nest. 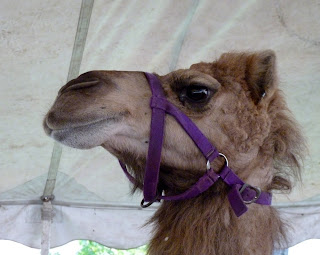 One of the reasons there were so many tag sales on 151 was because of the Haddam Neck Fair which took place over the weekend. The fair is located right off of 151 and people were taking advantage of the increased traffic to the area. I made a stop at the fair to check it out. I visited the camels and Llamas........ 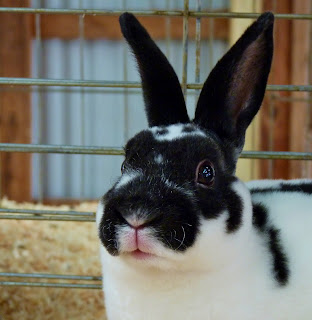 and Checked out some of the prized rabbits. 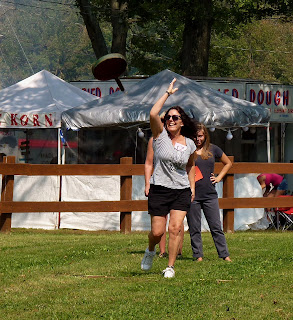 The thing I find most interesting about country fairs (besides the food) are the unusual events they have. How many opportunities during my lifetime will I have a chance to see a frying pan tossing competition?
click to play
Posted by Larry at 7:57:00 PM 1 comment: 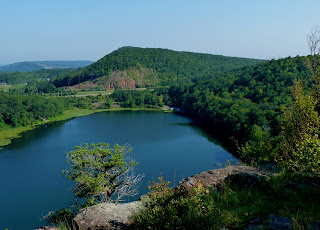 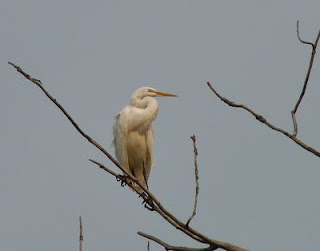 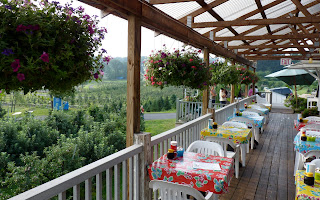 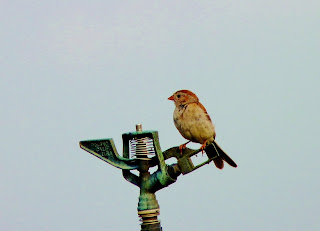 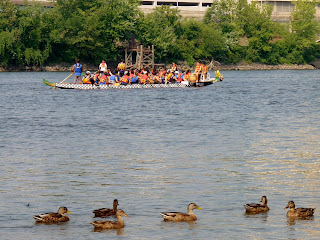 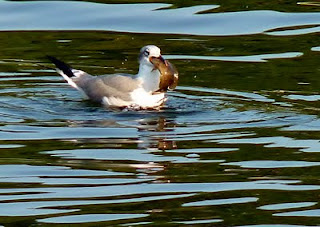 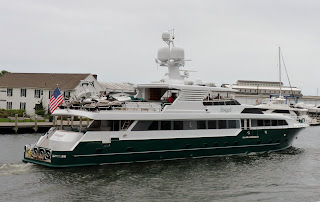 My wife and I spent a couple of relaxing days at the Steamboat Inn at Mystic. We enjoy looking out the window as boats pass by. The name of this yacht is Serque.
Other than the hurricane we've had nice summer and fall will soon be here.
click to play video of Mystic River Bridge being raised
Posted by Larry at 4:43:00 PM 6 comments: