Ignoring The Snow And Just Getting Out There 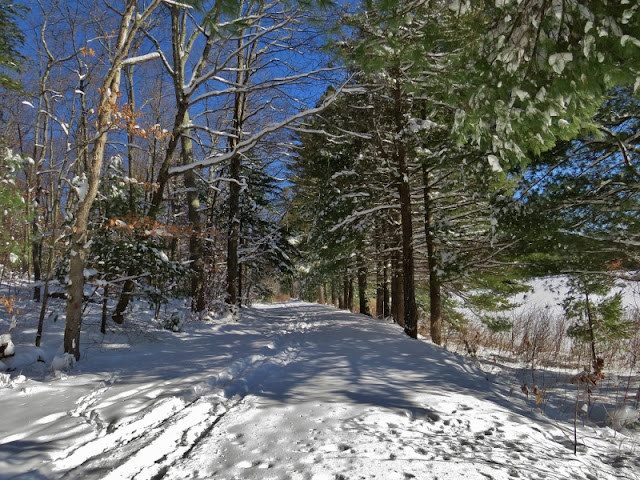 We've been spoiled by a mild in Connecticut so far this winter but we finally had some significant snowfall. A walk through the state forest gave me a good workout but yielded few bird sightings. 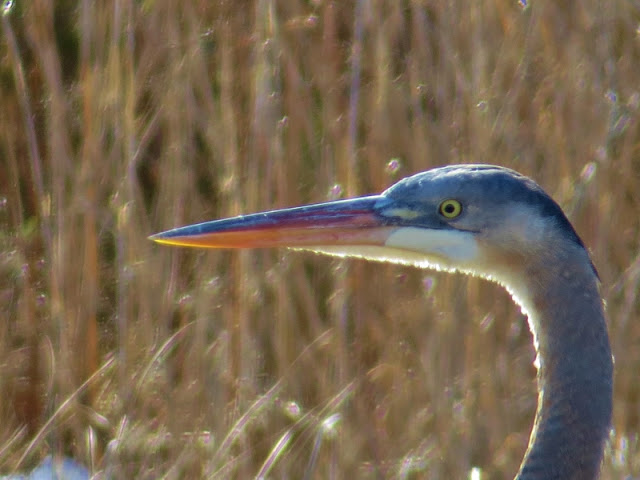 I was able to find a hearty weather Great Blue Heron still hanging around at a marsh. I find that it's easier to get through the winter by trying to embrace. I plan to get outdoors on the weekend instead of hiding in the house until spring.
Posted by Larry at 12:50:00 PM 4 comments:

Started out Birding Then Along Came A Fox 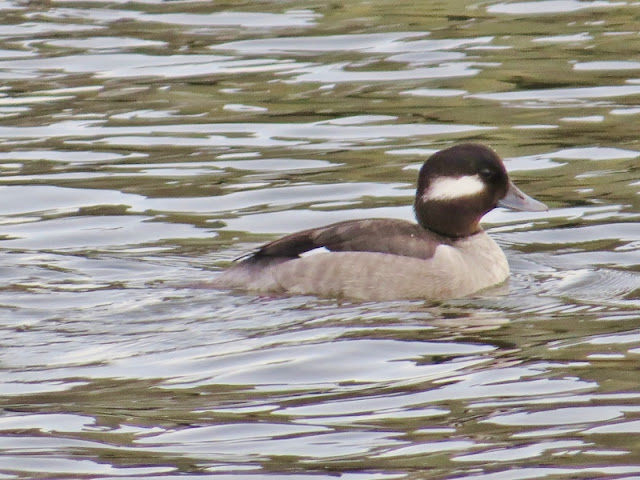 It was a cloudy with temperatures in the 30's which isn't too bad for this time of the year. I made quick spots at various points along the shoreline in the Saybrook area. Some of my highlights included sightings of 22 Surf Scoter, 83 Ruddy Ducks, and a decent view of this Bufflehead which was hanging around some docks all by its lonesome. 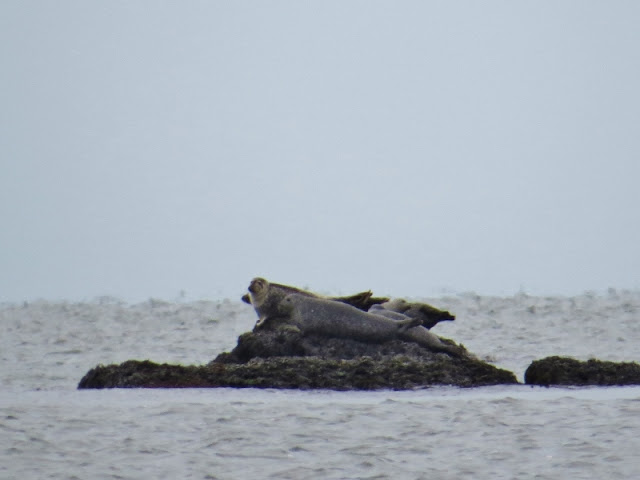 Some seals resting off on a distant rock. They seem to have become more numerous in Connecticut during recent years. 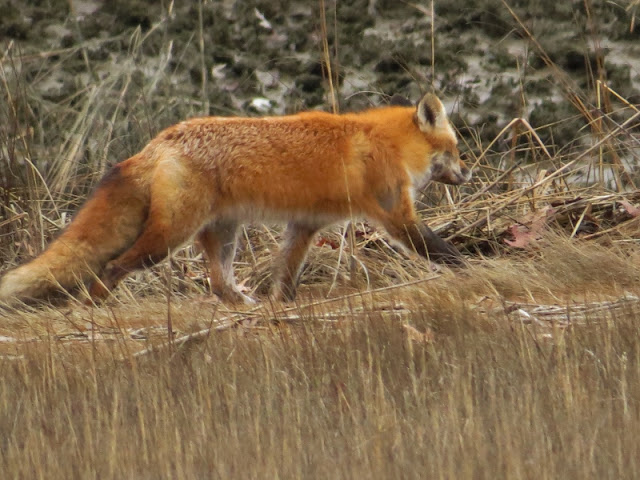 My favorite sighting of the day was of this Red Fox which was sneaking around a marsh.it was fun to watch the way it would duck for cover,disappear and then reappear in another part of the marsh. 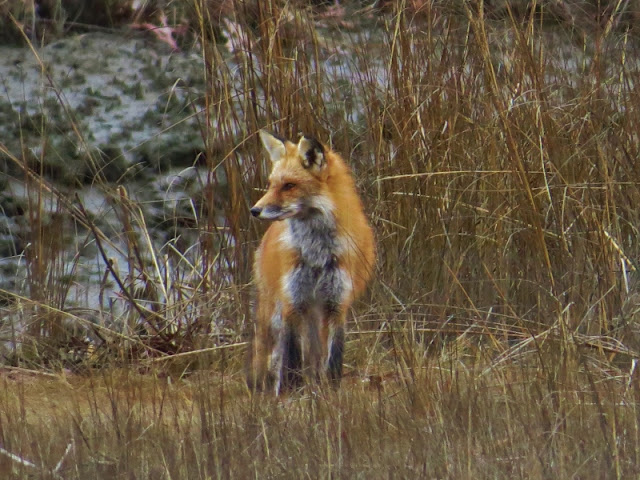 Non-birders sometimes ask me why I watch birds instead of other animals. I think the answer comes down mostly to numbers. I can usually see up to 100 or so species of birds in a month but I don't see a great variety of mammals in the wild other than deer so seeing a fox is a real treat for me.
Posted by Larry at 3:46:00 PM 5 comments:

Why Do People Bother Keeping Lists Of Birds? 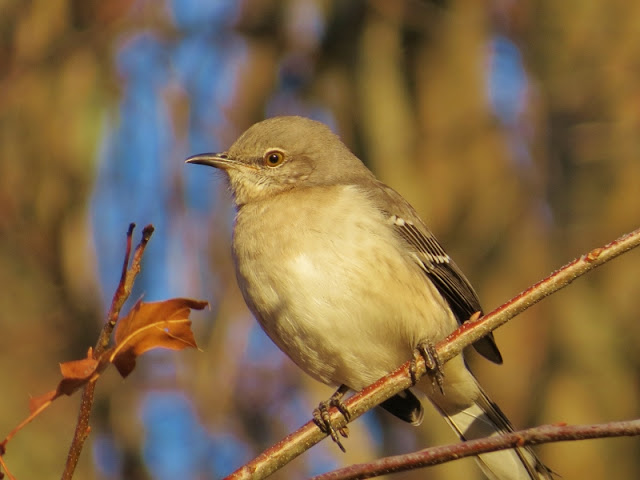 (first of year Northern Mockingbird)
At the beginning of each year many birders start a list to track their first sighting of the year for each bird species they see (foy=first of year). Some organize these into month lists, year lists or whatever type of list seems relevant to them. I've never been particularly interested in keeping lists but eBird has made it so much easier that I've tried to keep up with it the last couple of years.

I've sometimes wondered why people bother keeping lists of birds and gain a sense of satisfaction as their lists gets bigger. I think  human beings have an instinctual need to organize things. It makes us feel more secure and in control. People in general also like to strive towards achieving goals. So the desire to lists birds is really not much different than a desire to complete a puzzle or score points in a basketball game. 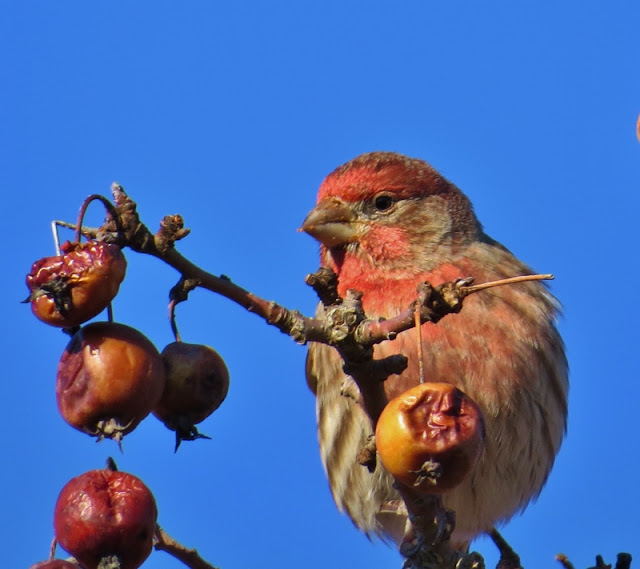 first of year House Finch
Some of us may not be as competitive or organized  and are content  just to watch birds or take photos of them. Either way anything that gets us outdoors to appreciate nature has to be a positive!
Posted by Larry at 4:37:00 PM 1 comment: