A Visit To Ferd's Bog In The Adirondacks 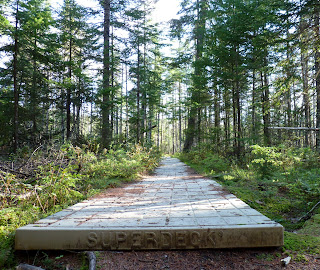 I spent a few days in the Adirondacks on a fishing trip. Of course I was also interested in finding birds. It was my first visit to the area but one place I just had to check out was Ferd's Bog which is a spot that is well known by many birders. The first thing I noticed when I entered the forest area leading up to the bog was the silence effect. It reminded me of being in a soundproof room where hearing tests are conducted. the only thing I could hear was the sound of birds singing and a slight ringing in my ears. The boardwalk leading out to the bog looked so inviting. It was like the yellow brick road in the Wizard Of Oz only this boardwalk was designed for birders (and other nature enthusiasts). 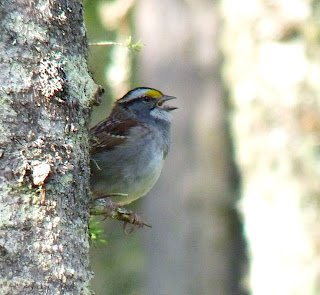 White-throated Sparrows sang to each other from across the forest. There was also a singing contest going on between a Black-throated Blue Warbler on one side of the path and a Magnolia Warbler on the other side. They never stopped singing the whole time I was there. Red-breasted Nuthatches were in the area. I could also hear the song of Boreal Chickadees in the treetops which sounded like Black-capped Chickadees with a pollen throat allergy. Unfortunately, I could never get a good look at them. 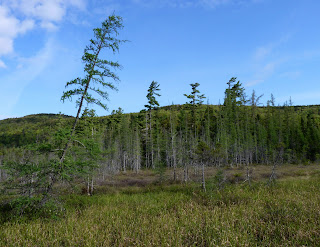 There was also plenty of bird activity near the bog. Common Yellowthroats were especially vocal. Purple Finches could be heard singing from the edge of the woods across from the bog.there were Tree Swallows flying overhead and a species of sparrows that I failed to identify before they flew off to another area.They looked like Lincoln Sparrows but I only had a quick glance. 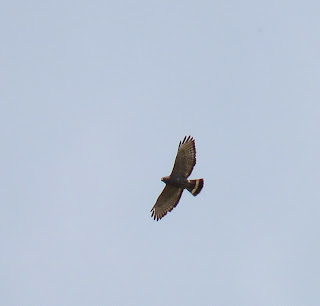 The lighting was not good at the time I saw this hawk fly over. The single white tail band on this buteo leads me to believe it is a Broad-winged Hawk. 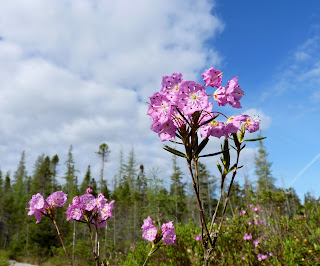 What kind of flowers are these? 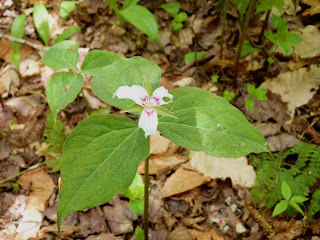 I'm guessing this is some kind of trillium.The trilium I usually see in Connecticut is red so I'll just call this White trillium. 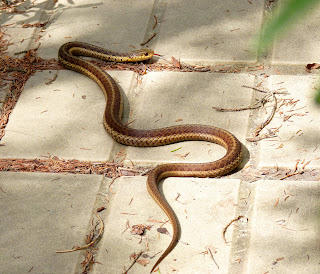 This snake wasn't shy at all. It looks like a Garter Snake to me so I'll just call it a garter Snake. 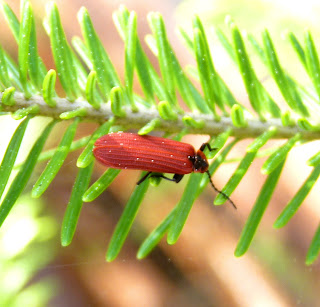 I'm not usually overly interested about insects but I received a Field guide To Insects And Spiders Of North America for Christmas. I used the book for the first time to learn that this is a Golden Net-winged Beetle. It says they live in coniferous forests which fit the habitat I was in. This book made it easy to find what I was looking for. Now I'm looking forward to identifying more strange insects.
click to play
My hope was that I would see my first Black-backed Woodpecker during my visit to Ferd's Bog but the only woodpecker I saw there was a Yellow-bellied Sapsucker. If I had been looking for black flies I would have hit the jackpot. I wouldn't be surprised if the BBWP showed up the day after I left. The majority of reported sightings there seem to start in June.
I may have came up empty in the Black-backed Woodpecker department but my visit to Ferd's Bog was definitely worth it. I leave you with the sweet whistling tune of the White-throated Sparrow (video) .
Posted by Larry at 5:21:00 PM 8 comments:

Do You Dare Leave Your Camera Behind? 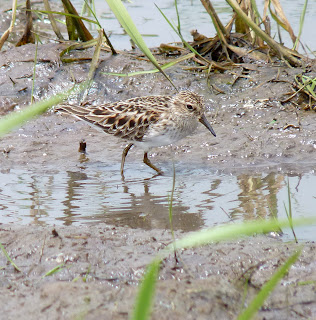 I took part in a local field trip last weekend with a small group of birders. We started out at a place called Great Pond Preserve in Glastonbury. It has lots of old cedars and a ravine that leads down to a glacial pond. We were literally running away from swarms of mosquitoes and the birds stayed well hidden so we didn't waste much time there. 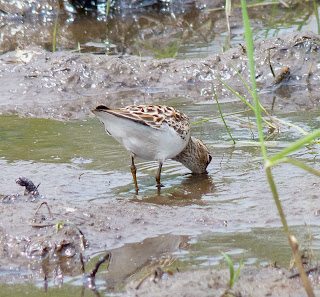 We had better luck at the next location which was a power line area in Portland. There were lots of Prarie Warblers there. It took a while before we were able to get good looks at them but we had a couple of instances when one landed just a few feet from us right out in the open. One of the birders in our group had never seen warblers before so that added some excitement.

After leaving that area, we went a short way up the road to the reservoir area.We had lots of interesting birds there including an Osprey, a nice look at a Yellow-throated Vireo and several species of warbler.The bird of the day for us was the Canada Warbler. You don't see them around here as often as other warblers.We saw two at eye level. They were flying from one side of a path to the other near the edge of a metal gate. Awesome view!

I had decided not to bring my camera with me because it detracts from my concentration while trying to help lead a trip. I wish that I had the picture to show you but then again I doubt it would be nearly as good as what I saw. Another thing is that I would have been staring at it through an electronic view finder and wouldn't have had such a great  view of it. All I have to show for the trip was these Least Sandpipers that we saw at the fairgrounds at the very end. I had to wiz though this post in 5 minutes because I'm off on a little adventure.
Posted by Larry at 5:43:00 AM 6 comments: 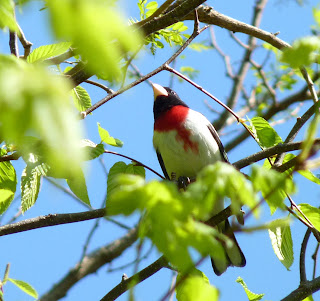 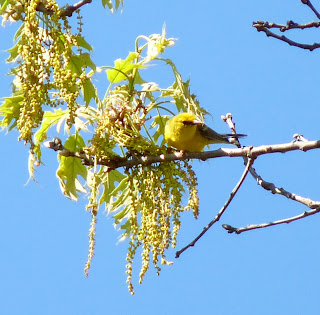 After the picture was taken several other species passed through including Black & White Warbler, Baltimore Oriole, Scarlet Tanager, and Yellow-throated Vireo. Sometimes it pays just to stay still and watch one tree for a while.
click to play
Later in the morning I stopped by the fairgrounds where I found so Greater Yellowlegs and Solitary Sandpipers racing across the mud puddles.
Posted by Larry at 6:12:00 PM 7 comments: 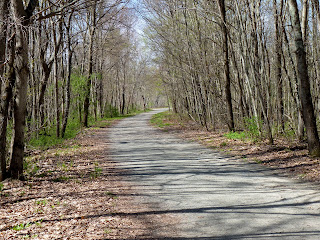 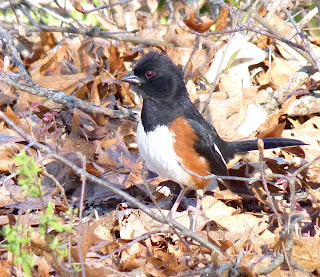 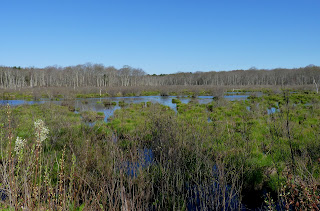 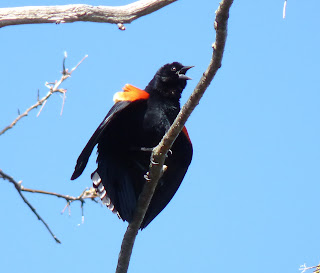 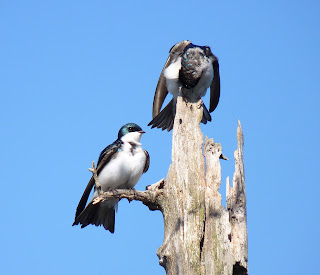 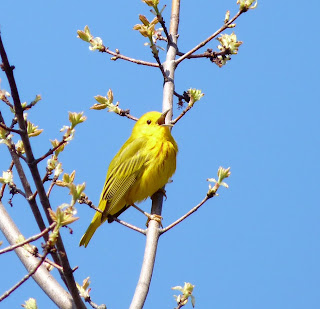 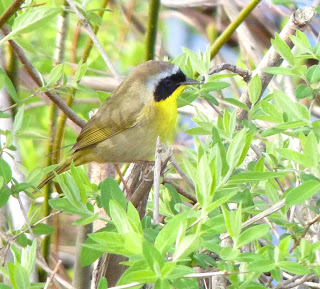 The thing that makes this such a special place isn't so much the number of species you see but how well you are able to see them. This also means that you get plenty of good photo opportunities. I plan to return here and make visits to many other areas along the rail trails this year.
Posted by Larry at 1:09:00 PM 13 comments: